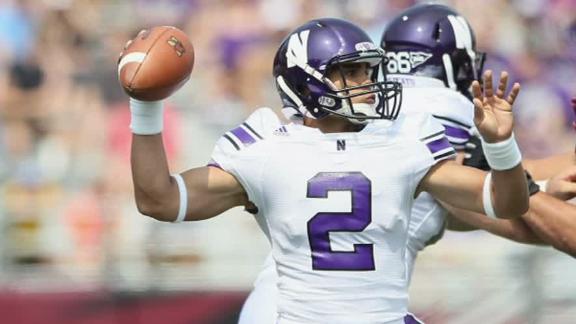 ARLINGTON, Texas -- Change is coming to the NCAA, but it's not necessarily the sort of change athletes would want entirely.

In a wide-ranging press conference at the Final Four, NCAA president Mark Emmert and other college administrators discussed pending change to the governance structure that will likely include cost of attendance and autonomy for the power conferences.

But the group drew a line in the sand at the thought of unionization for athletes.

"To be perfectly frank, the notion of using a union employee model to address the challenges that do exist in intercollegiate athletics is something that strikes most people as a grossly inappropriate solution to the problems," Emmert said Sunday. "It would blow up everything about the collegiate model of athletics."

The National Labor Relations Board recently ruled that it agreed with a filing made by Northwestern football players that they qualify as employees of their schools and can unionize.

It is the first of what many anticipate will be a long, drawn-out process filled with appeals and dialogue from both sides -- but still a decision that has the potential to significantly alter how college athletics have been run essentially forever.

But those who would be on the other side of the bargaining table, so to speak, are clearly prepared to fight such significant change.

"There's some things that need to get fixed," Emmert said. "They're working very aggressively to do that. No one up here believes that the way you fix that is by converting student-athletes into unionized employees."

What Emmert, the attending presidents and Big 12 commissioner Bob Bowlsby did agree on is that other changes need to come to the NCAA, and come quickly.

The Division I board of directors is expected to vote in August on major governance changes that could include awarding cost of attendance to athletes and would also allow the so-called power conferences to operate under a model slightly different than everyone else.

That last change has been met with some resistance by smaller schools, worried that it would only create an even deeper chasm between the haves and have-not schools in Division I.

But Emmert and the committee members said that they believe the resistance is not so strong and that they fully expect the proposals to be met.

"I think that most of Division I memberships see that we're standing at a fork in the road," said Kirk Schulz, president of Kansas State University and a member of the Division I steering committee for governance. "What we're going to put out there is not perfect, but I believe the vast majority of members recognize that we need to do it rapidly.

"So I'm very optimistic that we're going to have some no votes. But I think at the end of the day, there's a realization that if you don't do this, that we could be in some real trouble."

Collegiate Sports At A Crossroads
ESPN.com's Dana O'Neil and John Gasaway discuss the impact that player unionization could have on the NCAA and college sports.

Future Of NCAA Athletics
Jay Bilas and Tom Farrey discuss the merits of a free market system in college athletics and the future of NCAA athletics.