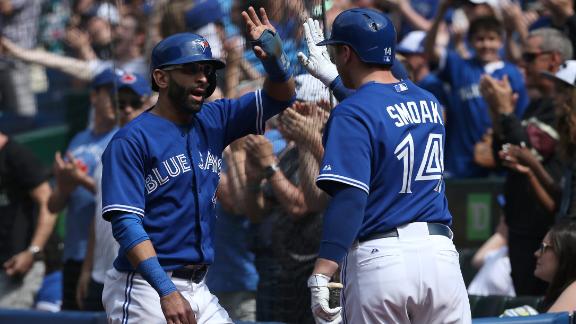 Joyce was scratched from the Angels' game Monday afternoon inTorontoafter he arrived late to the park.

The Angels followed a standard Sunday afternoon game in Baltimorewith a more unusual series-opening Monday matinee game in Toronto as the Blue Jays were celebrating the Canadian holiday Victoria Day.

"It was a mistake," Joyce said Tuesday. "It's definitely something that will never happen again. Obviously I felt terrible about it."

Joyce is hitting .143 in his first season in Los Angeles, but he was slated to DH for the Angels in their 10-6 loss to the Blue Jays on Monday.

Stating the situation has "been handled," manager Mike Scioscia returned Joyce to the lineup, batting him sixth and playing him in left field for Tuesday's game, which takes place at the harder-to-sleep-through time of 7:07 p.m. ET.