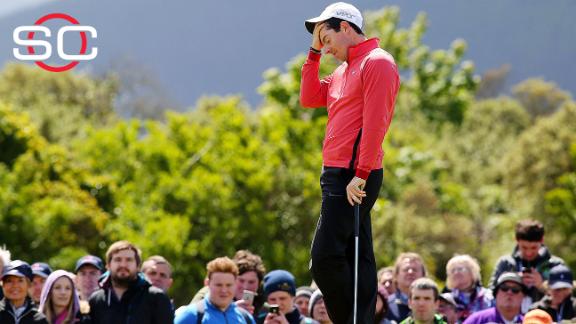 Rory McIlroy suffered a nightmare first round at the Irish Open as he shot his highest total since his final-day Masters meltdown in 2011.

The world No. 1 reached the turn at 41 and finished with a nine-over 80, leaving him dead last of the morning's 78 starters.

McIlroy is now in danger of missing the cut at his home event for the third successive year.

"It was not quite as difficult as I made it look," said McIlroy. "It's disappointing because I want to go out there and play well, not just for myself but for a lot of other people.

"My goal will be to make some birdies, make my first birdie of the tournament at some point. I'll just have to pick myself up and go out there tomorrow and shoot a good one."

Rickie Fowler carded a 71 to move two shots off Danny Willett and Soren Kjeldsen, who share the early lead at two under.

McIlroy, though, failed to hit a single birdie along with Martin Kaymer (79) in windy conditions at Royal County Down on Thursday, having missed the cut at Wentworth.

"I want to give them something to cheer about and not just get sympathy claps as I got coming off the ninth green," added McIlroy.

"I felt like I put myself in good positions off the tee but I was caught between trying to play two ways. I was hitting it well on the range, keeping it down and hitting half shots, but the wind was not up that much on the course and that led to missing greens, which led to lots of eight to 12-foot putts for par, which led to missing all of them."

Former champion Padraig Harrington impressed in the afternoon's slightly easier conditions to post a four-under 67, which was later matched by Max Kieffer.

Harrington, who enjoyed his first victory on a major tour since the 2008 US PGA at the Honda Classic in March, rallied from one-over after 10 holes to card five birdies in his next six.

"After nine or 10 holes I thought to myself 'C'mon, we've got to hit a good shot, no need to be afraid,'" Harrington said.

"I know from experience now that I'm in a position where there's many ways of competing in this tournament. I've two options; play great from now on and try and get away from the field or play average and fight it out on Sunday afternoon."

Soren Hansen is a shot further back at three-under, while Englishman Danny Willett sits two-under after his opening round of 69.

Elsewhere, former world No.1 Luke Donald carded a 70 to move one-under. The Englishman dropped out of the world's top 60 on Monday and misses out on qualifying for the US Open. However, a top 10 finish in Northern Ireland may see him earn one of the three available places for the Open at St Andrews.

"I'm trying not to think about that too much, I'm just trying to play a solid tournament and get some consistency," Donald said.