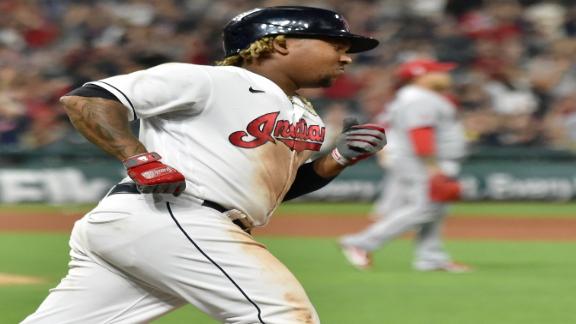 CLEVELAND -- - Triston McKenzie struck out Shohei Ohtani three times while pitching two-hit ball into the eighth inning, leading the Cleveland Indians to a 5-1 win over the Los Angeles Angels on Saturday.

Ohtani leads the majors with 40 home runs, but struck out swinging in the first, third and sixth. The matchup had the crowd of 31,406 at Progressive Field buzzing and the ovation for McKenzie grew louder with each at-bat between the two.


"I felt like I made some really good pitches," McKenzie said. "I kind of felt bad for him because I don't think I threw any nasty pitches like that to anybody else. When you face superstars like him, when you face, when we were in Toronto and you face Vlady (Vladimir Guerrero Jr.), you face (George) Springer, you face guys like that you get super locked in on the mound."

McKenzie struck out eight and was pulled after walking José Iglesias to begin the eighth - the only free pass he allowed. The right-hander was charged with a run when Iglesias scored on Jo Adell's groundout with Bryan Shaw pitching.

McKenzie was given a standing ovation by the Indians' biggest crowd of the season after being removed by interim manager DeMarlo Hale.

"On top of having a good start it's kind of like a euphoric feeling that people are physically there recognizing it, so it was very, very cool," McKenzie said. "And there was a lot of people in the house tonight."

McKenzie didn't tip his cap when he walked to the dugout, but explained he had a good reason.

"If my hat fell off my hair was going to look bad and they probably would have all laughed at me," he said.

The 24-year-old McKenzie (3-5) was coming off a dominant performance at Detroit, carrying a perfect game into the eighth inning of an 11-0 victory.

"He's good, he's really good," Angels manager Joe Maddon said. "He's a classic example of a tension-free approach. Everything is fluid and easy. I know his numbers were not good earlier in the year, but right now he's a strike-thrower. He's something to be reckoned with in the future."


Maddon knew the hitters could be in for a long day with the game starting at 4:10 p.m.

"It's a tough time to play the game, quite frankly," he said. "Anybody who wants to argue against that, I would say go stand in the batters' box, see what that baseball looks like. But I'm not even trying to intimate that he was successful because of the shadows. He's really good."

José Ramírez homered for Cleveland for the third straight game, hitting a three-run drive off Reid Detmers (1-3) in the third. Amed Rosario homered to lead off the seventh.

Ramírez doubled off the wall in the first, but Rosario was cut down at the plate by a strong relay throw. Ramírez left no doubt in his next at-bat, clearing the wall in left-center following singles by Myles Straw and Rosario. It was his team-high 29th homer of the season.

McKenzie was in the rotation when the season began, but control issues led to several trips between Cleveland and Triple-A Columbus.

Angels star Mike Trout is planning to play again this season despite being sidelined since May 17 with a calf injury. The three-time AL MVP said Saturday he hasn't given any thought to shutting down for the year.


The teams will finish the three-game series Sunday night as part of Major League Baseball's Little League Classic in Williamsport, Pennsylvania. Ohtani likely will be the center of attention.

"If it's any reaction like he gets at the ballpark I'm sure it's going to be pretty exciting," Trout said. "I'm trying to have him take batting practice at the Little League Field, see how far he can hit them. That'd be pretty fun. What he's doing on the field, I can't put anything else to it. I've never seen anything like it."

Angels: RHP Alex Cobb (sore wrist) has been shut down indefinitely after having a setback while throwing.

Indians: RHP Aaron Civale, who has been out since June 22 with a sprained middle finger, will make a minor league rehab start for Double-A Akron on Sunday.

RHP José Suarez (5-6) will start for the Angels on Sunday against RHP Cal Quantrill (3-2).