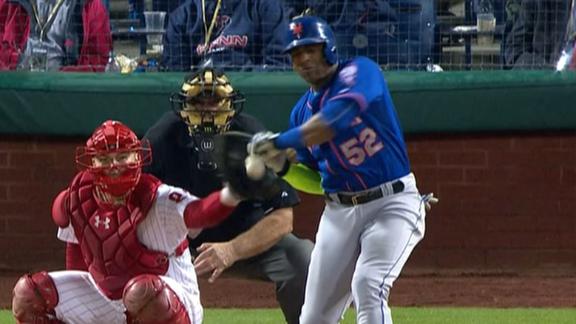 PHILADELPHIA -- The New York Mets dodged a bullet Wednesday when outfielder Yoenis Cespedes was hit by a pitch on the left hand but escaped with no fractures.

Cespedes departed after getting struck by a third-inning fastball from Philadelphia Phillies reliever Justin De Fratus in an eventual 7-5 loss by the Mets. X-rays were negative. The team announced that Cespedes had suffered bruises to the middle and ring fingers.

"When I first got hit, I felt a lot of pain," Cespedes said through a team spokesman. "I didn't think it was that bad right away, but I was relieved when the X-rays came back negative."

Cespedes told manager Terry Collins afterward that he would be capable of playing in Thursday's series finale, but Collins said the Mets will wait until the weekend to try to get Cespedes back into the lineup.

"That's always a scary place when you get hit," Collins said. "We'll give him a day tomorrow and let his hand heal up a little bit and get him ready for the weekend. We were very relieved that he's OK."

Cespedes' arrival from the Detroit Tigers at the non-waiver trade deadline helped transform the Mets' moribund offense into a credible threat during the final two months of the regular season. He is hitting .287 with 17 homers and 44 RBIs in 223 at-bats with the Mets since the deal, while splitting time between center field and left field. Overall, he has set career highs this season with 35 homers and 105 RBIs.

An inning after Cespedes departed, shortstop Wilmer Flores also left the game. Flores was diagnosed with muscle spasms in his back. He said the issue affected him on the field and on the basepaths but not at the plate. Flores told Collins he could "hardly run" upon reaching third base in the fourth inning. He was pulled at that point.

Flores said he had not previously experienced back issues in his career.

"I felt like there was no reason for me to stay out there," Flores said.

After Cespedes and replacement Kirk Nieuwenhuis were hit by pitches, Mets starter Logan Verrett responded in the fifth by drilling Odubel Herrera in the back. At that point, both benches were warned by plate umpire Bob Davidson.

Things escalated, though. With catcher Travis d'Arnaud setting up outside, Mets reliever Hansel Robles delivered a quick pitch to Cameron Rupp that veered toward his head in the sixth inning. The benches cleared, and Robles and Collins were ejected. No physical confrontation ensued.

Collins acknowledged that Robles had no business throwing near Rupp's head.

Although Rupp was set, Davidson actually was stunned by the quick pitch.

Robles had irritated the Phillies a month ago in Philly by delivering a quick pitch when Darin Ruf was not looking. That time, the benches emptied, too.

"The guy who wasn't ready was the umpire, to be honest," Collins said. "When you see the replay, Bob wasn't even in his stance yet. ... You can't miss that bad. It's one thing to miss inside -- if the catcher is sitting in.

"Up around the head, I certainly understand it," Collins said about the ejection.

Collins subsequently advised Robles to ditch the controversial slide-step pitch, because he has yet to throw a strike with it anyway, according to his manager. Robles, however, offered no indication postgame that he planned to shelve his quick pitches.

"I think there's nothing wrong with my quick pitch," Robles said through an interpreter. "It only creates a little bit of an issue with this team. This is the only team that's given me trouble. I'm going to continue to do it."

Meanwhile, the Mets did get other favorable medical news on Wednesday. Left-hander Steven Matz, scratched from Thursday's start with upper back stiffness, was examined by a doctor, diagnosed with spasms and given medication. Collins said Matz felt significantly better by late Wednesday and should be on track to log innings this weekend against the Washington Nationals at Citi Field.

"It looks like he's going to be just fine," Collins said. "It's just a muscle spasm more than anything else, so they've got that muscle to calm down. He already feels better."

Sean Gilmartin will start in place of Matz on Thursday in Philadelphia, with Tim Stauffer due to follow Gilmartin.