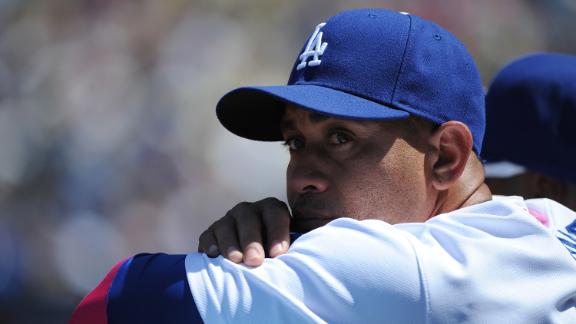 Miguel Olivo, accused of biting off part of teammate Alex Guerrero's ear in a dugout altercation Tuesday, has been suspended by the Los Angeles Dodgers for his part in the incident.

The Dodgers announced Wednesday that Olivo will remain on the suspended list at Triple-A Albuquerque, "pending the completion of an investigation." The Dodgers have had little comment about the altercation, which sent Guerrero to the hospital and could cause him to miss as much as five weeks, according to sources.

Agent Scott Boras, who represents Guerrero, said Tuesday that his client needed plastic surgery on his ear as a result of a bite from Olivo. Neither Olivo nor his representatives have commented publicly.

Guerrero, the Cuban infielder signed for $28 million this past winter, remained on the Albuquerque roster as of Wednesday evening.

According to the Salt Lake City police, Guerrero declined to file a complaint with the police about the incident, which would have been the first step toward criminal prosecution.

Last season, Olivo was placed on the restricted list by the Miami Marlins after he left the team without permission.

Olivo also has displayed a hot temper on the field before, charging at Jose Reyes and missing with a wild punch during a dustup between the Marlins and New York Mets late in the 2007 season.

Ironically, in a spring training interview with Telemundo posted by SB Nation, Olivo said that if he weren't a baseball player, he would like to be a boxer like Mike Tyson -- but without biting an ear off.

Tyson infamously bit off part of Evander Holyfield's ear during a 1997 bout.

Olivo Suspended For Biting Incident
ESPNLosAngeles.com's Mark Saxon discusses the suspension of Miguel Olivo for allegedly biting off part of teammate Alex Guerrero's ear during a dugout altercation on Tuesday.

Guerrero's Ear Partially Bitten Off In Scuffle
ESPNLosAngeles.com's Mark Saxon discusses the dugout altercation between infielder Alex Guerrero and Miguel Olivo that resulted in Guerrero's ear being partially bitten off, according to Guerrero's agent, Scott Boras.