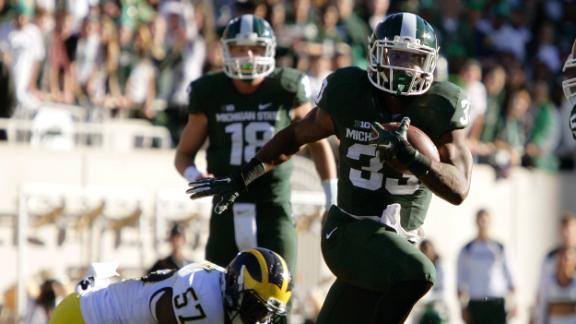 EAST LANSING, Mich. -- Another dominant Michigan Statewin won't extinguish the flames of its annual showdown with its neighbors from Ann Arbor.

Coach Mark Dantonio made sure of that by dumping gasoline on the heated rivalry after a 35-11 win at Spartan Stadium on Saturday night.

With his team comfortably ahead by 17 points late in the fourth quarter, Dantonio opted to keep swinging at a Michigandefense that had long been on the ropes. Senior Jeremy Langford pounded in his third score of the day with 28 seconds left in the game. The parting shot wasn't an attempt to add some style points to Michigan State's 13th straight conference win, Dantonio said, but retaliation from a perceived slight before the start of the game.

Michigan players planted a stake on the Spartan Stadium turf after running onto the field before the opening kickoff. Michigan State players and their coaches took notice and decided to keep exacting their revenge until their final offensive play of the game.

"It just felt like we needed to put a stake in them at that point," Dantonio said when asked about the final score.

Spartans players have long felt disrespected by the more tradition-laden Michigan program that they say exudes arrogance. The most cited example came in 2007, when Wolverines running back Michael Hart said defeating Michigan State was like beating his "little brother."

At the time, Michigan had won six in a row against Michigan State and was in a much better position in the Big Ten. The Spartans, defending league champions, won Saturday for the sixth time in the last seven games between the two rivals.

"I can only be diplomatic for so long," Dantonio said. "The little brother stuff, all the disrespect, it didn't have to go in that direction.

"We try to handle ourselves with composure. That doesn't come from a coach. It comes from the program. Throwing the stake down in our backyard out here and coming out there like they're all that. That got shoved up ... It got shoved in the last minute and a half."

Michigan coach Brady Hoke said he was aware that something might have happened with his players before the game, but wasn't sure about the details.

Spartans quarterback Connor Cook helped the set the tone for a physical afternoon when he bowled over a Michigan safety at the end of a run on the game's opening drive. Langford, who grew up 30 minutes from Ann Arbor, scored his first touchdown of the game on the following play. He finished the game with a career-high 35 carries and 177 yards.

Cook said seeing Michigan players plant a "dagger" on the field fueled him early in the game.

"They disrespected us right out of the gate," Cook said. "We weren't having that."

Michigan State Handles Michigan
Connor Cook threw for 227 yards and one TD in No. 8 Michigan State's 35-11 win over Michigan.