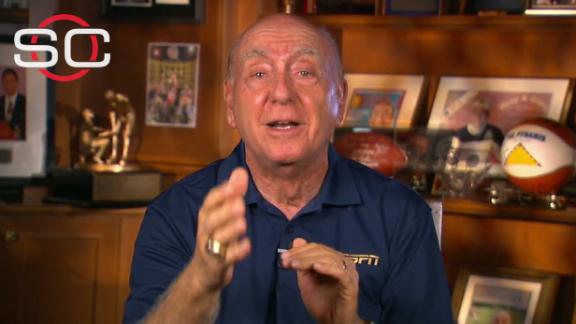 Northern Iowa's halfcourt buzzer-beater that sent Texas home punctuated a historic opening round Friday, matching the record for first-round upsets based on seed since the NCAA tournament expanded to 64 teams in 1985.

A game-ending, two-handed dunk by Cincinnatithat was waved off by game officials capped the opening round moments later, after the No. 11 seed Panthers'dramatic win over the sixth-seeded Longhorns became the 13th upset of the first round.

The ninth-seeded Bearcats missed the 14th upset by a split second, falling to No. 8 Saint Joseph's.

The number of first-round upsets tied the 2001 NCAA tournament, which was also highlighted by a No. 2 seed's ouster to a No. 15, when Hampton knocked off Iowa State 58-57 with a 14-2 run to close out the game.

The Cyclones' loss was considered by many then as the greatest upset in NCAA tournament history, a place now potentially belonging to Michigan State after theSpartans' exit Friday at the hands of Middle Tennessee.

The spate of upsets -- this year's 10 wins by double-digit seeds is the most in a NCAA tournament (there were nine in 2001 and 2012) -- comes in the third year since the NCAA overhauled how it seeds the tournament as it seeks to place teams where they naturally belong, bucking rules such as when conference teams can meet in the tourney, which often required movement of a team up or down.

The biggest conference winner so far might be the Missouri Valley, which had Wichita Stateroll through Vanderbiltin a play-in game before the Shockers' easy win over Arizona. Northern Iowa's heart-stopping victory over coach Shaka Smart's Longhorns made it a banner week for the mid-major conference.

"At this point, you're running on adrenaline," Wichita State coach Gregg Marshall said. "We've got a lot of work to do, and we've got a great opponent tomorrow [in Miami]. But it has been just a very grueling, very taxing several days, but it's been fun all the same."

Michigan State was the predicted champion of about one-quarter of ESPN and Yahoo! brackets but gets one of many surprise trips home.

There was third-seeded West Virginia losing to Stephen F. Austin, fourth-seeded Cal floundering against Hawaii and sixth-seeded Arizona getting shocked by Wichita State. No. 5 seeds Baylor and Purdue went down Thursday, while No. 10 seeds Syracuse and VCU joined No. 11 seed Gonzaga in surviving.

"There's such great college stories this time of year, every year. We looked at it and said, 'Guys, why not Middle Tennessee?'" Blue Raiders coach Kermit Davis said. "It's going to be something after this weekend, and everyone is going to have a great, great moment."

Just like the one the Shockers had, same with Yale and Little Rock, who advance as 12-seeds.

In a season with this much parity, no seeding has proved safe.

"A couple of years ago, when we got an NCAA win they thought it was almost a fluke," he said. "But I think now people are starting to realize that Stephen F. Austin is a really strong basketball program and really starting to make a name for ourselves."

Plenty of teams that expected their 2016 legacy to last longer won't get that chance.

Start with the Mountaineers, who looked like a Final Four contender in giving overall No. 1 Kansas all it could handle in the Big 12 tournament. They were soundly beaten by a Lumberjacks team playing its very own style, popping loose a plethora of turnovers and turning them into easy layups.

West Virginia's problems paled next to those at California, where a scandal involving an assistant coach and an injury to the Golden Bears' leading scorer contributed to their loss.

"I mean, it's tough for young guys to overcome," Cal coach Cuonzo Martin said. "We still have to lace them up and play the game. I think Hawaii won the game. Obviously, a lot of factors -- you can say this or that, but they won the game."

But no surprise of the many that dramatically shifted the atmosphere of March Madness during the round of 64 can top Michigan State, the second favorite to Kansas in Las Vegas sportsbooks after Selection Sunday.

"I don't care about next year. I don't even care about tomorrow right now," Tom Izzo said after his team's listless 90-81 loss. "Somebody's not happy unless they win it all. It just was disappointing that we didn't move farther than we did."

Information from The Associated Press and ESPN's Stats & Information was used in this report.