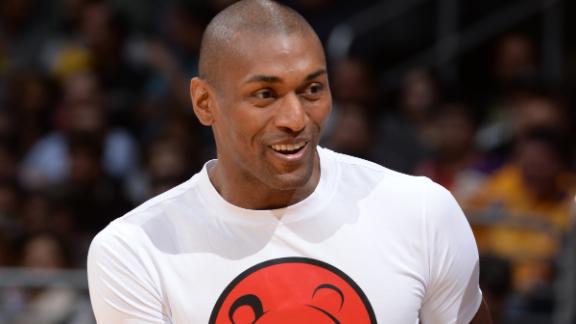 MILAN -- Heading into the swan song of his career, former NBA All-Star Metta World Peace is a changed man.

World Peace, who signed for Pallacanestro Cantu in a move the Italian team called "the coup of the century," is known as much for his controversies as for his on-court talent.

"I had an up and down career," the 35-year-old World Peace said Thursday. "I grew up playing basketball on the streets of New York City and it was very, very rough and I started playing in the NBA in the same way.

"Now the mentality is different from when I was younger. I always had the street mentality, but when you're older, you get more mature."

World Peace, who said he will retire when he turns 40, said his new attitude has improved his performance on the court.

"When you play angry you can't focus," he said. "I've got five more years to have a great time, so I will be playing with a lot of fire but not anger, just passion."

World Peace, who changed his name from Ron Artest, was playing for the Sichuan Blue Whales in the Chinese Basketball Association after a long NBA career that included stints with the Chicago Bulls, New York Knicks and Los Angeles Lakers, where he won the title in 2010.

The forward averaged 19 points and six rebounds in 15 games for Sichuan -- where he changed his name to "The Panda's Friend" -- but with the Chinese season over, he has turned to Italy.

"I always wanted to play in Europe for a long time," World Peace said. "They move the ball and they move bodies and that's what I like doing. I'm looking forward to playing team basketball and being smart as well as scoring. I can score but I'm excited about team basketball."