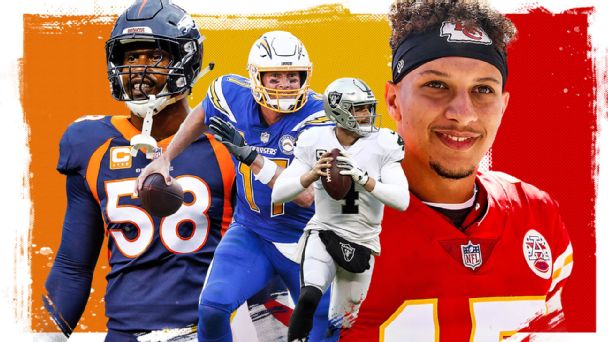 The start of a new decade is upon us with the 2020 NFL season. But before we get rolling with the '20s, ESPN is taking a look back at the best -- and worst -- of the 2010s and naming the top players of the decade for all 32 teams.

From the social media star of the decade to the worst call by a referee, ESPN's NFL team remembers the people and moments of impact -- good and bad -- from the past 10 years. And NFL Nation reporters select the two best players of the decade from their teams, the top coach and assemble all-division teams of the 2010s.


It all kicked off Monday with the best and worst of the NFL from the past decade.

AFC West players of the decade

The Broncos won five division titles during the decade, went to two Super Bowls and won Super Bowl 50, so there are plenty of candidates to be the team'splayer of the 2010s -- but Miller simply rose above in performance and number of games played. The Broncos' first-round pick in 2011 -- No. 2 overall -- was an eight-time Pro Bowl selection in the 2010s, a three-time first-team All-Pro and Super Bowl 50 MVP. He had 106 sacks in the decade, with seven years with at least 10 sacks, to go with 26 forced fumbles. He has been a centerpiece of a defense that in 2015 was one of the best of the Super Bowl era. And he did it all with five different defensive coordinators and four head coaches.

Honorable mention: Demaryius Thomas, WR, 2010-18. A crowded field here, with a huge nod to cornerback Chris Harris Jr., who arrived as an undrafted rookie in 2011 and went to four Pro Bowls while leading the team in interceptions in the 2010s with 20. Also, Peyton Manning's four seasons were historic at every level. But Thomas, a first-round pick in 2010, had five consecutive seasons with at least 90 receptions and should be a Ring of Famer for the franchise. -- Jeff Legwold

Mahomes played just three seasons for the Chiefs in the decade and was a starter for only two, but those seasons were spectacular enough to make him the pick here by a wide margin. Mahomes' arrival in Kansas City transformed the franchise. The Chiefs were Super Bowl hopefuls but not serious contenders in the handful of seasons before his arrival. Their 1-4 playoff record with his predecessor, Alex Smith, at quarterback is testament to the fact the Chiefs needed a boost to get over the hump. In his two seasons as a starter, Mahomes is 4-1 in the postseason. He delivered one of the most spectacular quarterback seasons in NFL history in 2018 and the Chiefs' first Super Bowl championship in 50 years in 2019.

Honorable mention: Travis Kelce, TE, 2013-present. The Chiefs had some strong choices for this pick, but none were as consistent as Kelce, who averaged 85 catches and 1,078 yards the past six seasons. Last year, he became the first tight end in NFL history to have four straight 1,000-yard seasons. -- Adam Teicher

Continuity has to count for something, right? And with the Raiders in search of Rich Gannon's replacement ever since he broke his neck in Week 3 of the 2004 season -- 15 different quarterbacks started for the Raiders between Gannon's injury and 2013 -- they found their face of the franchise in the second round of the 2014 draft. Sure, Carr's 55 losses are the second most by a QB in his first six seasons in the NFL, one behind older brother David. And yes, his holding the Raiders' career passing yardage mark is akin to Eric Karros having the most home runs in Los Angeles Dodgers history. But while Carr is the most polarizing figure in recent franchise history -- he was booed out of the Oakland Coliseum following the team's final game there -- he does hold every major team career passing record, as well as a five-year, $125 million contract. And that does count for something.

Honorable mention: Khalil Mack, OLB/DE, 2014-17. The first player to be named first-team All-Pro at two different positions (outside linebacker and defensive end) in the same year followed up that 2015 season by being named the NFL's defensive player of the year in 2016. But rather than play on his $13 million fifth-year option in 2018, Mack held out and forced a massive trade to the Bears. The Raiders got a pair of first-round picks in the deal and used them on RB Josh Jacobs and CB Damon Arnette. -- Paul Gutierrez

An easy choice, as Rivers started every game of the decade for the franchise and threw for at least 4,000 yards in nine of those seasons -- with five 30-touchdown seasons in the decade. Peyton Manning and Patrick Mahomes essentially kept the Chargers at bay for much of the decade, so the Chargers made the postseason just twice over the past 10 years (2013 and 2018). Rivers also saw his share of coaching/offensive coordinator changes -- three different head coaches, five different offensive coordinators (Ken Whisenhunt had two separate stints among the six changes). Bottom line, Rivers is the franchise's all-time leader in passing yards, touchdown passes and completions.

AFC West coach of the decade

Reid's accomplishments in his seven seasons with the Chiefs could win this award on their own. The Chiefs made the playoffs six times under him, including the past four years as AFC West champions. Last season they won the Super Bowl for the first time in 50 years. But Reid's achievements in Kansas City have to be viewed from where the Chiefs were when he arrived in 2013. They were a mess then, having gone through a dismal 2-14 season in 2012. The Chiefs won four games or fewer in four of the six seasons before his arrival. -- Adam Teicher

Honorable mention: John Fox, Broncos, 2011-2014. Von Miller being the team's first draft pick on his watch in 2011 and Peyton Manning's arrival in 2012 certainly didn't hurt Fox's cause, but his teams went 4-for-4 in AFC West titles and went 46-18 in his four seasons in Denver. He was fired after a disappointing playoff loss to the Indianapolis Colts to close out the 2014 season, when a tepid-looking Broncos team went down 24-13 at home. -- Jeff Legwold 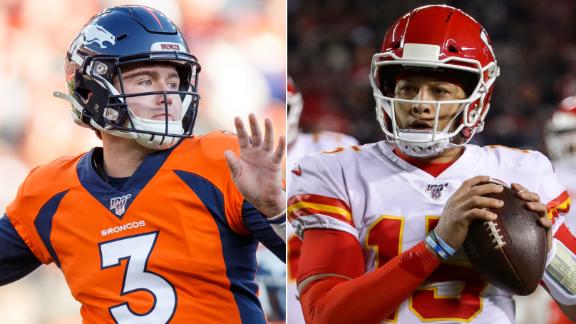