KABC
By ABC7.com staff
NASHVILLE, Tenn. (KABC) -- Looking to address a need at defensive tackle, the Los Angeles Chargers selected Jerry Tillery of Notre Dame in the first round of the NFL Draft.

The Los Angeles Rams had the 31st pick in the first round but traded the spot to the Atlanta Falcons.

Tillery led the Fighting Irish with 12.5 sacks since the 2016 season. 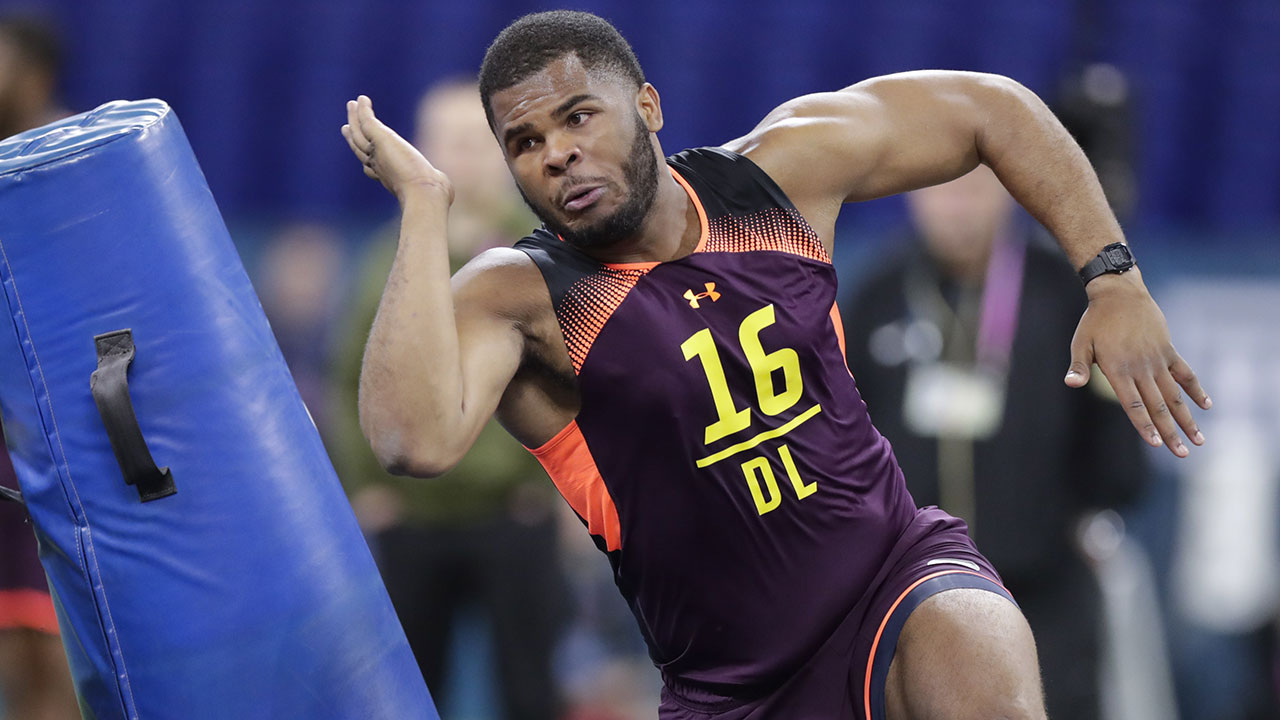 Notre Dame defensive lineman Jerry Tillery, seen at the NFL scouting combine on March 3, 2019, has been drafted by the Los Angeles Chargers.

He was a second-team selection to The Associated Press All-America team after leading the Fighting Irish in sacks (eight) and forced fumbles (three). He had 30 tackles, including 10 for loss, and five quarterback hurries to help lead Notre Dame to the College Football Playoff semifinals.

The 6-foot-7, 305-pound Tillery played in 50 games during his collegiate career and recorded 13 sacks. He had shoulder surgery in March but is expected to be ready by the start of the season.

Los Angeles tied for the best regular-season record in the AFC last season at 12-4, but depth on the defensive line has taken a hit during the offseason. They released Corey Liuget prior to the start of free agency while Darius Philon and Damion Square departed as unrestricted free agents. The Chargers have one of the better defensive end combinations in the league in Joey Bosa and Melvin Ingram and they re-signed Brandon Mebane to man one of the defensive tackle spots.

This is the third time in the past four years that general manager Tom Telesco has taken a defensive player in the first round. He selected Bosa with the third overall pick in 2016 and took safety Derwin James 17th overall last year.

The Draft is airing live on ABC7 Thursday, Friday and Saturday.

ABC's Robin Roberts is leading the coverage from Nashville and Taylor Swift will join her as will other celebrities with Music City ties like Luke Bryan.

The Chargers have seven picks in the draft overall and are expected to address needs at linebacker, free safety and guard in the next rounds.

The Rams made it to the Super Bowl last year and are hoping this year's draft can give them the extra boost they'll need for next season.

They had seven picks overall coming into the draft before trading their first round to Atlanta.

"With the 31st pick you're essentially just watching all day and hoping things break your way," Demoff said. "But you're preparing for maybe seven, eight different scenarios, versus when you're picking higher and can key in on a few guys. I know (general manager Les Snead) and the scouts and (coach Sean McVay) and the coaches have found players they like."

Demoff said it is key to keep bringing in young talent on rookie contracts because many of the team's younger stars are on the verge of getting bigger deals based on their proven success.

Robin Roberts spoke to ABC7 this week about the draft and about some of the stories she's heard from the young college players hoping to turn pro.

"There was one young man I was speaking to," Roberts recalled. "His mother passed away when he was 12 years old, passed away of breast cancer. He promised his mom he would take care of his three siblings."

"So for him, he thinks of his mother all the time, goes and visits her gravesite. And I get chills when I think about him talking about his mother and knowing this moment is going to happen for him and for his family."

There will also be a range of free concerts in town this week, headlined by country music stars Dierks Bentley and Tim McGraw.

McGraw will perform in a free concert from the draft's main stage after all the picks are announced Friday. Bentley will perform at the end of Saturday's picks.

Singer and "American Idol" judge Luke Bryan is also in town taking part in the television coverage and festivities.

Swift is expected to have some surprises for her fans this week in Nashville.

Earlier Thursday, Swift appeared in Nashville, posing in front of a colorful one-of-a-kind mural. It features a butterfly, hearts, rainbows, and a cat. She also stopped to take a few selfies with her loyal fans in Nashville's Gulch neighborhood.

On Instagram, Swift thanked the artist who painted the mural, saying "@kelseymontagueart helped me pull off the best surprise clue reveal today in Nashville! Thank you to everyone who showed up, I've never been more proud of your FBI level detective skills. Next clue: I'll be joining the magnificent @robinrobertsgma for a chat tonight on ABC live from Nashville."

ABC7 PROGRAMMING NOTES:
The airing of the NFL draft will postpone some of ABC7's regular evening programming Thursday and Friday.

Wheel of Fortune note: If you are unable to see Thursday's episode due to pre-emptions and coverage of the NFL Draft, "Wheel of Fortune" will accept any entries submitted on wheeloffortune.com by 2:59 PM PT on Friday, April 26 and Saturday, April 27 as valid for the Hawaii Vacation Giveaway, regardless of which Bonus Puzzle Solution you enter. For details and to enter visit wheeloffortune.com.