NHL Power Rankings: The hidden MVP for all 31 teams 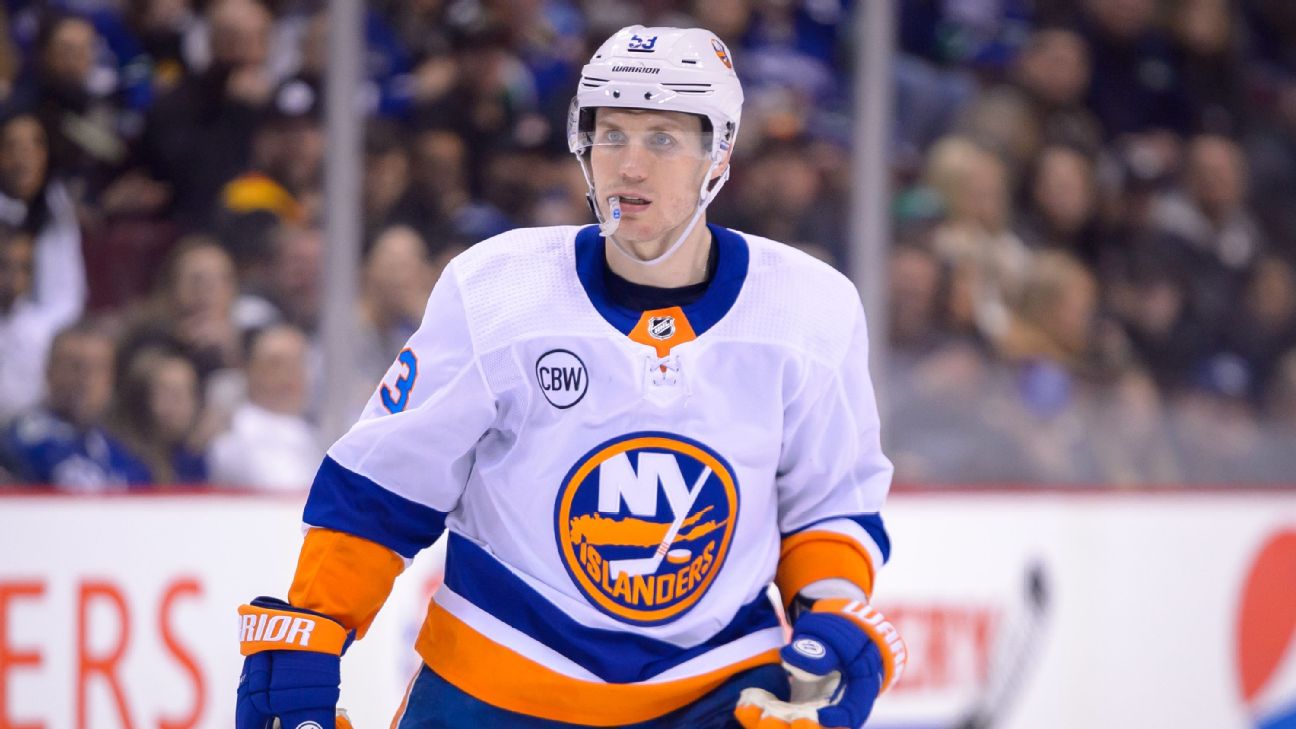 But what about the players who are vitally valuable to their teams but don't get that spotlight?

This week in the NHL power rankings, we focus on the Hidden MVPs for all 31 teams -- in other words, players who have played an important role in their team's fate, even if they're only a silver lining in a giant toxic cloud.

How we rank: The ESPN hockey editorial staff submits polls ranking teams 1-31, and those results are tabulated to the list featured here. Teams are rated through Tuesday night's games, taking into account overall record, recent success and other factors, such as injuries.

Anthony Cirelli: The 21-year-old rookie has been a defensive force for the Lightning this season, leading them in faceoff percentage and taking advantage of a bump up in penalty-killing ice time to score five shorthanded goals. Overall, he has 18 goals and 19 assists and is among their top forwards in possession.

David Krejci: For being the second-best team in the Eastern Conference this season, the Bruins have had their share of injury adversity. The constant has been Krejci, who not only hasn't missed a game in 2018-19 but has posted his best offensive season (0.86 points per game) since 2016.

Matthew Tkachuk: While certainly on the radar for opponents like Drew Doughty -- Tkachuk owns some lovely beachfront property in his head -- his leap as an offensive player has been palpable, with 34 goals in 76 games. In the Flames' first 47 wins, Tkachuk had 62 points.

John Carlson: You could argue an All-Star can't be "hidden," but his overall contributions this season really haven't been fully appreciated. Putting to rest concerns that last season was a contract-year anomaly, and quieting doubters to his status as an elite defenseman, Carlson is poised to set a new career high in points and ice time (currently skating 25:08 per game on average) for the defending champs.

Tomas Hertl: The Sharks have waited six years for Hertl to have this season. He busted out with 33 goals and 32 assists and shooting the lights out with a 19.9 percentage. That includes 10 power-play goals, a career high.

Ben Chiarot: Not exactly an analytics darling, but he's playing well over three minutes more per game on average than he has previously in his career and helped hold down the fort when the Jets lost Dustin Byfuglien (his typical partner) and Josh Morrissey (who otherwise would be their hidden MVP) to injury.

Kasperi Kapanen: The Leafs have several players battling for the MVP spotlight -- Mitch Marner, John Tavares, Frederik Andersen, Morgan Rielly, Auston Matthews -- but let's give this 22-year-old his props. Kapanen has 43 points in 72 games, playing more than five minutes more per game than he had as a rookie. He has played up and down the lineup and outpaces many of his teammates in 5-on-5 possession stats.

Mattias Ekholm: He has partnered with P.K. Subban most of this season, and it could be successfully argued that he has been the better defenseman, with a career-best 43 points while continuing to be a defensive rock.

Casey DeSmith: The 27-year-old netminder deserves credit for holding down the fort until Matt Murray could get healthy -- and getting his act together. In 28 games before the All-Star break, DeSmith went 12-9-4 with a .917 save percentage and a 2.68 goals-against average.

Cody Eakin: This totally would have been Alex Tuch if his post-All-Star break numbers weren't a horror show (nine points in 24 games). But Eakin is more than deserving, hitting a career high in goals (20) and standing two away from matching his career high in points, with 38 in 72 games. He plays in every situation and is a solid faceoff guy, although his underlying numbers aren't that stellar. But for one of the few players Knights fans didn't exactly take to in their Year 1 lovefest, he has proven his worth for the general manager who originally drafted him in Washington.

Casey Cizikas: He set career highs in goals (19) and points (30), does every little thing asked of him and anchors one of the team's most effective and momentum-altering lines with Matt Martin and Cal Clutterbuck, otherwise known to its detractors as "The Best Fourth Line in Hockey."

Vince Dunn: Talk about soaring under the radar. The 22-year-old defenseman followed a strong rookie season with an even better one offensively (33 points) and defensively (a relative Corsi of 5.2 percentage points better than his teammates). He has meshed well with a variety of defensive partners as well, when needed.

Brett Pesce. The defenseman missed nine games this season, but when he has played he's a difference-maker, especially on the Canes' sixth-ranked penalty kill. He also has hit career bests in goals (7) and assists (19), which isn't bad for a guy generally not known for his offense.

Josh Anderson: The 24-year-old forward has helped their postseason push with 21 points in his past 26 games and a strong defensive season as well: 46 takeaways, second most on the team.

Phillip Danault: One of the most effective even-strength players on the Habs -- 45 of his 49 points have come at 5-on-5 -- and a center having a Selke Trophy-worthy season, if the Selke wasn't such a reputation-based award.

Roope Hintz: Yes, his name looks like one of those word puzzles you unscramble on a movie screen before the film starts. But the Finnish rookie has 12 of his 17 points after the All-Star break, has drawn penalties and wins faceoffs like few on the team. His ice time has reflected that fact lately.

Samuel Girard: A jump in ice time this season didn't phase the 20-year-old defenseman, acquired in the Matt Duchene trade, as he has 24 points in 76 games and respectable defensive metrics. Yes, he gets a healthy dose of offensive-zone-start shielding, but there aren't many defensemen his age putting in the top-four work he has.

Brad Richardson: The veteran center had five goals in eight games in February and has generally been a spark-plug player for the Coyotes during their resurgent season.

Sean Couturier: Once again, it's hard to call a team's second-leading scorer and a Selke finalist "hidden," but Couturier hasn't yet reached that Patrice Bergeron-like level where great offense (31 goals) and stellar defense (6.9 relative Corsi percentage) add up to MVP consideration. He has been incredible for the Flyers this season.

Ryan Suter. With so many swings in consistency on the Wild this season, there's something to be said for a player meeting expectations. And 46 points in 77 games with just under 27 minutes on average in ice time and a positive possession rate is what you expect from Suter.

Alex DeBrincat: His growth year-over-year is one of the most promising things about this season's Blackhawks, with 38 goals and 33 assists in 76 games after his strong rookie season.

Evgenii Dadonov: An easy call here, as "Dad" has 25 goals and 38 assists in 77 games, on pace with last season's numbers on a significantly worse team.

Tobias Rieder: I mean, if the team's CEO says the Oilers would have been a playoff team if a guy skating 12 minutes per game had scored a few more goals, how is this person not the most valuable player?

Jacob Markstrom: The goalie had a goals saved above average of 3.75 and posted a 27-22-9 record in 58 games for a team that was supposed to be in transition. These were similar numbers to last season's performance, but he might have been just a bit better this season, if only because the defense in front of him was more porous.

Evan Rodrigues: The Sabres' collapse this season was a humbling one, but the play of this 25-year-old forward was a bright spot. He had 27 points in 70 games -- both career highs -- and has likely earned himself a nice contract as he hits restricted free agency this summer.

Hampus Lindholm: In a giant mess of a season for the Ducks, their standout defenseman wasn't bad: 26 points in 72 games, skating a career high 24:05 per game on average.

Mika Zibanejad: He's led the Rangers with 68 points through 75 games, including five game-winning goals among his 28. Again, a leading scorer might not be a "hidden" MVP to his team's fans, but Zibanejad deserves a spotlight for how well he has played in a mulligan of a season.

Nico Hischier: The answer should be "Taylor Hall" given how humbled the Devils were in his absence. But Hischier had an impressive sophomore season with 45 points in 64 games, and also on the defensive end in comparison to his teammates.

Jack Campbell: Last June, Campbell accompanied Jonathan Quick to the NHL Awards. This season, he outplayed him in his 27 appearances, with a .925 save percentage and an 11.34 goals saved above average. What a world when Campbell has as many shutouts as Quick (two) in about half as many games.

Andreas Athanasiou. He's pushing 30 goals and 50 points overall in an absolute breakout season for the speedy forward, one of a few strong campaigns for young Red Wings forwards in 2018-19.