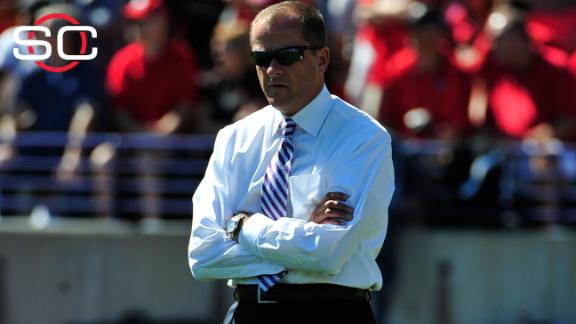 One-and-done play is symptomatic of the problems that plague college athletics, Phillips said at the Big Ten spring meetings, in that it does not benefit the student-athlete at large.

Phillips said NBA executives "look at us as the minor leagues."

"Nobody feels great about kids going to school for a semester and then leaving," he said. "That's crazy. It's absurd. So we've got to fix it.

"Why have we accepted that? Why have we just allowed that to happen without any pushback?"

Emmert and Calipari spoke against one-and-done play last year at the Final Four.

The rule that led to the trend was put in place in 2005 as part of a minimum-age requirement in the NBA's collective bargaining agreement. The CBA expires in 2021, though the league or the union may opt out in 2017 -- possibly presenting a chance to renegotiate the age requirement in two years.

In addition to his comments on basketball, Phillips said Tuesday that the structure of college athletics needs a full review and an overhaul in areas.

"We've gotten to the point where it is time for a timeout," Phillips said, "and everything should be on the table. Nothing's sacred. Let's do the right thing for our student-athletes."

Phillips was elected this year to lead the council, which is tasked to run the day-to-day business of the NCAA's largest classification of 345 schools.

The discussion among Big Ten administrators on a "year of readiness," after the release in April of commissioner Jim Delany's 12-page white paper, has evolved to include various issues.

"If you're not for a year of readiness and you don't think we should just blanket -- make freshmen ineligible -- then let's have a national discussion about what would be right," Phillips said.

While the white paper was not met with great acceptance outside of the Big Ten, Phillips said it has served an important purpose in generating conversation.

He said he hopes for legislative change to occur, as a result, in January 2016 at the next NCAA convention.

"What do we want the experience to be?" Phillips said. "Personally speaking, I don't want to be the minor leagues. I cringe that we're considered and that people look at us that way.

"We've allowed it to get to this position. So now, we are at a very important point for us to make some hard but decisive decisions about what the future of college athletics is going to be."