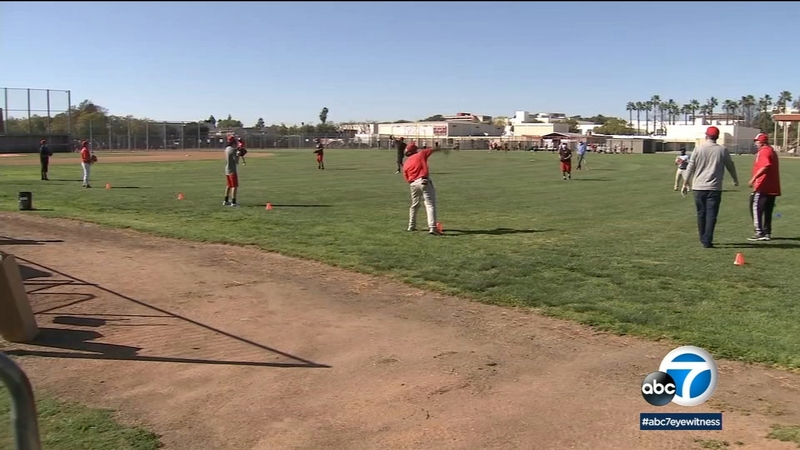 Following state guidelines, organized football, soccer, baseball, cheerleading and other outdoor sporting teams for youth and adults are only allowed to face-off outdoors.

Resuming football, rugby and water polo will also require weekly COVID testing of players -- aged 13 and above -- and coaches, with test results made available within 24 hours of a competition. Gov. Gavin Newsom said the state would absorb the cost of the required testing.

The head coach for the Santa Ana High School Saints said just more than a dozen players were waiting on medical clearance, which includes going over their history of COVID-19, if any.

The team's second baseman, Alex Lopez, said he was happy to be back, but was still adjusting to the changes.

"Usually, when you get here, you know, you greet all the guys and we interact a lot, but now there's a lot of restrictions. You know, you got to be six feet apart and it just takes a lot getting used to it because it's different. It's a big change," Lopez said.

Before they were allowed back on the field, competition was mostly limited to no-contact sports such as cross country. Other athletes were conditioning.

The Saints' football team, meanwhile, has its first game scheduled.

"We're in helmets and we have a game scheduled March 12th. We'll be in full gear on Monday, and you know, we're just excited. I mean, you haven't seen so many big kids cry before," the team's head coach, Charlie Tegantvoort, said.

"We have something to look forward to and to work towards, so it's exciting," Saints quarterback Angel Vega said.

The high school's athletic director, Brian Lillie, says his priority is student safety since teams haven't had the chance to train as much this season.

"We want to make sure the kids are ready to play. Injuries (and) safety is a big issue, especially for football being such a physical sport," Lillie said. "Beyond that, just getting the facilities in place, getting everybody back on the field and sharing the fields is huge. We've got so many sports going at the same time now. That's a big challenge, just the facilities scheduled."

Most students agreed that something is better than nothing.

"It's sad. It makes me a little sad that I got basically, my entire senior year taken away from me, but I'm just happy to be out here, you know? Like I said, it's a lot better than nothing," Lopez said.