Ohio State breaks own record for attendance in spring game 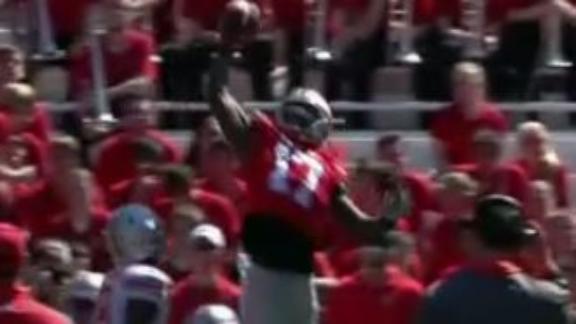 COLUMBUS, Ohio -- Urban Meyer got his wish, and Ohio Statefans broke their own record giving it to him.

On a gorgeous afternoon, 100,189 people packed into the Horseshoe on Saturday to watch the Buckeyes scrimmage to close their month of practices and establish a national record for spring game attendance and extend the mark they set a year ago.

"Oh, man, that was crazy," quarterbackJ.T. Barrettsaid after the game. "I appreciate our fan base. It's crazy that many people would come to watch a practice -- a very basic practice at that. It just shows the love that we get fromour fans, the best fans in the land, and I know, as an Ohio State football player, we definitely appreciate that."

Meyer had appealed all week for Ohio State supporters to come out and provide a game-like environment for his roster full of young, inexperienced players after the team lost nine guys to the NFL draft and one of the most decorated senior classes in school history. The school announced hours before kickoff that it had sold out its allotment of tickets, which created a rare secondary market for spring game tickets on the streets around Ohio Stadium.

"The value this year is probably greater than any of our [previous] four years here to see how they respond," Meyer said earlier in the week. "One thing we're going to have is we're supposed to have great weather, and I hope that we get 100,000 people. That's an appeal to our fans to come on out and, this year even more than last year, to see how people perform in this stadium.

"There's nothing like performing in front of 100,000 people and the opportunity for me to watch that."

Meyer got exactly what he asked for from Buckeyes fans, and the program became the first in the country to hit a six-figure attendance total in a spring game -- topping the 99,391 from a year ago.

The coach let his 400,000-plus followers on Twitter know that he was excited about the achievement later Saturday.