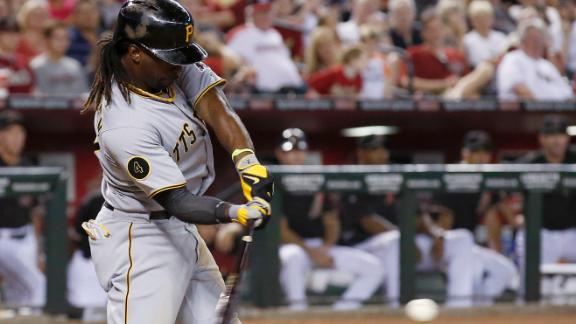 Goldschmidt, runner-up in National League MVP voting last season, was hurt when he was hit by a pitch from Ernesto Frieri in the ninth inning of Friday night's loss to the Pirates. The Diamondbacks placed Goldschmidt on the 15-day disabled list.

Pirates outfielder and reigning NL MVP Andrew McCutchen was hit by a Randall Delgado pitch squarely in the lower middle of his back in the ninth inning Saturday night with his team up by four runs and runners on second and third.

"We understand that retaliation is going to happen in this game. But you know, there's a right way to do it," McCutchen added. "If you're going to hit me, hit me. He hit me square in the spine. If I get hurt, what happens then?"

While Diamondbacks catcher Miguel Montero called the situation Friday "a little shady," Goldschmidt said after the game he didn't think he was hit purposely.

"Guys have to try and get outs," he said. " What do you want them to do? Just throw it down the middle? They pitch inside as a team. We do it too. We want our pitchers to be able to pitch inside. You don't want to see anyone get hurt but sometimes it may or may not happen."