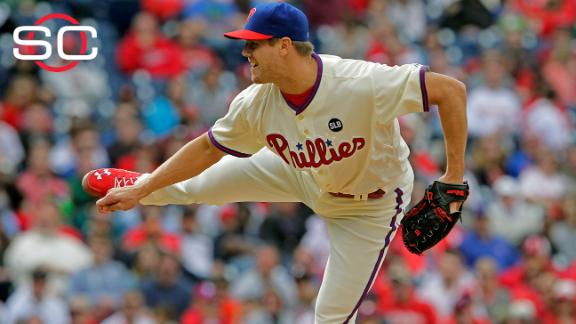 The Philadelphia Phillies have stepped up their efforts to trade away closer Jonathan Papelbon in recent days, multiple sources told ESPN.com. But there are no indications the team is close to any deal involving the 34-year-old right-hander.

Over the past week, according to industry sources, the Phillies have called a number of contenders with potential need for a closer and told them the club would be willing to eat a portion of Papelbon's $13 million salary for this year, along with a portion of his $13 million vesting option for next season, if it brought them a better return in players.

Papelbon has about $8 million remaining in salary for this season. If he finishes 26 more games before the end of the year, which appears likely, he would guarantee his $13 million option for 2016. His contract also gives him the right to block a trade to 17 teams. And he would likely ask for a guarantee of his option year in order to waive his trade-veto rights.

Clubs that have spoken with the Phillies in the past say that until this month, they'd shown little interest in absorbing Papelbon's salary to facilitate a trade. However, sources familiar with the Phillies' thinking say they have softened that stance if it brings them better players back in any trade.

A source confirmed reports by CSNPhilly.com and FoxSports.com that the Phillies and Toronto Blue Jays have spoken about Papelbon this month. However, the Blue Jays have limited financial flexibility and undoubtedly would need the Phillies to absorb a significant amount of Papelbon's contract. And beyond them, the list of other potential contenders that could shop for a closer is short.

The Chicago Cubs, Seattle Mariners, Tampa Bay Rays and Miami Marlins are among the teams that have closer questions. But the Cubs recently signed closer Rafael Soriano to a minor league deal. And the Mariners, Rays and Marlins aren't known to be aggressively hunting for closer help at the moment.

The Phillies' market for Papelbon is also limited because he has said in the past he wouldn't accept a trade to a team that wanted to use him as a setup man for its current closer. And some teams have expressed concern about his clubhouse presence, although the Phillies have been working hard behind the scenes this year to remake Papelbon's image as a maturing leader in an otherwise-young Phillies bullpen.

In addition to Papelbon, Oakland's Tyler Clippard and Cincinnati's Aroldis Chapman could become available between now and the July 31 trading deadline. And other teams believe that's one more reason the Phillies appear motivated to move Papelbon sooner than later.