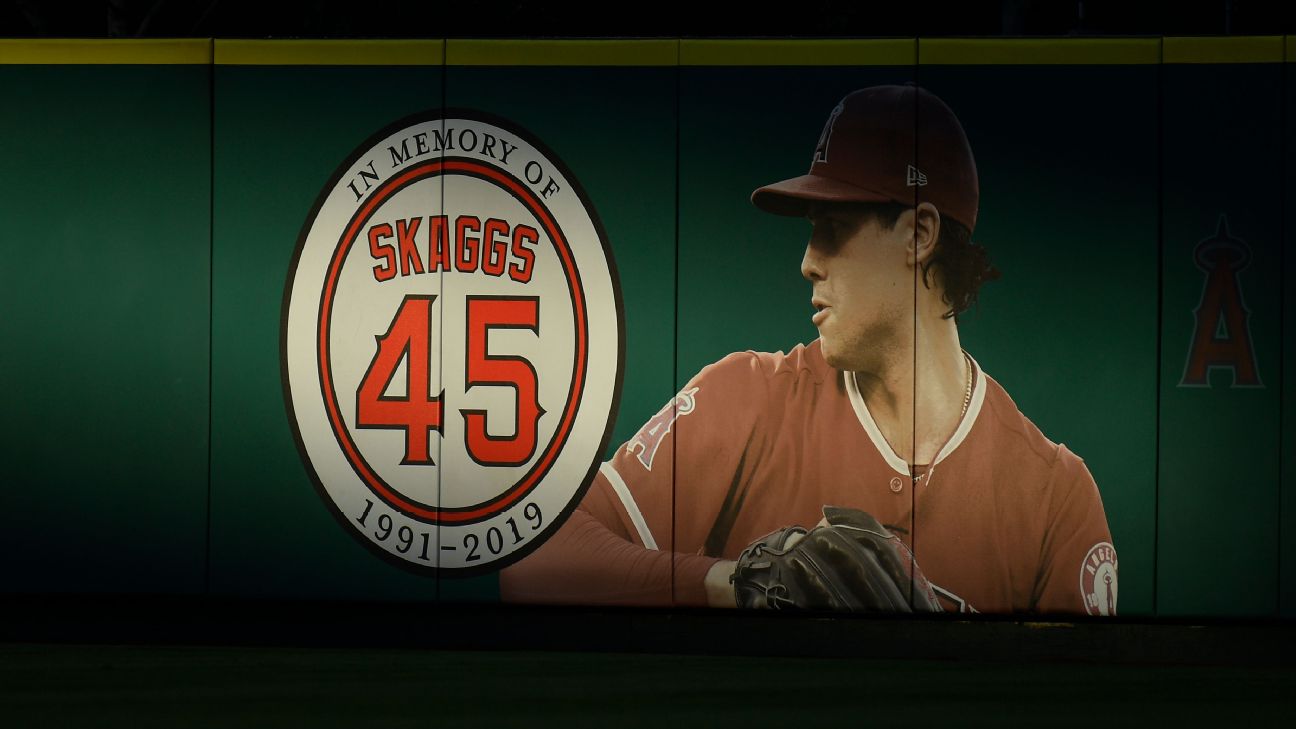 Skaggs' widow, Carli, filed in Fort Worth, Texas, in the same county where Skaggs died, and Skaggs' parents, Darrell Skaggs and Debbie Hetman, filed in Los Angeles. Both lawsuits were filed in state courts and do not specify how much money they are seeking. Under the states' laws, the deadline to file the lawsuits is Thursday, the second anniversary of Skaggs' death.


In addition to the Angels as an organization, the family is suing former team communications director Eric Kay, who told authorities that he regularly purchased drugs for Skaggs, and Kay's former boss, Tim Mead. The crux of the lawsuit is that the Angels were negligent in allowing Kay, a longtime opioid abuser, to have access to players and that Mead failed to properly supervise him.

The Angels released a statement, saying the lawsuits "are entirely without merit and the allegations are baseless and irresponsible," and that they would "vigorously defend" in court.

"In 2019, Angels Baseball hired a former federal prosecutor to conduct an independent investigation to comprehensively understand the circumstances that led to Tyler's tragic death," the statement read. "The investigation confirmed that the Organization did not know that Tyler was using opioids, nor was anyone in management aware or informed of any employee providing opioids to any player."

As ESPN reported in 2019, Kay told U.S. Drug Enforcement Administration agents that he also had provided oxycodone for five other players at Skaggs' request. No other players have been publicly identified. The lawsuit claims that the Angels had a culture that pushed players to play through injury and that the club knew or should have known about Skaggs' use of opioids.

Skaggs, 27, was discovered dead in his Southlake, Texas, hotel room July 1, 2019, after he had asphyxiated on his own vomit. A toxicology report showed that Skaggs had oxycodone, fentanyl and grain alcohol in his system. Kay, who left the Angels in late 2019, is facing federal charges for distributing fentanyl, and is scheduled for an August trial in U.S. District Court in the Northern District of Texas. He has pleaded not guilty.

"As you might expect, the decision to file these complaints has been a very difficult one for Tyler's parents and his wife," Rusty Hardin, the Skaggs family's attorney, said in a statement. "Nothing will ease the pain and heartache of losing their only child and, for Carli, her husband and soulmate. But they want to get to the bottom of the circumstances surrounding Tyler's tragic, untimely and completely avoidable death, and to hold the individuals and entities -- including the Angels -- accountable for the actions that contributed to it.

When the U.S. Attorney's office announced Kay's indictment last August, its statement said, "It was later determined that but for the fentanyl in [Skaggs'] system, he would not have died." Skaggs' autopsy showed that he died by asphyxiation, however, not an overdose. When asked who had made that determination about the fentanyl and when, the U.S. Attorney's office said it could not comment. A source at the Tarrant County Medical Examiner's office told ESPN, "it wasn't us." The source said he was unaware of any other autopsy done on Skaggs before his body was cremated.

The Skaggs family's lawsuits cite ESPN's 2019 interview with Kay's mother, Sandy, who said that she discussed Skaggs' drug use with Mead just months before Skaggs died, while Eric Kay was hospitalized for an overdose. Sandy Kay told ESPN that while she, Mead and Kay's wife, Camela, were visiting him in the hospital, Kay received a text from Skaggs seeking drugs. Sandy Kay told ESPN she saw the texts to her son and told Mead that the team needed to intervene and get Skaggs "off his back." The existence of that April 22, 2019, text could prove crucial to corroborating what Sandy Kay told ESPN.

According to two sources familiar with the investigation, Eric Kay told agents that he first mentioned Skaggs' drug use to Mead in 2017.

Mead, who spent 22 years as the Angels' communications director, denied ever hearing that Skaggs was using drugs. "I have had a lot of conversations with Eric Kay about a lot of things, but opioids and Tyler Skaggs were not one of them," Mead told ESPN in 2019.

Mead left the Angels in late April 2019, just a month before Skaggs' death, to become president of the National Baseball Hall of Fame and Museum. He resigned from the Hall of Fametwo months ago.


Mead's attorney issued a statement saying, "Before Tyler Skaggs' tragic death, Tim Mead was not aware, informed, or had any knowledge whatsoever that Tyler may have used opioids, or that Eric Kay or any Angels employee had ever provided opioids to any player. Any statement to the contrary is reckless and false."

Kay's attorney, Michael Molfetta, told ESPN: "I am, as always, respectful of the pain the Skaggs family is going through. The scourge of addiction has devastated many families. I also know that there are precious few people with access to all the elements of the case, and I'm one of them. Factually, in terms of the nuts and bolts of their claim, good luck. There is also a principle called comparative and contributory negligence, and all I will say is that it if you live in a glass house I wouldn't throw a stone."

Kay told investigators that he and Skaggs had worked out an arrangement in which Kay would obtain drugs for Skaggs and himself and Skaggs would pay for them. He told investigators that Skaggs had introduced him to a California man who provided the drugs and that he and Skaggs regularly snorted opioids together. ESPN reviewed Venmo transactions alleged to have occurred between Skaggs and Kay that showed a series of payments over two years ranging from $150 to $600.

As ESPN reported in 2019, Kay told DEA agents that a few days before Skaggs' fatal road trip, he illegally obtained six oxycodone pills and gave three to the player, according to two sources familiar with his sworn statement. But Kay told DEA agents he did not believe the pills he obtained for Skaggs were the same ones the pitcher took the day he died. Skaggs also texted Kay the day the team left for Texas seeking more oxycodone, a request Kay told investigators he was unable to fulfill, the sources said.

Kay told DEA investigators that hours before Skaggs' death in July, Skaggs was in his Southlake Hilton hotel room and texted Kay to visit him, according to the sources familiar with the investigation. Kay also told agents that Skaggs snorted three lines of crushed opioids in front of him, the sources said. Kay told agents he did not take any drugs despite being offered them by Skaggs, the sources said, because he was on a medication that would have negated the effects. A source who saw Kay around 3 a.m. on July 1 said that players had been in and out of his room for much of the night and that Skaggs had ordered "Jazzy wings" from room service.