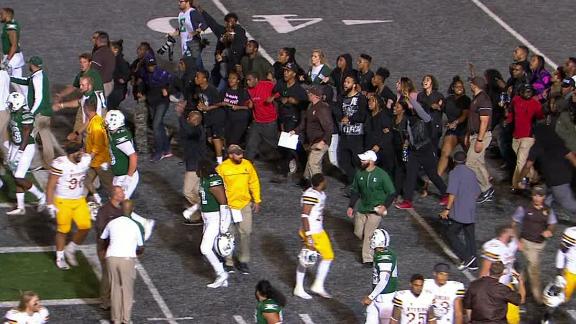 YPSILANTI, Mich. -- Eastern Michigan University strongly supports the right of students to peacefully demonstrate about issues that are important to them, the school's president said Saturday, a day after students took to the field after a football game to protest racist graffiti that showed up on campus earlier in the week.

The student protest on the Rynearson Stadium field after Eastern Michigan's 27-24 victory over Wyoming on Friday night was peaceful. During the game, students sat peacefully and talked to president James Smith. They moved outside the end zone area in the closing moments before walking onto the field chanting, "No justice! No peace!''

"We have great respect for our students engaged in the constructive efforts underway to address the issues we face,'' Smith said in a statement released Saturday.

Spray-painted graffiti that included the letters "KKK'' and a racial epithet was found Tuesday on the exterior wall of a building on the Ypsilanti campus. Another racial slur was found Wednesday.

A group of students protesting the graffiti were marching Tuesday from the campus to Smith's home when a motorist slowly drove through the crowd in an SUV, damaging a motorcycle. No injuries were reported and sheriff's deputies are investigating the incident.

Nationally, protests have followed the fatal shootings of blacks by law enforcement.

A fifth day of rallies was held Saturday in Charlotte, North Carolina, after the fatal shooting earlier in the week of a black man by police. Some of the demonstrations were violent and North Carolina's National Guard was called in Thursday to maintain order.

"We're still trying to bring awareness because we feel like they are not doing anything about what happened,'' Muray said of school officials' handling of the graffiti issue. This is the perfect opportunity to do that.''