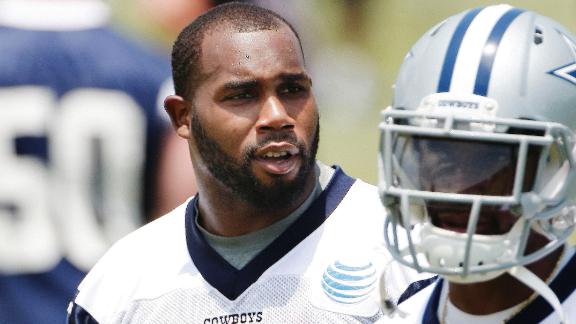 The Dallas Cowboys still haven't announced their starting running back, but Joseph Randle is expected to get the nod against the New York Giants on Sunday night, sources told ESPN NFL Insider Adam Schefter.

Coach Jason Garrett has been coy about naming his starting running back, and the Cowboys have remained insistent that they will split carries among the three backs vying for playing time.

Randle, who has been competing with Darren McFadden for the lead role, got the majority of the first-team snaps when both players were healthy during the preseason. Lance Dunbar also is expected to get some work this season in the Cowboys' backfield.

The Cowboys were a one-man running game last season with DeMarco Murray. He carried 392 times for 1,845 yards, setting team marks in both categories.

Randle, who averaged 6.7 yards on 54 carries last year, has 105 rushing attempts in two seasons. McFadden has had more than 215 carries in a season just twice in his seven seasons with the Oakland Raiders. Dunbar has 80 carries in three seasons.

Hasselbeck: Cowboys want Randle to take the starting job and run with it
The Fantasy Football Kickoff crew offers its predictions for how the Dallas Cowboys' RB situation will play out now that they have added RB Christine Michael to the depth chart.