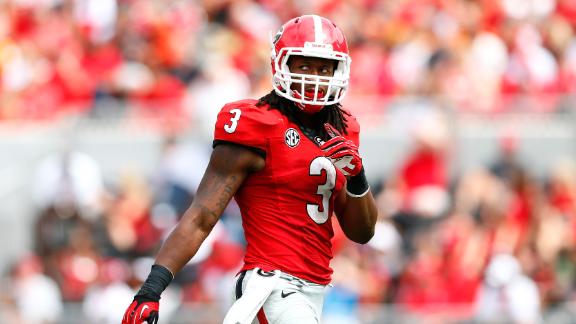 Ed Garland, who has represented former Baltimore Ravens linebacker Ray Lewis, former NHL all-star Dany Heatley and rapper T.I. in high-profile criminal cases, told ESPN.com on Friday that he has been retained by Bryan Allen, a sports memorabilia dealer whose relationship with Gurley is being investigated by UGA officials.

"I do represent Bryan Allen," Garland said. "He's not going to be making any statements. Really, I have nothing else to say."

On Thursday, University of Georgia officials suspended Gurley indefinitelywhile the school investigates whether or not he was paid to sign large quantities of jerseys, helmets, footballs and other memorabilia that is currently being sold on eBay and by other retail outlets.

Gurley, a leading Heisman Trophy candidate, didn't travel with the No. 13 Bulldogs on Friday as they flew to Columbia, Missouri, for Saturday's game against the No. 23 Tigers.

Georgia AD Greg McGarity issued a statement on the situation Friday, in which he said the university has helped Gurley retain legal counsel as well, which is permitted under NCAA rules.

"While the University does not tolerate any violation of NCAA rules, the University has supported and continues to support its student-athletes," McGarity said. "We have made clear to Todd that regardless of what happens with this case, he is still a member of the Bulldog family, and we will support him in every way we can. ... Rest assured the University is continuing its efforts to resolve the eligibility matter as expeditiously as possible and in a manner that is in the best interests of the University, its coaches, and its student-athletes."

The Atlanta Journal-Constitution reported Friday that the investigation may end Gurley's junior season. After running for 773 yards with eight touchdowns in the Bulldogs' first five games, Gurley is expected to skip his senior season at Georgia and enter next spring's NFL draft.

Under NCAA rules, Gurley would face a potential one-game suspension (10 percent of the team's competition) if he accepted improper benefits ranging from $100 to $400. The penalty would increase to two games (20 percent) for amounts from $400 to $700, and to four games (30 percent) for amounts greater than $700.

On Sept. 30, Allen, whose last known address was in Villa Rica, Georgia, sent an email to ESPN and several other media outlets, in which he claimed to possess "video of Todd Gurley doing a private autograph signing from last [March]."

Allen included his name in the email and a cellphone number that was recently issued to him.

"He has been paid thousands of dollars for his stuff over the last 18 months," Allen wrote in the email. "I personally paid him for the signing on the video. I have bought and sold game used equipment from him."

In the email, Allen claimed he didn't want to be compensated for releasing the video or photos of Gurley signing memorabilia. A photo Allen attached to the Sept. 30 email shows an African-American male, who closely resembles Gurley, signing a mini-UGA helmet inside a car. The man is shown autographing the helmet with his left hand; Gurley is left-handed.

Allen wrote in the email that he recently sold the mini-helmet on his eBay store and that the video didn't "show the money exchange."

"All I ask for is privacy," Allen wrote. "I live [in] Georgia and would be crucified if my name was released."

Attempts to reach Allen on Friday were unsuccessful. A woman who answered the phone at one of his last known addresses said he no longer lived there, but would get a message to him. A couple of hours later, a man who called an ESPN.com reporter's phone from a blocked telephone number advised the reporter to contact Garland.

A source familiar with the investigation confirmed that Allen once owned a sports memorabilia store near Rome, Georgia. The store closed within the past year.

Todd Gurley May Not Be Cleared This Season
Brett McMurphy and Paul Finebaum explain why Georgia RB Todd Gurley might not return to the field this season.

Latest On Todd Gurley
Chris Low discusses the latest news on Georgia RB Todd Gurley, who was suspended indefinitely; Low also explains whether he would vote for Gurley for the Heisman Trophy.