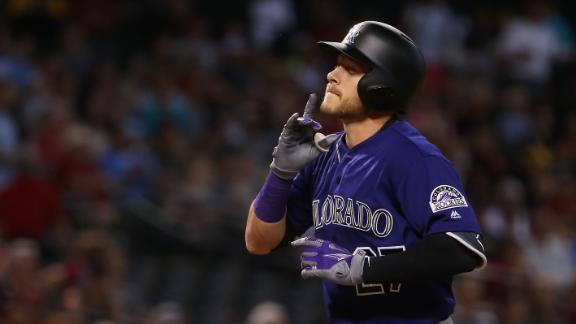 Story is the first player since 1900 to open his career with home runs in his first three games, according to the Elias Sports Bureau.

While Story is the first rookie to begin his career with homers in his first three games, he's not the only player with that streak alive this season.Seattle Mariners second baseman Robinson Cano hit his third home run in as many games on Wednesday as well in a 9-5 victory over Texas.

The overall record for most home runs to start a season is four, a mark shared by four players.

Story continued his streak with a 2-run shot in the first inning of Wednesday's 4-3 win over the Arizona Diamondbacks to give him four on the year. His four long balls in the first three games is also the most for a rookie player since 1900, according to Elias.

On Monday, the 23-year-old became the first player to hit two home runs while debuting in the major leagues on Opening Day. He then added a home run in Tuesday's win over the D-backs.

With his home run on Wednesday Story surpassed Joe Cunningham, who also hit three home runs in his first two career games when he debuted for the St. Louis Cardinals in 1954.

Todd Helton was the only other Rockies player to homer in his first two career games, in 1997.