Roll Tide what? The 2019 college football quotes of the year 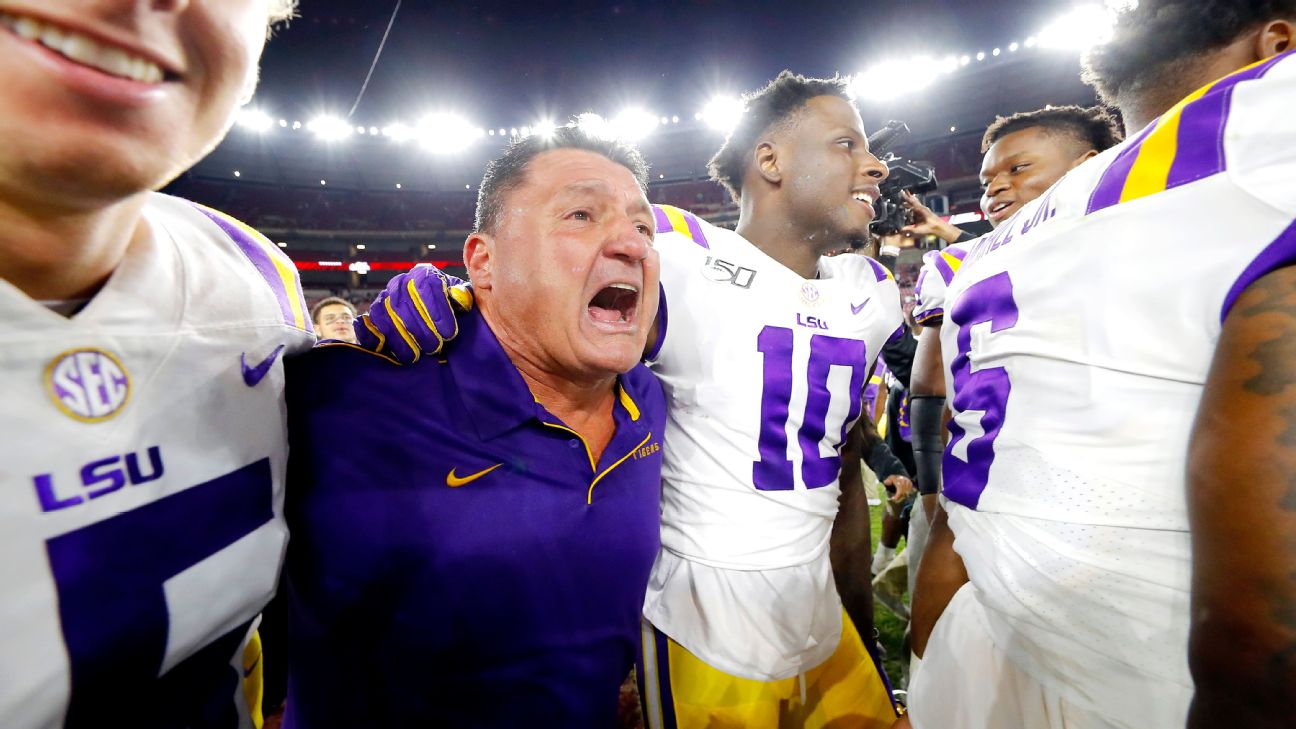 There's a lot of ground to cover in a single year in college football. There's bowl season, the College Football Playoff, then that long, sad time when there's no football. Then those hot summer practice report days give way to talking season, then the fall comes and the rivalries start and the jabs start flying. That's our time.

Anyway, a lot of people said stuff, and it's our job to remember which of that stuff was good.

As always, you can find you some Dabo Swinney folksiness. Some Nick Saban testiness. Some Mike Gundy peculiarness. Hard not to overdo it with the Mike Leach whateverness. But it's a sad time too, because despite the #blessed return of Les Miles, it's the time of year when we most miss the everyday Steve Spurrier Spurrierness.

Here are your 2019 college football quotes of the year.

-- Minnesota coach P.J. Fleck on Casey O'Brien, a four-time cancer survivor whose dream was to get into a game as holder for the Gophers before accomplishing it on Oct. 20

"It was just as loud as Rocky Top. ... I know the Swamp was maybe a little louder."

-- On the San Antonio Commanders crowd in the Alamodome when he was coaching the Orlando Apollos in the Alliance of American Football (which later ran out of money, and the season ended prematurely with Spurrier having the best record in the league and saying, "We're the champs, right?")

And the Florida athletics ambassador also would like to remind you he won Duke's last ACC title.

"We got our 1994 team coming back for our reunion. This is 25 years. That's the way we do them here, I guess. Our boys at Duke, we won the 1989 ACC championship. We celebrate that one every five years."

-- On the 25th anniversary celebration for Florida's 1994 Southeastern Conference champions

-- UCLA coach Chip Kelly, on whether his team was aware it controlled its own destiny in the Pac-12 South race

Maybe just a real dragon, then?

"Children getting spit on and paralyzed and eaten, potentially, by the Komodo dragon. I thought it seemed like a great idea, but apparently it's not as good of an idea as I once thought."

-- UAB athletic director Mark Ingram on the drawbacks to having a live Komodo dragon mascot, as explained to him by someone from the Birmingham Zoo

"I don't know what I'm supposed to say."

-- A first from Clemson coach Dabo Swinney at ACC media days, after being asked about Alabama linebacker Dylan Moses' comments that Clemson wasn't the best team the Tide played last season (when Clemson beat them 44-16 in the College Football Playoff National Championship in January)

"I am kinda like Osama bin Dabo. I have to navigate my way through the caves and back channels to make my way through Alabama these days. They aren't as happy to see me."

"Man stop this we only got 2 uniforms"

"Recruits, if you speed your film up I can tell. Too many refs running 4.3 on tape."

"Every season, everyone thinks we are going to get our head kicked in, and then we don't and everyone gets to be stunned and surprised. So it's fun for everybody."

"He was fat, but his voice was still good."

"I ain't seen nobody win the Kentucky Derby with a donkey."

"We were joking, quite frankly, about my first experience riding into the Cotton Bowl Stadium on the bus and the warm welcome you receive in the Red River game [against Oklahoma]. ... When it occurred, I honestly had no idea. I wasn't aware that the camera in the room was on live television."

-- Texas coach Tom Herman, who just got in under the wire after having the No. 1 quote on our 2018 list, apologizing for giving the Longhorn Network camera the double-bird treatment during live signing day coverage -- which leads us to another controversial gesture ...

"Nothing goes better together in Oklahoma than tornadoes, pork rinds and Horns Down."

-- OU fan John Slate, who flashed the Horns Down sign on live TV during an Oklahoma City news report, in a story on the rise of the anti-Texas taunt

OK, but what about the glasses?

"Yeah, you know what? I'm getting old. It's been a s---ty fall. I got more gray hair than I've ever had. My wife doesn't like hanging around losers. I've been losing, so, I mean, it ain't been good."

-- South Carolina coach Will Muschamp, when asked if his new glasses would be a new tradition

How not to take a compliment

"It's kind of like going to recess and they have the first 85 picks."

"That's a slap in the face because we're dressing 122 today."

Yeah, we'll just let Mike Leach roll on this one

Is it too late now to say sorry?

"Bieber shirt has been ripped in half and thrown away. No more nonsense."

-- Arkansas quarterback Nick Starkel, who wore a Justin Bieber shirt in pregame warm-ups, on Twitter after throwing five interceptions in a 31-24 loss to San Jose State

Checking in on Oklahoma quarterbacks

"They've got good players. The last couple of years they've had average quarterback play and they've overcome it."

-- Oklahoma State coach Mike Gundy, at Big 12 media days, on why Oklahoma has been tough to beat (with Baker Mayfield and Kyler Murray)

"We've had some pretty funny conversations. I'm not going there. You guys would really ... It would be a hell of a story. Maybe I'll put that in my book."

An introduction to Joey Heisman

Joe Burrow, after a 45-38 win in Austin over then-No. 9 Texas, looked like a straight-up 1980s movie jock/villain as he waved goodbye to Texas fans, then dropped this little zinger and nailed the smirk/water swig combo.

"When it's nut-cuttin' time, he's gonna cut some nuts."

Welcome back to the SEC, Lane Kiffin

-- An Ole Miss fan greeting new coach Lane Kiffin at the airport (while handing him his baby to hold), perhaps nodding to the escort service calls that forced former coach Hugh Freeze to resign

"Lot better than another tarmac experience that I had."

-- Kiffin, during his introductory news conference, on that greeting at Ole Miss as a contrast to his firing on the tarmac at USC

Welcome back to ... college, Joe Burrow

"Obviously, I don't go to class because I only take online classes, so I don't get to see any of those people. I just wanted to see them for the first time and thank them for coming to the games."

Welcome back to ... Earth, Les Miles

"That the Earth is round, generally speaking. There's some areas where it's flat, but mostly round."

Not all transfer stories are glamorous

-- Ohio State quarterback Justin Fields (who transferred from Georgia), who is part of a playoff field that also includes transfers Joe Burrow (Ohio State to LSU) and Jalen Hurts (Alabama to Oklahoma)

"Yeah, but I wasn't worth a crap. Nobody cared. They spelled my name wrong in the bowl game on the back of my jersey."

-- Auburn coach Gus Malzahn, at SEC media days, on whether he relates to transfers because he transferred in college (from Arkansas to Henderson State)

"No, I'm good in Tallahassee."

-- Former Florida State coach Willie Taggart, when asked if, in honor of the 50th anniversary of the moon landing, he'd be interested in going to space

You know what happens to the Titanic, right?

"I think 'Titanic' came out maybe when I was in college. When the boat starts going down, remember all the mice running to the top, right? We have had a few that left our program, but you will figure out who wants to be a Tennessee Vol and who don't."

Everyone, but mainly the ones with the money

"I used to say we are chasing a moving target. Now I'm going to say it this way: We got to pass a moving target, and those are big targets, and it's going to take every single person, everyone. So, yeah, if you got a lot of money, we need your money, make no mistake about it."

-- Fired-up Georgia coach Kirby Smart, on what he told his team on Saturday after beating Auburn to earn a return trip to the SEC championship game

"I would like to apologize for something I said after the game. ... You know you messed up when you get home to your wife and ... you won the game, but she's more upset at something you said."

-- A somber Smart on Monday at his news conference

"You can't plant potatoes one day and expect to eat potato salad the next day."

"I mean, I'll answer your questions. Not your insults."

"I don't know where they stopped exactly -- I didn't get one. But I did see somebody with like a 12-incher or 14-incher."

-- Iowa coach Kirk Ferentz, after team managers got a police escort and brought back 60 sandwiches to the locker room during a two-hour lightning delay

What about a Komodo dragon?

-- Auburn left tackle Prince Tega Wanogho, who is from Delta State, Nigeria, on his fictional giraffe, Bobo, that he created to mock Americans' knowledge of his home country

"If you want to talk s--- to the other team, join the goddamn debate team."

Our quote of the year: Just like dinner with the family

Ed Orgeron was fired up. He'd just ended an eight-game losing streak to Alabama, beating the Crimson Tide 46-41 and ending their 31-game home winning streak. In the locker room, he addressed his time, unaware a player was livestreaming. "We're going to beat their a-- in recruiting," he yelled. "We're going to beat their ass every time they see us. You understand that?" Then he delivered a bomb that told the story of LSU upending the SEC.

Orgeron later apologized, saying he never wanted that to be public. "You get emotional when you talk to your team. It's your family. Just like we all talk to our family. We talk around the dinner table, we say some things that outside of the family we wouldn't say." 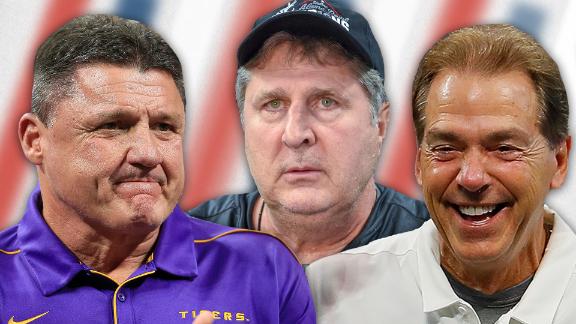