ESPN
PASADENA, Calif. -- Josh Rosen's arm once against captivated the Rose Bowl, but not with his usual passing prowess.

It was a block Rosen threw that stole the show in the Bruins' 42-21 win over UNLV on Saturday. Rosen sprung Soso Jamabo's 23-yard touchdown run in the second quarter, putting his throwing shoulder into 280-pound defensive lineman Salanoa-Alo Wily as the sophomore running back cut back across the field.

"I wanted him to use his left shoulder rather than his right shoulder," UCLA coach Jim Mora said. "I asked him if he could do that next time."

Rosen threw for 267 yards and one touchdown and rushed for one score, Jamabo ran for 90 yards and three touchdowns as the Bruins (1-1) rebounded from a sluggish third quarter to hold off the improving Rebels (1-1).

After posting an emphatic 37-3 win at UNLV last season, Mora was impressed with the improvement coach Tony Sanchez's team had made in less than one year. UCLA needed touchdown runs from Bolu Olorunfunmi and Rosen in the fourth quarter to pull away, with a targeting penalty against safety Kenny Keys extending the UCLA drive that pushed the lead back to 14 points.

"But that was the changing point of the game," Sanchez said. "Third-and-10, we're getting the ball back. All of a sudden you have that, they go down and score. You're chasing it after that."

Fabian Moreau intercepted two of UNLV quarterback Johnny Stanton's passes, taking the first back 52 yards to set up a short touchdown run by Jamabo. Stanton had 153 yards passing for UNLV, which fell to 4-16 all-time against Pac-12 teams. Lexington Thomas added 112 yards rushing and one touchdown.

UNLV: It wasn't a signature win for Sanchez, but this gritty performance showed that he has the program trending up in his second season. UNLV hung with the Pac-12 South preseason favorite, demonstrating the energy and athleticism that had been missing for years. If Stanton can become a more consistent passer, a bowl bid isn't out of the question this season.

UCLA: There is plenty of work to be done before conference play begins against nemesis Stanford on Sept. 24. The run defense allowed 175 yards, and UNLV was able to convert 8 of 15 third downs. Rosen and the offense went ice cold in the third quarter. UCLA has plenty of talent but remains wildly inconsistent.

BACK TO SIN CITY

Sanchez was pleased that UNLV was able to compete with UCLA, but less than thrilled with his team's travel arrangements.

When asked what he took away from the game, Sanchez said, "Other than the 4.5 hour bus ride home?"

Unlike the "paycheck" games that filled the Week 2 schedule where smaller teams receive a guaranteed payout, this game completed a home-and-home series with UCLA.

UNLV: The Rebels are back on the road at Central Michigan with the Chippewas coming off their improbable and controversial 30-27 win at Oklahoma State. UNLV has not won a road nonconference game since 2007.

UCLA: The Bruins wrap up their nonconference schedule at BYU, which represents the end of the early Pac-12 South slate for the Cougars. UCLA's last trip to Provo, Utah in 2008 was a 59-0 thumping, the Bruins' worst loss since 1929. 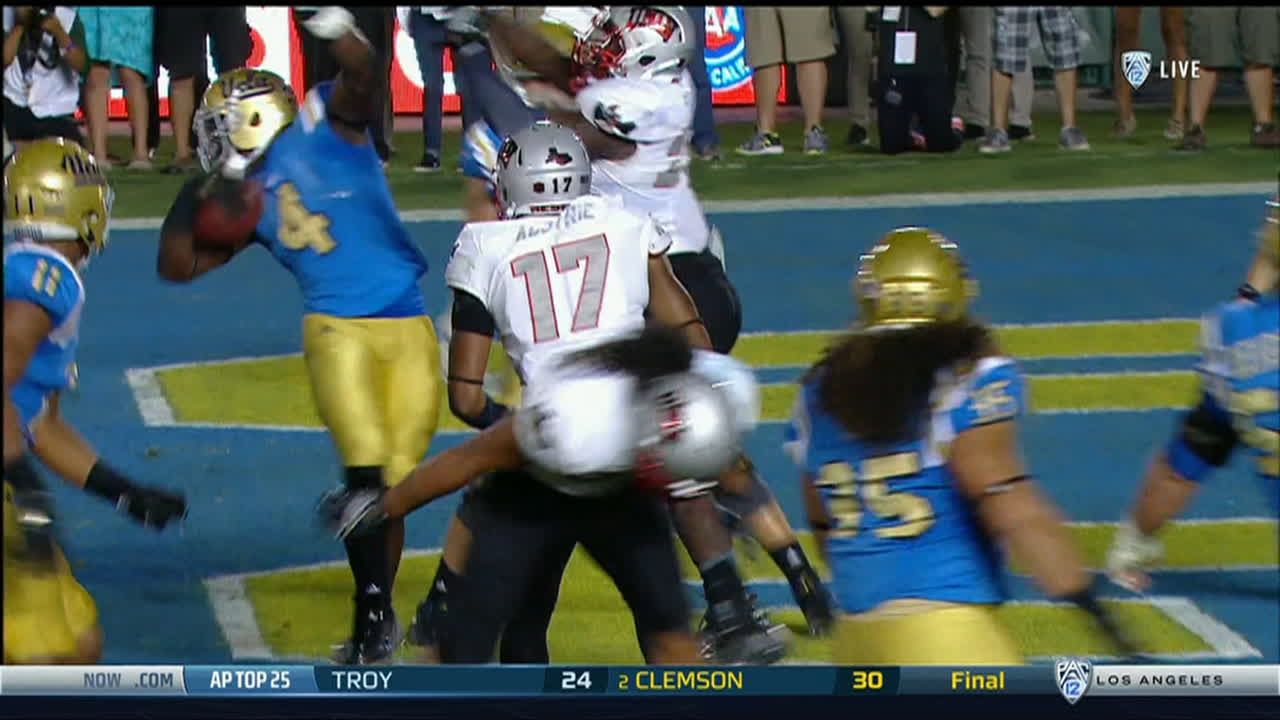