After 30 horse deaths, protesters call for end to racing at Santa Anita 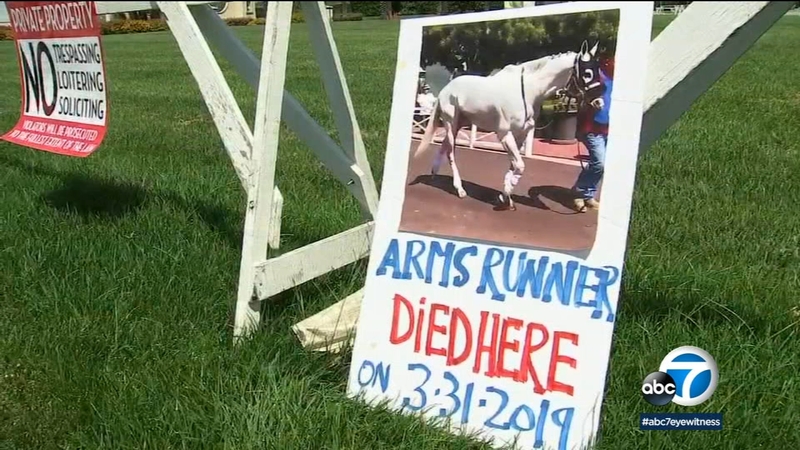 After 30 horse deaths, protesters call for end to racing at Santa Anita

ARCADIA, Calif. (KABC) -- Protesters were back at Santa Anita Park on Sunday, the last day of the racing season, to call for an end to horseracing at the track and throughout California.

This racing season, 30 horses have died following injuries at the park, sparking a state inquiry and calls for improved safety measures.

The most recent death was Saturday morning, when American Currency, a 4-year-old gelding, was injured while exercising and then euthanized.

Animal advocates and some politicians are calling for an end to racing at Santa Anita or even a ban on the sport in California altogether.

"Horse racing deaths are common and if it's common, this industry needs to end its practices," said protester April Montgomery.

This weekend marks the end of scheduled racing for the current season at Santa Anita. The Breeders' Cup is scheduled for the track on Nov. 1.

The California Horse Racing Board says before Saturday's death, the horse's owner, Jerry Hollendorfer, lost three other horses recently at Santa Anita and another two at Golden Gate Fields near San Francisco.

The Stronach Group, which owns both tracks, said it has banned Hollendorfer from all its race tracks.
Report a correction or typo
Related topics:
sportsarcadialos angeles countyanimals in perilhorses
Copyright © 2021 KABC-TV. All Rights Reserved.
TOP STORIES
San Bernardino fire erupts near 215 Fwy, prompting evacuations
Search resumes for Brian Laundrie in Gabby Petito case
Video: Tourist taken to hospital after melee on Hollywood Walk of Fame
Search continues for homeless man who slammed into LA pedestrian
Hollywood Burbank Airport shut down after person runs onto runway
Heat advisories issued for most of SoCal on first day of fall
Movie and film workers might be headed toward a strike
Show More
'No one would be spared': Debt default would set off dire consequences
California struggles to conserve water amid historic drought
Conor McGregor prompts comparisons to worst first pitches in history
Growing scam targets Bank of America and Zelle customers
Woman safe after video of possible abduction in Bell Gardens
More TOP STORIES News