Scott: Kobe to have 'hard cap' on minutes this season 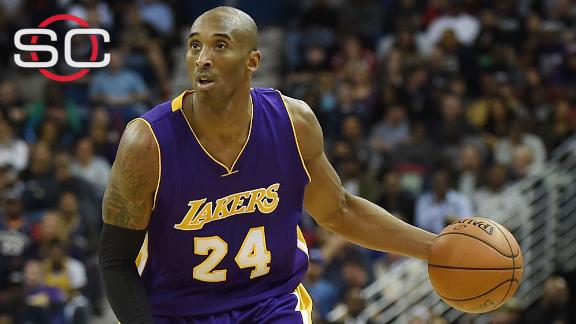 In an effort to help preserve Kobe Bryant in what could his final NBA campaign, Los Angeles Lakers coach Byron Scott said the 37-year-old Bryant will have a hard minutes cap this season, a move that both parties hope will help Bryant avoid injury after having his past three seasons cut short by it.

"We've got to stick to the guns," Scott told the Orange County Register of the cap. "If we agree on a certain amount of time we're going to stick to it."

The move also comes after Scott has blamed himself for Bryant playing too much last season, which led to fatigue and Bryant sitting out several games to rest before suffering a torn rotator cuff in his right shoulder after playing just 35 games.

While it's unclear what Bryant's minutes limit might be this season, it's expected that it will be less than the 34.5 minutes he averaged last season, including playing more than 40 minutes on four occasions. It's also unclear whether Bryant will sit out certain games of back-to-back sets.

"I know Kobe's a competitor and he's going to play as many minutes as you want him to play," Scott told the Register. "I'm also a competitor, so I want to win and I know having him on the court gives me the best opportunity to win."

Bryant was medically cleared Thursday to participate in all basketball activities after spending nearly the past nine months rehabbing his shoulder. He's expected to participate in the team's training camp late this month in Hawaii.

Scott told the Register that Bryant is healthy, and has been working out closer to his Newport Beach home rather than around the Lakers practice facility this summer. The two have been in touch and will also decide if he should play in back-to-backs.

Bryant is entering his 20th season with the Lakers and the final year of his contract with the team, during which he'll be paid a league-high $25 million.