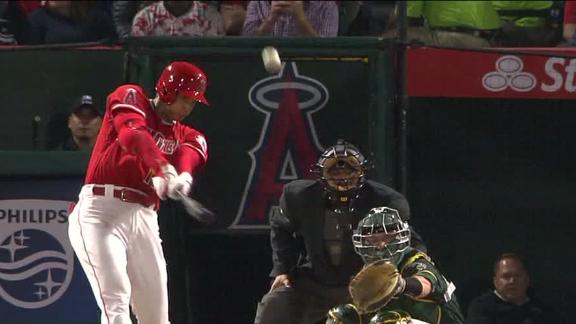 Los Angeles Angels rookieShohei Ohtani hit his third homer of the season Friday night in his first at-bat against the Oakland Athletics.

The two-way star from Japan crushed a 93 mph, two-seam fastball from A'sstarter Daniel Gossettto left-center, a 449-foot solo shot onto the fake rocks up by the camera well.

"Smoked that ball, huh?'' Angels shortstop Andrelton Simmons said. "The center fielder ran after it like he had a chance for a second, scared everybody. Wasn't even close.''

It marked Ohtani's third straight game with a home run as the Angels won 13-9.

"It's very impressive, yeah,'' Athletics manager Bob Melvin said. "You don't see too many guys do that on the mound and at the plate. Any."

Ohtani, who is batting .462 (6-for-13) with six RBIs at home, drew a walk on four pitches with the bases loaded to pull the Angels within 8-7 in the fifth.

The 23-year-old will be on the mound Sunday, getting his first home start against the Athletics. The right-hander beat them in Oakland on Sunday, giving up three runs and three hits in six innings, with one walk and six strikeouts.

Angels manager Mike Scioscia does not plan to use Ohtani as the designated hitter Saturday and have him get a chance to extend his homer streak. But Scioscia said he would be open to letting Ohtani hit before or after a start later this season.

"There has to be point where he becomes a pitcher, not to say sometime during the season he won't be available to do a little bit more the day before he pitches or a day after. But certainly right now we're going to err on the side of caution,'' Scioscia said.