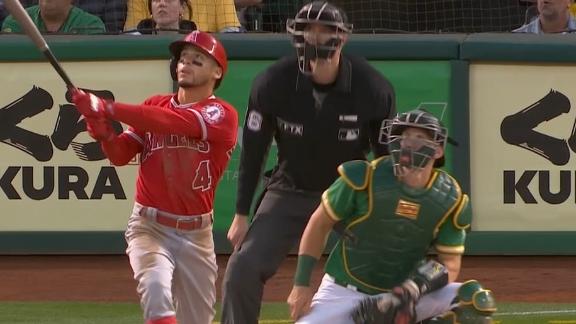 OAKLAND, Calif. -- - Chase Silseth allowed one hit in six strong innings while becoming the first player from last year's draft to make his major league debut, leading the Los Angeles Angels to a 2-0 victory over the Oakland Athletics on Friday night.

An 11th-round draft pick by the Angels last July, Silseth was still pitching in college for Arizona a year ago. He made eight appearances in the minors before getting called up from Double-A Rock City before the game to pitch for the big league club - five days before his 22nd birthday.


"Still speechless, still processing everything," Silseth said. "You totally dream of that phone call or the manager telling you that you're going up to the big leagues to start a game. When I was initially told, I got emotional.

"My uncle died this past fall and the last thing he said to me was, 'You're going to make it.' That was for him tonight."

Silseth (1-0) dazzled the A's with a fastball clocked at 98 mph and a steady sinker and slider that helped produce eight groundouts. The right-hander finished with four strikeouts and two walks during his 81-pitch outing, and allowed only one runner to reach second base.

"Great impression, but that's what he's been doing," Angels manager Joe Maddon said. "I've been hearing about this fella since spring training. That's no fluke. That kid's good. It looks like he's the kind of guy to give opportunity to."

Aaron Loup and Ryan Tepera each retired three batters. Raisel Iglesias pitched the ninth for his eighth save to complete the two-hitter.

Elvis Andrus had the A's only hit off Silseth with a leadoff single in the third, but was erased on a double play trying to advance to third on a fly out to left field. Andrus also singled in the eighth.


"The kid did a great job attacking us," A's manager Mark Kotsay said. "Life on his fastball, split was really good. His tempo was amazing. He had a plan and he was on the mound ready to go. You've got to tip your cap when you have a performance like that."

Oakland has lost seven straight at the Coliseum.

Rendon doubled off Daulton Jefferies in the fourth and scored when Brandon Marsh rolled a two-out single up the middle that just got past a diving Andrus and into center field.

Velazquez homered in the fifth.


A's right fielder Ramón Laureano made a terrific sliding catch on his knees to take a hit away from Chad Wallach leading off the third. Laureano, who returned from the suspended list Monday, made the grab in front of center fielder Cristian Pache, who has made a handful of spectacular catches already this season.

Athletics: LHP Cole Irvin (shoulder tendinitis) threw a bullpen before the game and is slated to pitch for Single-A Stockton on Tuesday.