Somalia-born Mo Farah relieved he can rejoin family in U.S. amid immigration ban 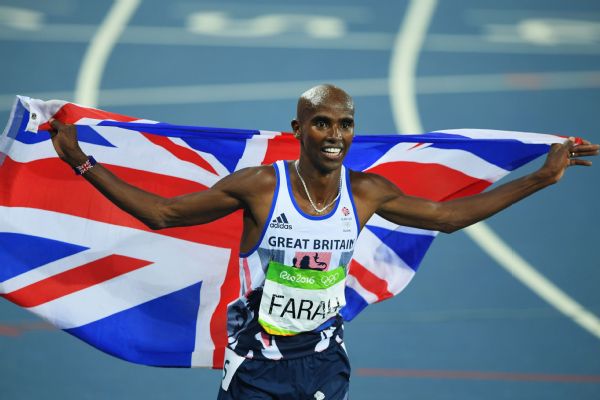 Farah is a British citizen who was born in Somalia, one of seven predominantly Muslim nations subject to the executive order signed by Trump that currently bars entry to the United States.

Farah currently is training in Ethiopia. His wife, Tania, and four children are in Portland, Oregon, where the Farah family has lived for the past six years.

"It's deeply troubling to explain why the President has introduced a policy that comes from a place of ignorance and prejudice." the 33-year-old Farah said in a statement on his Facebook page.

Following conversations between British Foreign Secretary Boris Johnson and the U.S. government, Britain's Foreign Office said later Sunday that Trump's executive order applies only to individuals traveling from one of the seven named countries, regardless of nationality or place of birth. That suggested Farah would be OK to return to the United States.

"Mo is relieved that he will be able to return to his family once his current training camp concludes," said a spokesperson for Farah. "However, as he said in his earlier statement, he still fundamentally disagrees with this incredibly divisive and discriminatory policy."

Farah moved to Britain from Somalia at the age of 8 and is regarded as one of the greatest-ever athletes in British sport after winning the 5,000 and 10,000 meters at both the 2012 and 2016 Olympic Games and at the 2013 and 2015 world championships. He also won the 5,000-meter gold at the 2011 world championships and was recently given a knighthood by Queen Elizabeth II.

"On 1st January this year, Her Majesty The Queen made me a Knight of the Realm. On 27th January, President Donald Trump seems to have made me an alien," Farah said in his statement.

"I am a British citizen who has lived in America for the past six years -- working hard, contributing to society, paying my taxes and bringing up our four children in the place they now call home. Now, me and many others like me are being told that we may not be welcome."

Trump billed his sweeping executive order as a necessary step to stop "radical Islamic terrorists" from coming to the United States. It includes a 90-day ban on travel to the U.S. by citizens of seven majority Muslim countries -- Iraq, Syria, Iran, Sudan, Libya, Somalia and Yemen -- and a 120-day suspension of the U.S. refugee program.

As the executive order faced legal challenges and ignited a wave of protest across the country, international sports officials and athletes alike were plunged into uncertainty over whether the travel ban would affect upcoming competitions -- including Los Angeles' bid for the 2024 Summer Games. Los Angeles Mayor Eric Garcetti criticized the executive order, saying it "unfairly targets" refugees and "There is no evidence that this approach will improve national security" in a statement posted on the city's website.

Calls to the bid committee were not immediately returned.

U.S. Olympic Committee spokesman Patrick Sandusky said in a statement that the USOC is "working closely with the administration to understand the new rules and how we best navigate them as it pertains to visiting athletes and officials. We know the administration is supportive of the Olympic Movement, and our bid, and believe we will have a good working relationship with them to ensure our success in hosting and attending events."

After Iran's Foreign Ministry said in a statement Sunday that it will not allow U.S. citizens to enter the country in retaliation for the travel ban, USA Wrestling spokesperson Gary Abbott told ESPN.com that the American freestyle team is still planning to attend a World Cup competition in Iran in February.

If the United States' entry ban were to be extended beyond 90 days, it could create complications for organizers of the world weightlifting championships scheduled for November in Anaheim, California. Iran, in particular, is a force at the world and Olympic level in the sport.

USA Track and Field spokeswoman Jill Geer said the national governing body "was in touch with the USOC and the IAAF over the weekend, making sure we're doing what we can collectively to ensure athletes can travel as needed."

The next major track and field event in the United States is the annual Millrose Games, a prestigious, 110-year-old indoor meet in New York City. Meet director Ray Flynn said he did not think any athletes planning to compete would be affected by the travel ban, as most are either already in the country or coming from Canada or the Caribbean.

Generally speaking, athletes from countries with restricted or nonexistent diplomatic relations with the United States are able to obtain special visas to participate in major events on U.S. soil, and Andrews pointed out that competitors from North Korea and Cuba were able to participate in the 2015 world championships in Houston.

A small American weightlifting delegation was planning to go to Iran in early March for the Fajr Cup, an invitational event that is part of the International Weightlifting Federation's Grand Prix series.

"We still intend to go,'' Andrews said, provided an exception can be worked out with authorities in both countries. ''We have a positive relationship with the Iranian Weightlifting Federation, and our mindset this weekend is about the power of sport above politics.''

U.S. soccer midfielder Michael Bradley posted his thoughts on the travel ban via Instagram on Sunday morning, saying "the Muslim ban is just the latest example of someone who couldn't be more out of touch with our country and the right way to move forward."

Bradley's post follows a Saturday interview with Sports Illustrated's Grant Wahl in which he said, "As a proud American, I hope we can find the right way to move forward in all this and make sure that we're safe but also not lose so many of the things that make the country so great."

Other athletes with refugee backgrounds reacted to the order with deep emotion.

Distance running icon Meb Keflezighi, a 2004 Olympic marathon silver medalist and winner of the 2009 New York Marathon and 2014 Boston Marathon, told ESPN that he was "shaken up" at the thought of refugees who will remain in limbo because of the order, unable to finish the journey he and his family took 30 years ago.

Keflezighi and his family, who are Christians, fled war-scarred Eritrea via Italy and arrived in the United States in 1987, when Keflezighi was 12. Since then, he said, "God has blessed me more than I ever could have imagined."

The way a country handles refugees "is not an easy subject," Keflezighi said. "It's a test of who we are. This rule [about how refugees are vetted] has been the same for a long time. Why change it?''