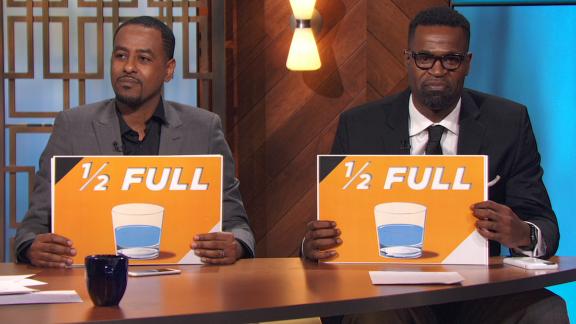 The New York Knicks are giving strong consideration to making Kurt Rambis their full-time head coach, according to league sources.

Sources told ESPN.com that Rambis, who has served as the Knicks' interim coach since Derek Fisher was fired Feb. 8, is the preferred choice of team president Phil Jackson, who sources say is pushing for a new multiyear deal for Rambis despite New York's 8-16 record since the coaching change.

Rambis worked two stints as an assistant coach to Jackson with the Los Angeles Lakers, joining him for four of his 11 championship rings, and has grown very close to Jackson thanks to that longstanding relationship. Sources say Jackson, who took his post with the Knicks in March 2014, has had a much more frequent presence at Knicks practices at home since Rambis took over.

With Jackson, 70, insisting that he can no longer handle the day-to-day rigors of coaching, sources say he sees Rambis as the coach best suited to not only run the triangle offense he favors but also manage the team using Jackson's long-held principles.

Jackson, of course, had similar hopes for Fisher, one of his longtime on-the-court leaders with the Lakers. But New York made the abrupt decision to fire Fisher just a season and a half into his five-year, $25 million deal to coach the Knicks, with Fisher sporting a record of 40-96.

Contributing to the timing of the move were a 1-9 skid after the Knicks' 22-22 start this season and concerns within the organization about a fractured coaching staff and the speed of Fisher's transition from player to coach, ESPN.com reported at the time. According to ESPN.com's Brian Windhorst, only the first four years of Fisher's contract were guaranteed, worth a total of $17 million.

The Knicks, though, have continued to fade since Fisher's ouster. They enter Wednesday's game at 31-47, although that includes an 0-9 record when star forward Carmelo Anthony hasn't played.

It remains to be seen how Anthony would respond to Rambis being elevated to full-time coach. Last month, Anthony said he hoped Jackson, in addition to considering Rambis, would open up the position and consider external candidates, with established names such as Tom Thibodeau, Jeff Van Gundy and Mark Jackson all available and possessing Knicks ties.

Phil Jackson last publicly addressed the Knicks' coaching situation in March during the team's West Coast road trip and said then that Rambis is "perfectly capable" of coaching the club on a full-time basis.

If Rambis lands the permanent job, it would be his second full-time coaching stint in the NBA after a two-season run with the Minnesota Timberwolves in 2009-10 and 2010-11. Rambis posted a 32-132 record in those two seasons with the Wolves following a 24-13 stint as the Lakers' interim coach during the 1998-99 season that was shortened to 50 games because of a lengthy lockout.

The Jump: Half-empty or Half-full
Amin Elhassan and Stephen Jackson play "Half-empty or Half-full," where they are given an NBA organization and they give their thoughts on if the team should be seen as a half-empty glass, or one that is half-full.
Related topics:
sportsespnphil jacksonnew york knickskurt rambisnbacoachderek fisher
Copyright © 2020 ESPN Internet Ventures. All rights reserved.
More Videos
From CNN Newsource affiliates
TOP STORIES