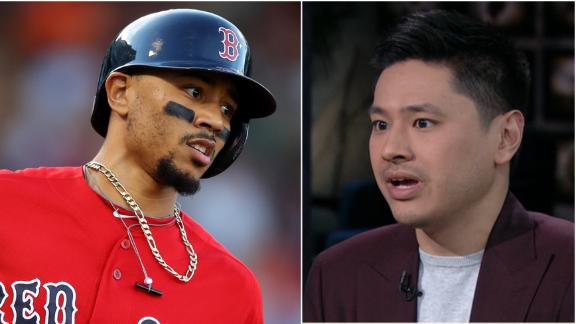 The Boston Red Sox are deep into talks with the Los Angeles Dodgers about All-Star right fielder Mookie Betts, according to sources.

The two sides have talked about possible trade combinations that involve veteran left-hander David Price, and some that don't include Price.

The Red Sox see the benefit of opening spring training without the question of Betts' future hanging over the team, sources said. Betts, 27, will be eligible for free agency after the 2020 season, and the Red Sox have repeatedly broached the idea of signing him to a long-term deal, without success. Rival executives think it's inevitable that the Red Sox will trade Betts before the July 31 deadline.

The Dodgers have a range of young players attractive to Boston, including outfielder Alex Verdugo, pitcher Dustin May and others. L.A. has built one of the deepest farm systems in baseball.

Betts will make $27 million in 2020, after agreeing to a record deal for an arbitration-eligible player. He is a career .301 hitter and has averaged 28 homers and 96 RBIs in his six seasons in Boston.

If the Red Sox include Price in the deal, they'll shed at least some salary -- Boston may have to eat some of the contract to move him -- but receive less in prospect return. The Red Sox have discussed the merits of dealing Betts for prospects, without Price involved, and then open 2020 with the veteran lefty in their rotation, in the hope that he rebuilds some of his value.

The Red Sox had talked with teams about Betts' availability before Christmas, but in the aftermath of the firing of manager Alex Cora, Boston has talked with other teams more seriously. The Red Sox have also had discussions with the Padres, according to sources.