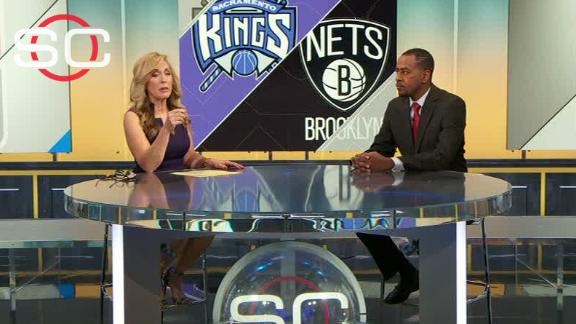 The Sacramento Kings, increasingly concerned about their floundering play under George Karl, entered the weekend hoping to delay any decision about the coach's future until the All-Star break, according to the league sources.

But sources told ESPN that the nature of the team's 128-119 loss Friday night to Brooklyn -- Sacramento's sixth loss in seven games -- and the fallout it generated have the Kings contemplating an immediate coaching change.

The Kings (21-29) have three road games remaining before the break: Sunday in Boston, Monday in Cleveland and Wednesday in Philadelphia.

It was not immediately clear if Karl would survive to coach all three of them or whom the Kings would choose as interim coach if they do make a change, but NBA coaching sources said early Saturday that it is unlikely Kings assistant coach Nancy Lieberman would take over. One possibility, sources said, is elevating assistant coach and former Kings forward Corliss Williamson to interim coach.

During the Kings' local postgame show on Comcast following the loss to the 13-38 Nets, former Kings standout Bobby Jackson -- who played for years with Sacramento general manager Vlade Divac and director of player personnel Peja Stojakovic -- appeared to take the rare step of calling for Karl's dismissal. All-Star center DeMarcus Cousins, meanwhile, voiced a fresh round of frustrations with the Kings' defensive frailties.

"I'd rather keep [problems] in house, but we definitely have a bigger issue than just energy and effort. That can't be the excuse every night. ... We're going to work it out as a team, and hopefully we can fix this."

It was roughly this time a year ago that the Kings struck a deal to hire Karl away from ESPN to replace then-interim coach Tyrone Corbin. When he was reminded during the broadcast that Karl was hired during the All-Star break in 2015, Jackson said: "It can be post-All-Star break that he can leave too. There ain't nothing wrong with it. It's just the business."

A five-game winning streak in mid-January improved Sacramento's record to 20-23 and lifted the Kings into the No. 8 spot in the Western Conference, but the 1-6 nosedive has left them 3 games behind the Utah Jazz for the final playoff spot. Kings owner Vivek Ranadive has made it known that he expected the team to push for a playoff berth this season and bring a halt to a postseason drought dating to 2006.

Karl's job appeared under threat in early November, but he survived those storms. If the 64-year-old is ultimately dismissed now, it would be Sacramento's third coaching change since December 2014. Mike Malone was fired after an 11-13 start last season, and Karl was brought in on a four-year, $15 million deal after Sacramento went 7-21 under Corbin.

Elhassan: 'Coach Karl deserves better'
Amin Elhassan discusses coach George Karl's future with the Kings and says Karl never should have gone to such a poorly run organization as Sacramento.