St. Louis Blues, Nashville Predators and Los Angeles Kings could each pose a challenge for Lightning 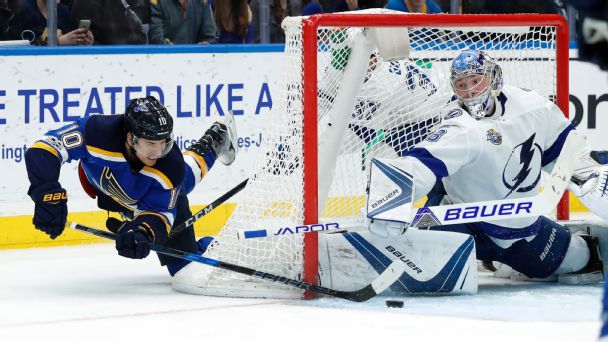 The Tampa Bay Lightning were the NHL's first team to reach 50 points, doing so in just 32 games. Who is their top challenger for the Stanley Cup this season?

Greg Wyshynski:What, a couple of worrisome injuries and we're going to forget about the St. Louis Blues? Yes, I understand that, to be considered a challenger for the Stanley Cup, it does help to have played for one sometime in the past five decades. But hear me out.

The addition and emergence of Brayden Schenn as a top-line center has added a significant dynamic to what was already a deep, talented team. When left wingerJaden Schwartz returns, the Blues can roll that duo and then another line with Vladimir Tarasenko. Or load up a superb line with all three of them when necessary. St. Louis' defensive pairings are anchored byAlex Pietrangeloand Colton Parayko. Goalie Jake Allen passed his postseason test as the Blues advanced to the second round last spring.

They're a top-10 possession team at five-on-five, although their middling special teams -- the No. 25 power play and the No. 18 penalty kill -- do give me pause. Along with, you know, being the St. Louis Blues, a team whose status as a playoff "sure thing" makes the Washington Capitals look like the New England Patriots.

Emily Kaplan: Have you watched a Nashville Predators game lately? This is a team on a scary collision course with a second consecutive Stanley Cup appearance (scary for all other teams, that is). Nashville is a league-best 16-3-2 since Nov. 1. The Predators have lost just two games in regulation over their past 20. Perhaps just as impressive: They've scored two or fewer goals just twice in that span. The Western Canada swing can be tricky for teams; Nashville handled its Vancouver Canucks-Edmonton Oilers-Calgary Flames jaunt like a tour de force, outscoring those teams by a combined score of 13-1.

What's clicking in Nashville? Pretty much everything. But here are a few keys: Filip Forsberg is an early-season revelation. It has typically taken some time for the Swedish winger to get going, but the 23-year-old has 32 points (15 goals, 17 assists) in his first 32 games this season. We've focused so much on Matt Duchene and the Senators' side of November's mega trade (so far: not going great there) but it's been a huge success for Nashville, whereKyle Turrishas settled in astheir new No. 2 center. He, too, has been on a point-per-game pace since arriving in Smashville, with 17 points (three goals, 14 assists) in 17 games. Linemates Kevin Fiala and Craig Smith each have eight goals since teaming up with Turris. And the defense has been solid. While reporting an upcoming piece on the league's most underrated players, I got a telling quote from a Central Division rival regarding Predators defensemanMattias Ekholm: "He's a guy who doesn't get a ton of attention, but I think he's a really big piece of their puzzle. They obviously have some guys who do awesome things, like [Roman] Josi, but Ekholm is a guy who does everything well. There's nothing he does bad."

This is a team that's not only clicking, but red hot. I wouldn't want to play the Preds now, or in June.

Chris Peters: The Lightning sure look like a juggernaut, and their ability to run teams out of the building offensively would scare just about any team. Except for a couple, maybe. The Predators would be one, but I think the Los Angeles Kings are another. While the Lightning are filling nets with impunity, the Kings have been among the NHL's best at goal prevention.

Despite the fact that the Kings are no longer the possession titans they had been under coach Darryl Sutter, they're still in the top half of the league in that category while remaining stingy with goals allowed. No team is allowing fewer goals per game than the Kings at 2.38. Los Angeles also boasts the NHL's best penalty kill, with an 86.72 percent success rate. Meanwhile, Jonathan Quick is in the midst of his best season since 2011-12, with a .924 save percentage.

While the Kings are tough to score against, they're holding their own offensively despite missing the services of Jeff Carter, last season's leading scorer, since October. Anze Kopitar is on pace for a career year, with 39 points in 34 games, and somehow Dustin Brown is having his best offensive season in nearly a decade. Additionally, Drew Doughty is tied for second among NHL defensemen with 25 points while on pace for his most productive season as well. The Kings are expected to get Carter back in February, giving him enough time to get up to speed and provide some reinforcements for a deep run.