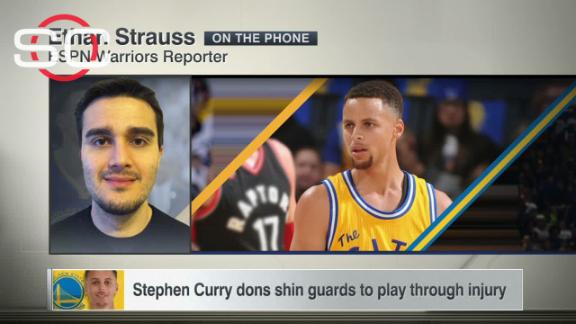 Curry, set to play in Friday night's game, is sporting soccer-style, plastic-coated shin guards meant to protect a nagging shin bruise that has flared up on contact three times in the past four games.

"I've got to bring out my Messi mindset tonight, so we'll see," the reigning NBA MVP said, referring to Barcelona forward Lionel Messi.

The Warriors are attempting to harness their point guard's creativity on the court by dressing his legs in protection fit for the pitch. Curry suffered a shin bruise Dec. 28 against the Sacramento Kings, missed a pair of games and has since aggravated the injury twice: Jan. 2 against the Denver Nuggets and Jan. 5 against the Los Angeles Lakers.

Golden State's medical staff said the bruise would take about four weeks to heal, but Curry said he has no plans to sit out that long.

Instead, Curry will keep playing but use protective gear to prevent re-injury.

"We'll keep trying out stuff till we find something that works," Curry said, "and then once I obviously, hopefully get through this, I'll be back to my normal attire."

Curry said he is trying to find something that protects him from contact to his injured shins without making him feel encumbered by the extra padding.

This also isn't the first time Curry has referenced four-time Ballon d'Or-winner Messi. Curry expressed admiration for the Argentine forward when asked about him in November on a conference call for international media.

"We both have a creative style, a feel when you are out on the pitch or the court," Curry said, adding, "I love watching him play. I'm a big fan, and he's the guy you watch play because you never know what he is going to do at any particular moment."

On Dec. 3, Messi reciprocated the praise, brandishing an autographed Curry jersey on Instagram.

Asked if he played soccer growing up, Curry said, "No, this is as close as I got."