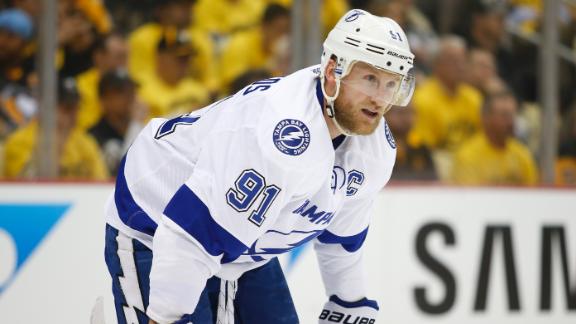 The Tampa Bay Lightningsigned their star captain to an eight-year deal Wednesday, keeping him off the market two days before free agency begins.

"I am excited to move forward with the Lightning today for the next eight years," Stamkos said in a statement. "It's not often that a player gets the chance to spend his career in one organization and I am hopeful that this agreement sets me on that path with the Tampa Bay Lightning. Most importantly, I look forward to working with my teammates, coaches and our management in our pursuit of winning a Stanley Cup."

An NHL source said the contract is worth an average of $8.5 million annually. Only $1 million per year of that, however, is in pure salary; the rest is payable in signing bonuses. The deal also includes a full no-movement clause for all eight seasons, a source said.

"We were just in a little group chat with the boys, and we're all just so excited, so happy that he's coming back," Lightning veteran Brian Boyle said. "Obviously, it's been probably a process for him, but it just shows you the character he has and the kind of guy he is and what he really wanted. We couldn't be more thrilled to have him back. He's our captain, our leader."

Stamkos has spent his entire eight-year career with the Lightning, who drafted him No. 1 overall in 2008. He has scored 312 goals in 569 games since beginning his career in 2008-09, second only to Alex Ovechkin (362) over that span. He has averaged 0.55 goals per game in his career.

Stamkos was the rare franchise player set to hit free agency after contract talks with the Lightning extended into this week's interview window, and the interest in him was intense. The Toronto Maple Leafs, Detroit Red Wings, Buffalo Sabres, Boston Bruins, Vancouver Canucks and Montreal Canadiens were all expected to be in on Stamkos when he hit free agency Friday, but his desire to win a Stanley Cup with the team that drafted him won out.

"We are very appreciative of the effort and commitment that Steven and his representatives have exhibited in getting a deal done," GM Steve Yzerman said. "We are excited to have him as a cornerstone part of the team for the next eight years as we continue in the franchise's ultimate goal of winning another Stanley Cup."

The Lightning advanced to the Stanley Cup finals in 2015. This spring, with Stamkos out recovering from a blood clot, they reached the Eastern Conference finals, falling to thePittsburgh Penguinsin seven games. Of all hissuitors, Tampa Bay was probably the closest to being a legitimate Stanley Cup contender in the short term.

"He has an opportunity, a rare opportunity, to go into free agency at such a young age, and obviously, he had a lot of suitors, a lot of dollar signs pointing at him, but what he wants to do is he wants to win," Boyle said. "He takes being a captain very seriously, and he wants to win. He showed it in Game 7 against the Penguins, coming back and playing. He showed what a captain, a leader, a guy of high character should do. If he's leading the way, you better fall in line because that's the way things are going to go. It's a great strength of our team, and it goes to show you how strong of a character guy he is, and he makes everybody else better for it."

Stamkos was the focus for Yzerman,but Yzerman's work is just starting. The Lightning still need to sign restricted free agent Nikita Kucherov, who had a breakout postseason during Stamkos' absence.

There is also speculation that the Lightning might need to trade a goalie, with Bishop the most likely candidate.

On Friday, the Lightning also can sign franchise defenseman Victor Hedman to a contract extension.

It makes for a busy offseason for Yzerman, but the most challenging deal is done.

Information from ESPN's Joe McDonald and Pierre LeBrun was used in this report.