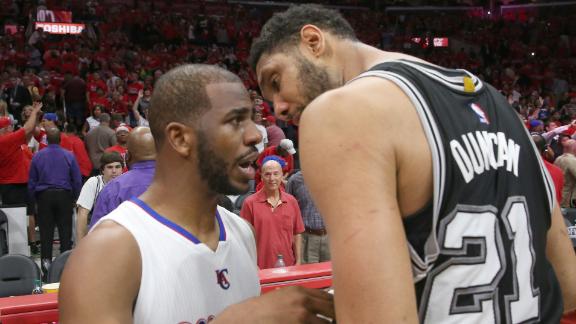 LOS ANGELES -- Of course these two teams would do this on this day. The Los Angeles Clippers, overshadowed in their own city and even their own arena, and the San Antonio Spurs, underappreciated for so much of their lengthy run of excellence, squeezed between the Kentucky Derby and the Mayweather-Pacquiao fight on a Super Sports Saturday, to provide as fine a finish to as good a playoff series as you'll see in the first or any other round. Great enough to lead SportsCenter, use all the Internet bandwidth or trend atop Twitter on any other date in the calendar. Just not May 2, 2015.

You're forgiven if your attention was elsewhere. But if you were fortunate enough to have seen it, you know this was so much more than "Clippers 111, Spurs 109." This is why we watch sports. Not just for Game 7s, but the hope we can get this Game 7. To see proud champions press on long after they've been told to go home. To see the challengers earn their accolades. To see the individual storylines amid the team sport. To see two teams that produced point totals within three points of each other over the course of 341 minutes of basketball in this series push back and forth one last time, through 16 ties and 31 lead changes. Three ties were in the final 2 minutes.

An outstanding matchup got the ending it deserved. And yet the ending almost became secondary. A victor was declared but no champion was crowned. The Clippers won because they grew up, not because the Spurs grew old. Sometimes the NBA playoffs make you wait an entire year to apply your lessons. In this case the Clippers' mistakes in Games 2 and 5 turned into their triumph in Game 7.

It's rare that a first-round series can be life-altering to someone who has won them before, yet there was Doc Rivers saying "I'm a better person because I went through this series," and if you saw this series how could you not nod in agreement?

Paul deserves the singular accolades for the way he came back from a strained left hamstring to score 27 points, including the game-winning shot. The storyline with the most urgency is the one that moved to the forefront. Paul had the most at stake, with the thoughts of that final-minute Game 5 meltdown in Oklahoma City in last year's playoffs still lingering -- not to mention the missed shot that could have won Game 2 in this series. He has more history with the Spurs than any other Clipper, dating back to the time they beat him in Game 7 on his home court in New Orleans, continuing through the sweep at their hands in his first season with the Clippers.

The Spurs had stakes as well. This might not be their last shot, but it's probably their last shot as defending champions. They lamented the opportunity to win back-to-back championships for their aging big three, but saying that the Spurs have never successfully defended any of their five championships is like complaining that there wasn't a Jackson 6. Five is plenty reason to be proud.

Time isn't the enemy for Blake Griffin. He just purchased more anyway. We'd been clamoring for Griffin to play like a superstar, but averaging 24 points and 13 rebounds for the series, not to mention doing little things like drawing a shooting foul out of a busted fourth-quarter possession, means nothing more can be asked of him right now. Besides, he's only 26. Paul turns 30 on Wednesday and is running out of chances to make his mark in the playoffs.

No, this didn't get the Clippers to the conference finals. But Paul kept them from regressing, from going out a round earlier than last year, from the type of negative inertia that afflicted the Portland Trail Blazers this year.

The Trail Blazers, who faced the Spurs in the conference semis last year were bounced by Memphis in the first round this year, and now await the free-agency decision of LaMarcus Aldridge. One scenario floating around the league has Aldridge going to the Spurs and sitting shotgun for Tim Duncan's last ride. They give Kawhi Leonard a maximum contract at about $90 million, keep Tony Parker and come back as strong as ever.

But they'd probably need to say goodbye to Ginobili, among others, to have the cap space to make those maneuvers.

Ginobili, 37, said retirement "could happen easily" for him.

"I still don't know what I want to do and I don't want to make decisions right after the disappointment [of] a game like this," Ginobili said.

It's not hard to imagine Ginobili leaving. It's more difficult to find a reason for Duncan to go, not after he finished off a stellar series with 27 points and 11 rebounds in Game 7. He was as non-committal as Ginobili, though much less expressive.

Coach Gregg Popovich addressed the topic -- and even his own future -- with humor, saying "We'll probably come back. Paycheck's pretty good."

General manager R.C. Buford said: "There will come a time when it's their decision to take a different path, but I don't see anyone in the locker room that's made that decision."

They don't need to make up their minds right now. They also don't need to decide to do a complete overhaul right now. Not after the way they played in this series. The Spurs Way has been to avoid panic in down times, to see the "flowers" -- to use Doc Rivers' pregame word -- and not get lost in the negativity. They were a couple of plays away from winning this series. It was impossible to watch the Spurs in this series and think they're in dire need of repair.

"Usually in the past if we've won a series we've pretty much won it hands down, or if we got beat pretty easily," Popovich said. "Six of the seven games were a grind. It was a little different in that way, but it was a great series. A great series."

So great it warranted that repeat for emphasis. So great that you couldn't blame the Clippers' Matt Barnes for jubilantly jumping on the scorer's table and exulting afterward.

The level of play was so high that Griffin didn't sound out of place when he said, "You almost have to play a perfect game to win these games."

Game 7 was as close to perfect as these Clippers can get. A triple-double for Griffin. Seventeen points and one huge offensive rebound for Barnes. Fourteen rebounds for DeAndre Jordan. Four 3-pointers by J.J. Redick. Sixteen points off the bench for Jamal Crawford and six points and three rebounds for Big Baby Davis. Paul extracting the most from his bad hamstring, laying back while he figured out what he could do, asserting himself in the big moments. Ultimately this series was about maximization.

The reason sports are more lucrative television properties than ever is that they force viewers to watch live, in an era when everything else on TV is moving toward streaming on demand. Yet if ever a sporting event deserved to be time-shifted it was Clippers-Spurs Game 7. Watch it with nothing else competing for attention. Play it in late May or June, the time when the most indelible NBA memories are forged.

Now is not the time for even the victorious Clippers to savor it, not with the opening game of the second round looming Monday in Houston. They are drained and Chris Paul's hamstring is hurt and the Rockets actually finished one game better than the Spurs this season. Physically, the Clippers know their destination, but how can they know where to go mentally or emotionally from here, from the exhilaration of this level of triumph.

"Just the grind of the series, it has to make you better," Rivers hoped. "I don't know how, but it has to, when you go through something like this."

And maybe that bit of wishful thinking summarized and validated what this game and this series were about. At their best, sports make you believe.