The 10 best Home Run Derby performances of all time 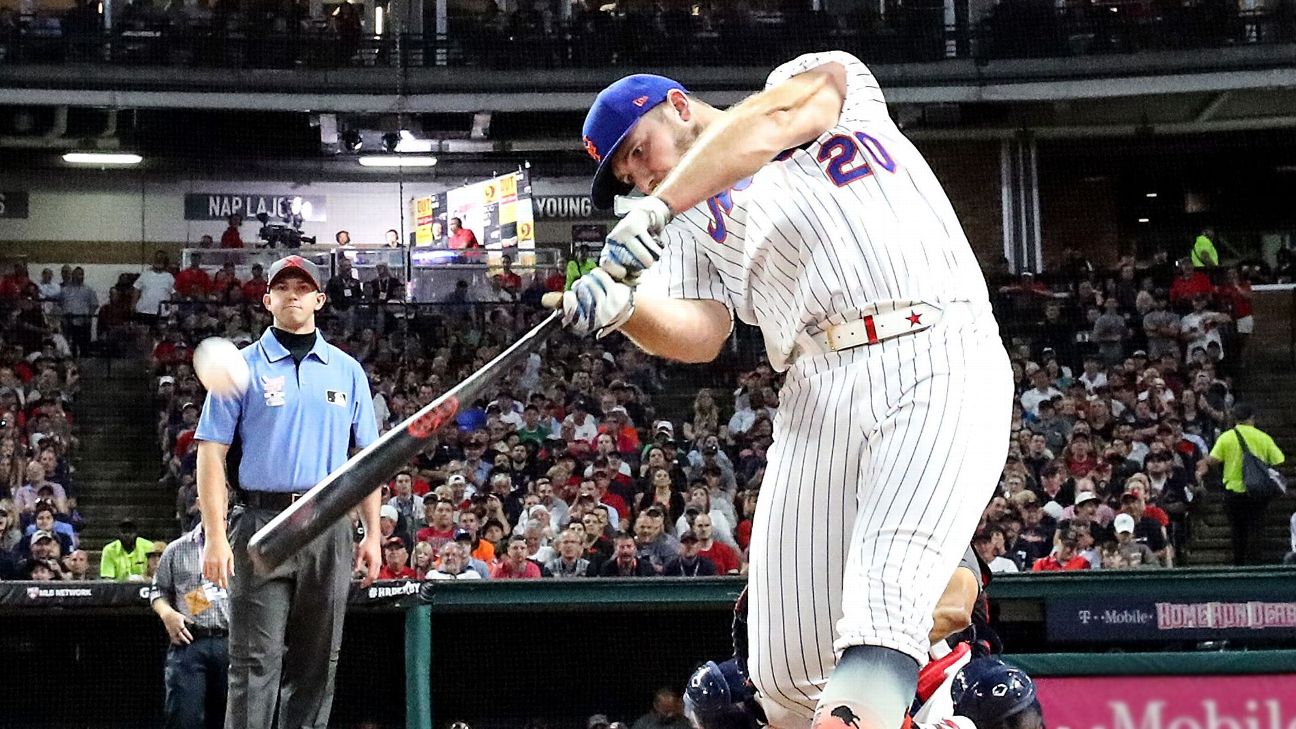 This would have been the opening week for Major League Baseball, but instead we wait for normalcy to return. In the meantime, you can get your baseball fix by checking out some past Home Run Derbies on ESPN2 (March 26, starting at 6 p.m. ET) -- you can rewatch all the theatrics of the 2015, 2017, 2018 and 2019 derbies.

1. Josh Hamilton (2008). In the final season of the old Yankee Stadium, Hamilton was in the midst of a breakout season in his first year with the Texas Rangers, and he told reporters he wanted to launch one out of the ballpark. "You know that little opening [in right field], right there where you can see the subway?" Hamilton joked. "Watch out."

He didn't reach the subway tracks, but Hamilton's first-round performance became legendary. He belted 28 home runs, including a mesmerizing 13 in 13 swings at one point. Seven went at least 500 feet, including a 518-foot blast off the back wall of the bleachers. To put Hamilton's performance into even more awe-inspiring perspective, none of the other participants hit more than eight in the round. Yes, Hamilton lost his mojo in the finals and lost to Justin Morneau, but his first round still stands as a Home Run Derby masterpiece.

2. Vladimir Guerrero Jr. (2019). Guerrero's dad won the 2007 contest, and Vladdy Jr. was a popular -- albeit controversial -- choice for the 2019 contest. He entered the All-Star break with just eight home runs, so many thought he wasn't deserving of the invitation. He proved to be an exemplary choice, revving up the crowd in Cleveland with a historical display of moonshots and lasers.

In the first round, he cracked 29 home runs to break Hamilton's single-round record. Then came the Ali-Frazier showdowns of Home Run Derbies, because in the second round Guerrero battled Joc Pederson to a 29-29 tie after regulation. In the swing-off, both crushed eight home runs in one minute. So we needed a second swing-off. Each slugger got three swings, and each cracked two home runs. The crowd went absolutely wild. We went into triple overtime. "OMG!!!" Vlad Sr. tweeted.

Guerrero hit one home run in his three-swing effort, but Pederson failed to match him, Vladdy finally prevailing 40 to 39. Guerrero embraced Pederson with a big hug.

3. Joc Pederson (2019). Pederson's effort shouldn't go unrecognized, so we can make him 2A. Of course, in the end, Guerrero, like Hamilton, didn't win the contest, as Pete Alonso beat Guerrero 23 to 22 in the finals. It didn't matter. Guerrero saw 207 pitches, swung at 195 and homered on 91 of them. Total distance: 38,641 feet, or more than 7 miles of home runs. He had the seven hardest-hit balls of the night. He finished with 35 more home runs than Alonso. "He was the star of the show," said Blue Jays coach John Schneider -- who served up the 91 home runs.

4. Aaron Judge (2017). The rookie outfielder had become arguably the sport's most popular player in just half a season, entering the break with 30 home runs on his way to a rookie record of 52. (Alonso would break that mark in 2019.) Judge lived up the hype -- and the pressure -- with an impressive display of prodigious power at Marlins Park, including four blasts of 500-plus feet, the only player to reach 500.

In the first round, after Marlins first baseman Justin Bour put up a tough-to-beat 22, Judge edged past Bour on his final swing (although he still had his bonus time remaining if needed). He went on to defeat Cody Bellinger 13-12 in the semifinals and Miguel Sano 11-10 in the finals. His raw totals don't match some others, but that's because he beat Bellinger with 1:02 still remaining on the clock and Sano with 1:53 left.

5. Giancarlo Stanton (2016). Petco Park isn't exactly the best stadium to host a Home Run Derby, but Yellowstone Park couldn't have contained Stanton on this day. Stanton hit 61 home runs on his way to the title, with rounds of 24, 17 and 20. With the Statcast metrics now available by 2016, Stanton's power stood out even more: He hit the 20 hardest-hit home runs of the contest, had the 10 longest home runs and 18 of the 19 longest, and averaged 446 feet per home run.

6. Bobby Abreu (2005). Abreu cranked 24 home runs in the first round, which was doubly impressive because: (A) It came under the old rules when batters had 10 outs to hit as many home runs as they could; and (B) It came at Comerica Park, which has that big ol' power alley in right-center. Abreu's 24 home runs shattered Miguel Tejada's previous one-round record of 15. Abreu's round lasted 17 minutes, and he would go on to win the Derby, beating Ivan Rodriguez in the finals.

7. Pete Alonso (2019). Sure, Vlad Jr. stole the show in the first two rounds, but Alonso won with an impressive showing in the finals. After 14-13 and 20-19 wins -- both with walk-off home runs -- he beat Guerrero 23-22 with yet another walk-off blast. Guerrero went first and set a high mark. Alonso got off to a fast start and then got in a groove. With 1:02 remaining he used his final timeout, sitting on 18 home runs. He hit the winner with 18 seconds left and raised his arms in triumph.

8. Todd Frazier (2015). After a lackluster Derby in 2014 -- the ball really was dead that year -- the rules were changed for 2015, with players now competing in a timed event with an eight-player elimination bracket. Frazier, competing in front of his home fans in Cincinnati, won in dramatic fashion, winning each round by one home run: 14-13 over Prince Fielder, 10-9 over Josh Donaldson and 15-14 over Pederson. Against Donaldson, he homered twice in the final 11 seconds to reach the finals and then beat Pederson in bonus time. OK, so maybe his brother Charlie skirted the rules with some quick-pitch deliveries. The fans went home happy.

9. Bryce Harper (2018). Another hometown winner -- and this one came in perhaps even more dramatic fashion than Frazier's win. Harper had won his first two matchups with identical 13-12 scores to face off against Kyle Schwarber in the finals. Schwarber went first and hit 18. Harper, decked out in his red-white-and-blue American-flag arm sleeve, bandana and shoes, got off to a slow start, but then somehow cranked out nine home runs in the final 50 seconds to tie Schwarber and then launched the winner in bonus time.

10. Mark McGwire (1999). McGwire was the biggest name in baseball the year after he had broken Roger Maris' single-season home run record, and he didn't disappoint the fans at Fenway Park. He belted a then-record 13 home runs in the first round -- including a couple that soared over the Green Monster, over Lansdowne Street (which was packed with fans) and onto the roof of the parking garage, just missing the Mass Pike. McGwire didn't win -- Ken Griffey Jr. took ultimate honors (and his third Derby victory) -- but his first round was the biggest highlight in Derby history for a long time. 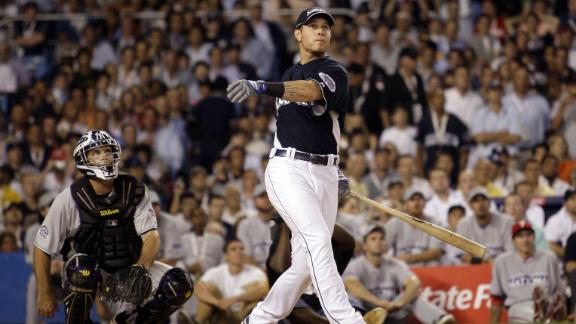 Hamilton hits 13 homers on 13 straight swings in 2008 HR Derby
Josh Hamilton put on a show at the 2008 Home Run Derby, including a stretch of 13 home runs on 13 consecutive swings. 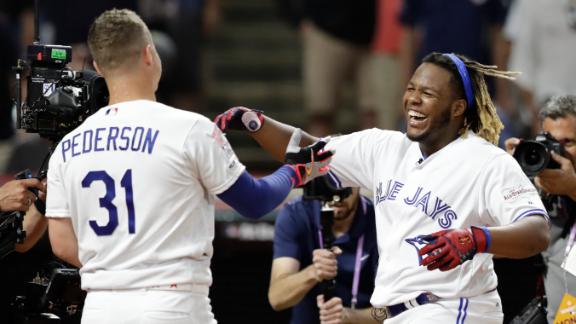 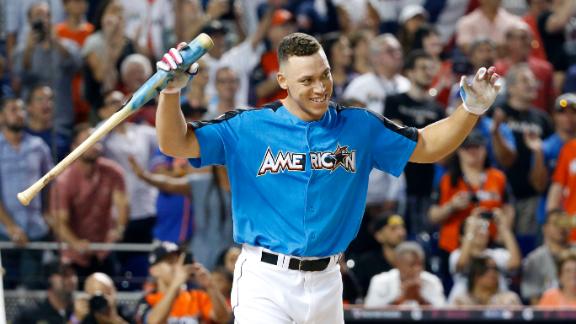 All of Aaron Judge's 500-plus-foot homers at the 2017 HR Derby
Aaron Judge pummeled four homers that exceeded 500 feet on his way to winning the 2017 Home Run Derby. 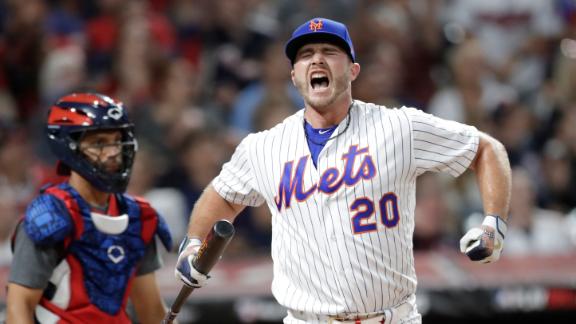 Alonso wins 2019 HR Derby with plenty of time to spare
Pete Alonso receives a Home Run Derby chain after his final big fly of his 2019 win. 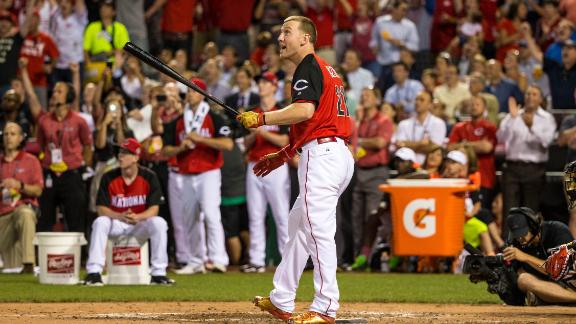 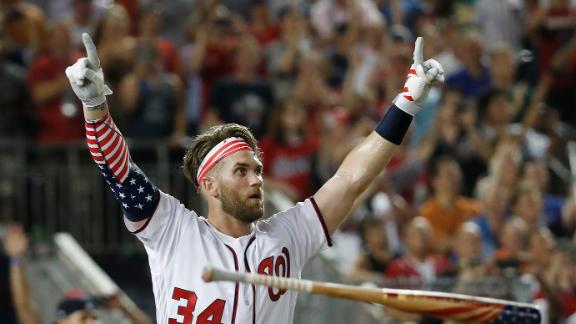