The case for not drafting Shohei Ohtani in fantasy baseball 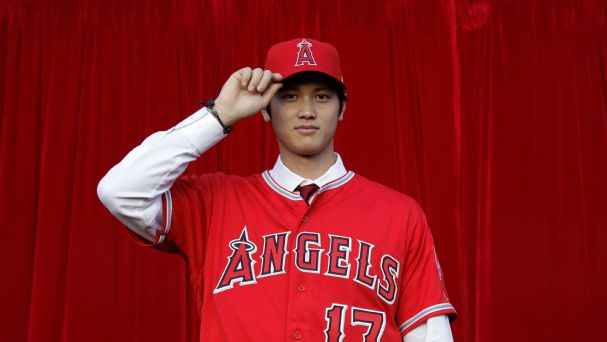 It's rare to see a player with zero major league experience generate as much buzz as Shohei Ohtani has received this offseason. That said, it's easy to see why there's so much excitement surrounding the 23-year-old, especially in fantasy circles. After all, there hasn't been a legit two-way player capable of winning double-digit games on the mound with a sub-2.50 ERA and hitting double-digit home runs with a .300 batting average since another 23-year-old did it a full century ago.

It's fun to imagine Ohtani performing at that Babe Ruth level and perhaps even changing the very nature of the sport in a way that would make Madison Bumgarner and his "power-hitting pitcher" ilk green with envy. If he is able to do that, then he's likely to be a clear-cut No. 1 overall pick for years to come. However, that fantasy is currently nowhere near reality.

Exactly how good can we truly expect Ohtani to be in 2018? It's really hard to even translate his 2017 Japanese League stats into an MLB equivalent because Ohtani was dealing with an injured ankle and ended up pitching in only five games and getting only 231 plate appearances for the Nippon Ham Fighters.

But to project Ohtani's stats in his debut season for the Los Angeles Angels, it's going to be a lot more than simply assuming you can combine the rookie seasons of Darvish and Ichiro and call it a day. After all, not every highly touted import makes a smooth transition to the United States.

Need I remind anyone about Tsuyoshi Nishioka, who in 2011 was coming off a .346 season with Chiba Lotte Marines, or Kei Igawa, who in 2006 received a $26 million posting fee after striking out a league-high 194 batters for Hanshin Tigers? Actually, I probably do need to remind you, as both players eventually returned to Japan after failing to become mainstays with the Minnesota Twins and New York Yankees, respectively.

Let's be optimistic, though, and assume Ohtani's elbow is able to keep up with the expected workload and that he is indeed able to pitch around 140 innings this season. If we give him 10 wins, an ERA of around 3.25 and a K/9 rate of 9.5, I think that would be very fair -- and, on a per week basis, probably slots him in as a borderline top-25 SP. In fact, that's the neighborhood where both my colleagues Eric Karabell and Tristan H. Cockcroft have him ranked.

For points leagues, though, I can't be as bullish. Why not? For one, he's going to pitch 40-50 innings less than most of the top-50 starters and that's a huge point differential to make up. Now throw in all those deductions for walks -- his BB/9 rate will likely be around 3.5, if not a bit higher -- and Ohtani will be fortunate to end up in that top-50 group at the end of the season.

Now, I hear you screaming, "AJ, I also can start him as a hitter! That counts, doesn't it?" Yes, in ESPN leagues, the powers that be have decided that Ohtani will indeed be eligible to be started as either a pitcher or a hitter on any given day (depending of course on your league's deadline for changing lineups). However, you will have to choose one or the other. If you get his pitching stats, you can't get his at-bats. If you go for the batting boost, you won't get his work on the mound.

That might be a fantastic thing if he gets the call in May when the Angels travel to Coors Field. You're certainly going to want to use him as a hitter in that environment and avoid the potential for a high-altitude disaster on the hill. However, for the most part, you're likely to use him as a pitcher when he does pitch and as a hitter when he is in the Los Angeles lineup in between those starts.

In rotisserie and category-based head-to-head formats, that probably bodes incredibly well for you. If he ends up with around 200 plate appearances that end up counting for you, and hits around 10 HR with 50 RBI, that's pretty much "gravy" for his stat total. Unfortunately, it's not nearly as tasty a stat line in points leagues.

In five Japanese seasons, Ohtani struck out in 27 percent of his plate appearances. I think one would have to expect that rate to get worse before it gets better as he makes the adjustment to MLB pitching. So, while an 0-for-4 day won't cost you in counting categories in rotisserie formats (and has zero impact on his pitching stats), in points leagues, you very well could get a run of negative numbers from Ohtani at the plate that does detract from whatever you got from him on the mound.

Is it going to be a ton of fun to grab Ohtani and simply enjoy the ride? Absolutely, and I'm always an advocate for drafting the players you want in fantasy, regardless of rankings, because this is supposed to be an entertaining endeavor. I just can't rank players that way. I have to look at the numbers above all else. In points leagues, that means Ohtani is outside the top 250 and, when all is said and done for 2018, probably not worth drafting at all.
Report a correction or typo
Related topics:
sportsespnfantasy mlbrankingsfantasyfantasy baseballfantasy rankingsdraftnews fantasylos angeles angelsshohei ohtani
Copyright © 2022 ESPN Internet Ventures. All rights reserved.
TOP STORIES
LA County could hit 'high' COVID level in July, prompt return of masks
Here's what to know about the end of CA's eviction moratorium
California late start law aims to make school less of a yawn
LAX expected to be second busiest US airport over July 4th weekend
WNBA's Brittney Griner's trial starts in Russia court
Woman searching for brother reported missing in Redondo Beach
How to stream ESSENCE Fest live on Hulu
Show More
Long Beach softball team headed to state championship
Lawyer: Nipsey Hussle lifted up neighborhood he was gunned down in
Spike in mass-overdoses, teen deaths due to fentanyl, DEA says
Apple's newest CarPlay feature will make buying gas easier
How to save money when buying a new car in an inflated market
More TOP STORIES News