Tim Duncan: Enjoyed ride but basketball at times was 'not fun anymore' 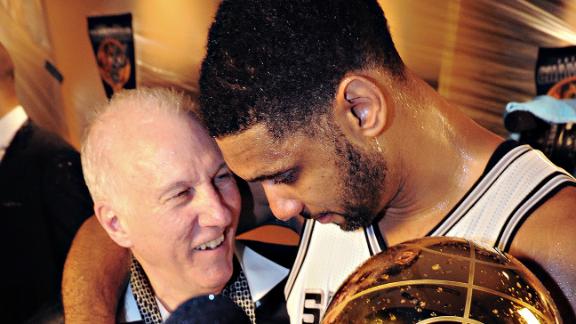 SAN ANTONIO -- Spurs power forward Tim Duncan spoke for the first time on Wednesday since announcing his retirement two days prior, expounding upon his 19-year NBA career and explaining why he made the decision to leave the game.

"I can still do this. I could probably still play," Duncan said in a wide-ranging interview with ViVid Streaming. "But when it's time, it's time. It's time. I started not enjoying myself. It wasn't fun at times. And I always said when that point comes when it's not fun anymore then I'm done."

As hoops fans all over the country spent Monday and Tuesday watching highlights and tributes to Duncan among the various sports television outlets, the power forward spent the day of his retirement watching the Discovery Channel. Duncan's reaction seemed typical of the man of few words, who spent an entire career leading by example, while spearheading theSan Antonio's current culture ofselflessness.

In the days since announcing his retirement, Duncan said he received an outpouring of support from friends and family, as well as from coaches and executives around the NBA. Included among the well-wishers wasGolden State Warriors coach Steve Kerr, who despite playing with Michael Jordan on the Chicago Bulls, once called the power forward the greatest teammate he ever has played with.

"He actually sent me a message and said something along those lines," said Duncan, who won a pair of NBA titles alongside Kerr during Kerr's two stints with the Spurs. "And again, I've gotten some incredible notes, messages, from so many different people that are honestly blowing me away. I didn't expect all of this; didn't expect the reaction I got. But it's been amazing. I've spent the last two days trying to respond to everybody and trying to get back to everybody to make sure I'm thankful for their messages, their words. I did actually get a personal note from Steve."

Spurs coach Gregg Popovich on Tuesday delivered an emotional goodbye to Duncan during a 15-minute meeting with local reporters. Duncan watched the footage of Popovich's interview on Tuesday and admitted, "I about lost it on that one."

Duncan also expressed appreciation for his near-universal standing as one of the NBA's all-time greats -- not just arguably the greatest power forward.

Having won five NBA titles with the Spurs, along with earning two NBA MVP awards in addition to making 15 All-Star Game appearances, Duncan, 40, played his final game on May 12 in the team's Game 6 loss to theOklahoma City Thunderin the Western Conference semifinals.

In what would be Duncan's final NBA appearance, he displayed flashes of his previous All-Star form in scoring 19 points to go with five rebounds and one block in 34 minutes. Just before the fourth quarter with the Spurs trailing, Duncan asked Popovich if he could remain in the game for the final 12 minutes.

As the game concluded and the confetti fell from the rafters, Duncan walked off the court in Oklahoma City waving to the crowd with one finger pointed toward the roof.

Over the years, Duncan took less money in contracts from the Spurs to give the organization more ammunition to field successful teams; he explained on Wednesday that the money had "not ever been a deal for me."

"The good old days when the knees were really good, remember those days?" Duncan said jokingly. "At that point, I believed in what I could do. Being a competitor, I wanted it year after year after year. I remember being disappointed in the years after that, when I wasn't able to be an MVP. But that's just my competitive nature in that respect. But I believed in what I was. I didn't know that was gonna translate in ending up in five championships or anything else. But I knew that I could affect the game. I knew that I could control the game in ways. I knew how to do it.

"It was just about being in the right situation with the right bunch of guys and getting it done."

Duncan also explained his competitive nature, which he always displayed in a stoic manner, without any hit of boisterousness.

"I think I've always approached it in a different way. I think competitiveness is taken in a different way by different people," Duncan said. "So I'm not a yeller and a screamer, a jumper and a pusher. I'm not gonna do all that stuff with my teammates or opponents. But I've been competitive from Day 1. Whether people recognize that or not, I don't know how they can't. I'm not gonna go out there and try to hurt somebody or win at all means. But if it's up in the air, I'm gonna try harder than you to get it done."

Duncan and teammatesTony Parker and Manu Ginobili rank as the winningest trio in NBA history in the regular season (575 wins) and postseason (126). Duncan and Popovich have combined for the most regular-season victories by any player-coach duo in NBA history (1,001). And the forward ends his career as just one of three players in league annals, along with John Stockton and Kobe Bryant, to spend 19 seasons with one franchise.

Duncan said playing alongside Parker and Ginobili meant a great deal to him.

"We took pride in representing where we came from, took pride in being from small places, and places all around the world and being able to come together and make ourselves into a team, into a group of guys with one goal and get that done," said Duncan, who was born and raised on Saint Croix. "A kid from the islands, a kid from somewhere in France, a kid from somewhere in Argentina, and we find ways to get things done. But Pop on top of that, and him having the vision to put us all together to see what we could be. You look back and that's just an amazing feat: to have all these kids from all these different places come together and be what we were."

In the end, Duncan made sure to thank the San Antonio fan base for its support.

"Just thank-you. I don't think there's anything better to say than thank-you," Duncan said. "Over the years, we've been blessed. We've been great about winning games and everything else. We've lost some big ones, lost a couple of chances at championships. But the fans here have just been so awesome in their support and their love for the team. Everybody's always shown such appreciation and love for myself and the team. We have some of the best fans in the NBA -- in sports, in general. I'm so appreciative of that. People come out, people support, people love the Spurs. That's special. That's not everywhere."

Duncan: 'The next chapter will be fun too'
Speaking for the first time since his retirement, Tim Duncan reflects on his career and his future. 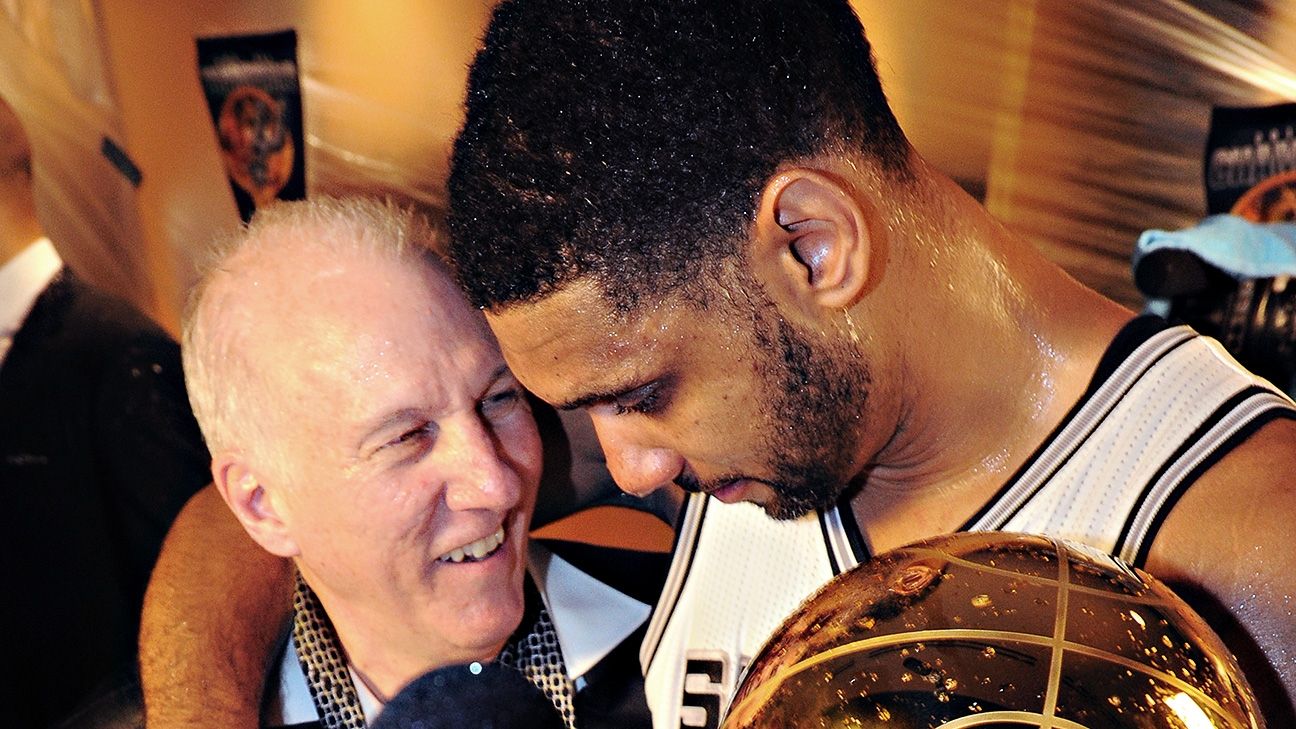 Duncan a Spur for life
Tim Duncan and coach Gregg Popovich reflect on Duncan's career, from being the No. 1 overall pick in the 1997 NBA draft to winning five titles with San Antonio.