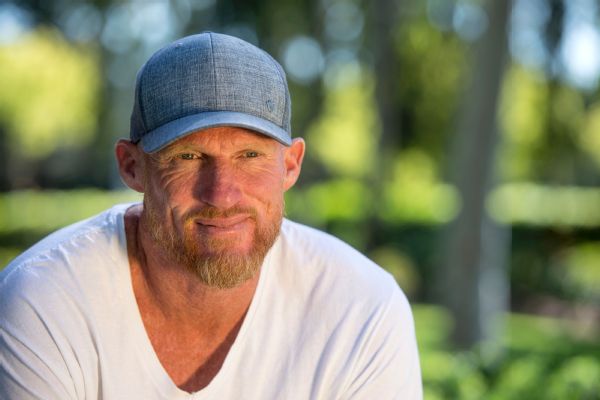 Former NFL quarterback Todd Marinovich, less than one year after being arrested with drugs while naked, wants to play again and is attempting a comeback at age 48.

Marinovich, who served as an assistant coach with the Coyotes last season, said he is "superstoked" to be competing for the starting spot against 25-year-old Jacob Russell when practice begins Aug. 10 in Indio, California.

"It's the greatest game on the planet, and I've been away from it for so long, and I can't think of anything more fun," he said to reporters Friday, according to the Desert Sun. "Recovery has changed every aspect of my life and made it better, so why wouldn't that carry over to the football field?"

The WDFL consists of 16 teams on the East Coast, four on the West Coast and four in South Africa. The league's mission is to "develop players, coaches and staff so they can advance to the next level."

Marinovich said Friday that he's been sober since the 2016 arrest, when he was found naked in a backyard holding a brown bag containing marijuana and methamphetamine. He was cited for trespassing, possession of a controlled substance, possession of drug paraphernalia and possession of marijuana.

He will avoid jail time if he stays out of legal trouble for 36 months.

"I can't really take credit for anything," he told reporters Friday. "The only thing that I was given was the gift of desperation, which it takes to get started. And I am a work in progress. God works in ways that I never really saw until I moved to the desert. I had no idea what I was getting myself into. I just knew I needed help and that I couldn't do it alone."

Marinovich's problems with drugs have been well documented since rising to stardom as a freshman Southern California quarterback in the 1989 season, culminating with a Trojans victory in the Rose Bowl over Michigan.

He was booked for cocaine possession a month after the 1990 Sun Bowl and entered the NFL draft, where he was drafted in the first round by the Raiders.

He was released after two seasons for repeated drug use, cementing his legacy as one of the biggest NFL busts in history.

According to the Orange County Register, Marinovich's rap sheet includes pleading guilty in 1997 to felony charges for cultivating marijuana.

In 2000, he attempted to revive his career with the Avengers and was named to the Arena League's all-rookie team, but he was arrested on suspicion of heroin possession and cut eight months later.

In 2005, he was charged again with drug possession. Two years later, Marinovich was booked for felony possession of a controlled substance, unauthorized possession of a hypodermic needle and resisting arrest.

Marinovich said in the past that he was "hiding a ton" but is no longer hiding anything from anyone.

"When I made several attempts at recovery, I said, 'I'm going to go get treatment and then I'm going to go back to my life,' and that never worked," Marinovich said. "Now my recovery is my life. I've meshed the two, so there's no separation, and really what I've found to be driving the illness that I suffered from was separation.