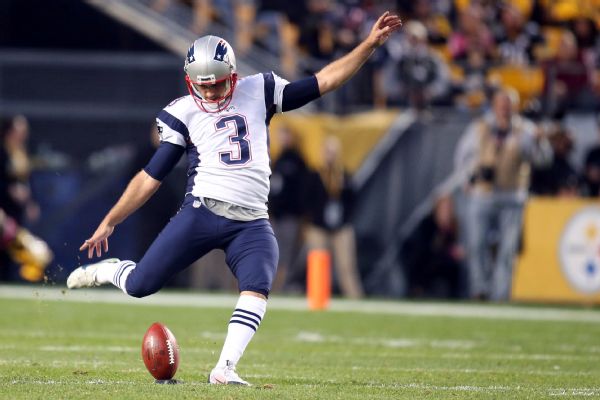 "I just think you show support and encouragement. He's a great kicker. He'll find his rhythm, I don't think anyone is really worried about that," Brady said in a radio interview with WEEI in Boston. "He's one of the best kickers who ever played the game. I have 100 percent confidence he'll find his rhythm."

Following the Patriots' 27-16 victory over the Pittsburgh Steelers, coach Bill Belichick said of his struggling kicker,"We'll work through it."

Extra point attempts were automatic for Gostkowski during the 2015 regular season, the first year in which the NFL adopted rules to make the point-after-attempt a more challenging play at 33 yards.

Gostkowski was 52-of-52 on PATs in the '15 regular season, but things have shifted since he missed one in the AFC Championship Game. He has already missed two this season (in 21 attempts), and is 9-of-12 on field goal attempts after missing three all of the 2015 regular season.

"This is my job, I take it seriously. No one feels worse about screwing up than I do. It stinks to come in when you win and that's all you talk about is the one bad play you had. But that's the nature of the position. You deal with it."