Flores, the first Hispanic coach in the NFL, was nominated in the new coaches category, and Pearson is a senior nominee.

Flores won 91 games against 56 losses (a 61.9% winning percentage), including a record of 8-3 (.727) in the playoffs, during his nine seasons with the Raiders (three in Oakland and six in Los Angeles). His career wins total trails only that of Hall of Famer John Madden in franchise history.

An undrafted free agent, Pearson played his entire 11-year career with the Dallas Cowboys, making three All-Pro teams. He had 489 receptions for 7,822 yards (16 yards per catch). A member of the All-Decade team of the 1970s, Pearson played in 22 playoff games, making 68 catches and scoring eight touchdowns. The 1977 Cowboys won the championship, with Pearson leading the NFL in receiving yards (870) that season.

Both Flores and Pearson will be considered for induction at the Hall's selection committee meeting the day before the Super Bowl. To be elected, each must receive votes from 80% of the 48 members.


"Thank you for the call. You made my day, and you made my life," an emotional Pearson, 69, said near the end of a call from Hall of Fame president and CEO David Baker on Tuesday. "How can I thank you? I'm crying, and I haven't cried in a long time. Happy tears. I've been waiting for this call for so long."

A total of 18 finalists will be considered: Flores, Pearson, a contributor (to be nominated Aug. 25), and 15 modern-era players to be determined later this year and in January. 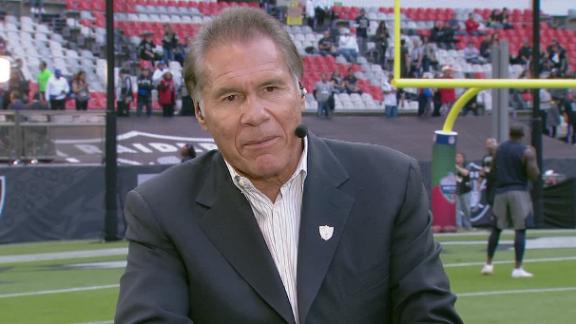 Jim Plunkett was greatly influenced by Tom Flores
Former NFL great Jim Plunkett explains what his relationship with Tom Flores is like and what it was like to be trailblazers with Flores for the Hispanic community in the sport of football.
Report a correction or typo
Related topics:
sportsespnnewsnfllas vegas raidersdallas cowboys
Copyright © 2021 ESPN Internet Ventures. All rights reserved.
More Videos
From CNN Newsource affiliates
TOP STORIES