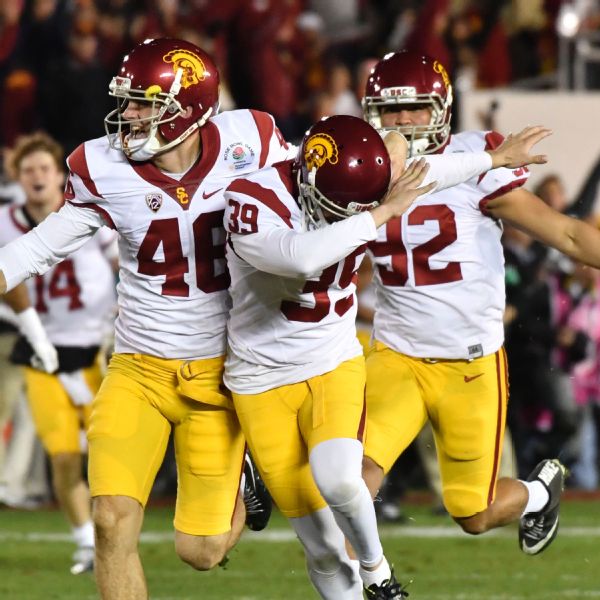 ESPN
By Kyle Bonagura
Former USC Trojans kicker Matt Boermeester's request to stay his expulsion from the university was granted in Los Angeles Superior Court on Friday, but he is still banned from campus and cannot re-enroll in classes this semester, according to the Southern California News Group.

A trial on his petition to overturn the expulsion, filed last month, is scheduled for Jan. 3.

On Thursday, Education Secretary Betsy DeVos, in a speech on campus sexual assault at George Mason University, called Boermeester's suspension a "disturbing case" and an example of a "failed system."

"The young woman repeatedly assured campus officials she had not been abused nor had any misconduct occurred," DeVos said. "But because of the failed system, university administrators told her they knew better."

Boermeester's attorney, Mark Hathaway, made reference to DeVos' remarks during Friday's hearing, according to the Los Angeles Times, but Judge Amy D. Hogue said they would not factor into her ruling.

Boermeester, who is two classes shy of graduation, was kicked out of school in July after a monthslong investigation by the school's Title IX office that concluded he caused physical harm to his girlfriend, USC women's tennis player Zoe Katz, in January.

Katz has vehemently denied the allegations. She sat with Boermeester in court Friday.

"I want to be very clear that I have never been abused, assaulted or otherwise mistreated by Matt," Katz said in a statement in July. "He is an incredible person, and I am and have been 100 percent behind him. Nothing happened that warranted an investigation, much less the unfair, biased and drawn-out process that we have been forced to endure quietly."

In USC's official response to the petition, it asserted that its investigation found Boermeester put his hands around the neck of Katz -- identifying her as Jane Roe -- "causing her to cough, and shoved her into a cinder block wall in the alley near her apartment at least twice" in the early hours of Jan. 21. It also said Katz's initial statement to investigators supported USC's findings.

"When I told the truth about Matt, in repeated interrogations, I was stereotyped and was told I must be a 'battered' woman, and that made me feel demeaned and absurdly profiled," Katz said. "I understand that domestic violence is a terrible problem, but in no way does that apply to Matt and me."

Boermeester was not arrested and is not the subject of a police investigation.

The university's version of events differs greatly from those outlined in the petition, which described the alleged incident as "loud, consensual horseplay and laughing in the alley." The petition says it was viewed, in part, by a USC student through a window. That student told his roommate what he believed to have seen, and his roommate told his father, USC men's tennis coach Peter Smith. Smith is required by law to report any allegations of abuse to school officials, and he fulfilled his obligation.

Boermeester, who kicked the game-winning field goal in USC's Rose Bowl victory in January, was suspended on Jan. 26, at which point he was banned from campus and banned from attending any university activities. Additionally, Boermeester was notified he was not permitted to have contact with Katz "directly or indirectly by any means."

"Neither [Katz nor Boermeester] -- two adults in a consensual, private, romantic relationship -- had any interest in remaining apart," the petition says. USC later charged Boermeester with violating the mandate to avoid contact with Katz.

USC's response, however, says that Katz asked for an avoidance of contact order directing Boermeester not to contact her.

The attorney who filed the petition on Boermeester's behalf, Mark Hathaway, also took aim at the process of the USC Title IX Office.

"USC places the entire responsibility for the investigation, prosecution, fact-finding, and adjudication in the hands of non-sworn, non-licensed individuals who act as police, prosecutor, and judge without an evidentiary hearing," the petition says.