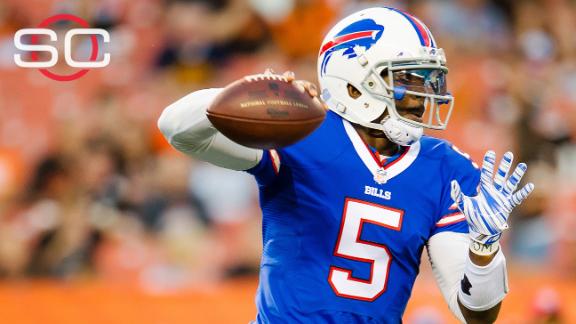 The race to be the Buffalo Bills' starting quarterback is over, as coach Rex Ryan has chosen Tyrod Taylor to start Week 1 against the Indianapolis Colts.

Ryan confirmed his decision Monday, saying he had a "change of heart" from his previous assertion that he would not name a starter during the preseason.

"I thought it was going to help us," Ryan said. "But in actuality, I know the way it is. I know people get bombarded. I don't want our players being bombarded about who's getting reps, all this kind of stuff. ... I'll get that speculation over with, and then we'll move forward."

Taylor, who won the job over EJ Manuel and Matt Cassel, completed 24 of 31 passes for 236 yards in the preseason. Ryan praised Taylor for his explosiveness, also noting that "he's on top of what we're doing."

"Obviously, you know about [Taylor]'s accomplishments as a runner," Ryan said. "I mean, it's very well documented. When you have more rushing yards than Michael Vick at [Virginia Tech], that's pretty obvious that he has that ability.

"But we brought him in because No. 1 -- it's a brand new offense -- but how he grasps our offense, and then his ability, not just his mobility, but his ability to throw the ball was the overriding thing. And I think he did a tremendous job of that."

Taylor, Manuel and Cassel, along with fourth-stringer Matt Simms, all performed well in the Bills' last preseason game Saturday, going a combined 30-for-33 passing for 395 yards and three touchdowns against the Pittsburgh Steelers.

"I have no regrets," Manuel said. "I felt like I did what I was supposed to do, did well in the games. That's what I said I wanted to do well, was perform well in those practice situations. Got an opportunity to go with the [first team] and did well. So that's how it goes."

Simms will start the preseason finale against the Detroit Lions and is expected to play the entire game.

The Bills now face decisions at backup quarterback. Ryan did not reveal whether Manuel or Cassel will become the primary backup to Taylor but maintained Monday that he expects to keep three quarterbacks on the roster -- although he did not elaborate if that would include the possibility of keeping Simms on the practice squad.

"I think you guys can figure it out," Ryan said. "But I'm never gonna say never. Because I'm not gonna do that. But I envision three. I would stand by exactly my words. You can look into the meetings if you want."

Entering his fifth season in the NFL, Taylor has not started a game in his professional career. His last start, as a senior at Virginia Tech in January 2011, was a 40-12 Orange Bowl loss to a Stanford team led by current Colts quarterback Andrew Luck.

Taylor signed a three-year deal with the Bills in March, but that will void to a two-year contract if he plays at least 50 percent of the offensive snaps in either 2015 or 2016. Taylor will have an $833,333 cap number this season and can earn up to $2 million in playing time and playoff incentives.