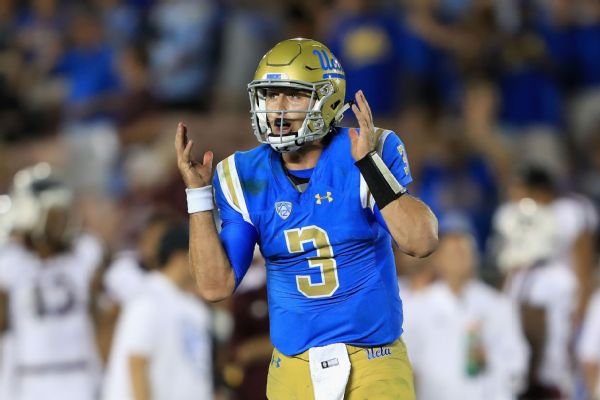 LOS ANGELES -- UCLA quarterback Josh Rosen is on track to play against Arizona State on Saturday after missing last week's loss at Utah with a concussion.

Rosen returned to practice Tuesday morning, and offensive coordinator Jedd Fisch said the junior will be back in the starting lineup provided he clears concussion protocol.

"It was definitely encouraging," Fisch said. "He looked good, he looked good. He practiced good. It's been tough. It's been really six quarters without him and that's always difficult."

Rosen missed most of the second half in a 44-23 loss at No. 9 Washington and did not travel with the Bruins for their 48-17 loss at Utah on Friday night.

Backup quarterbacks Devon Modster and Matt Lynch are a combined 16 of 23 for 149 yards passing with three touchdowns since Rosen got injured. Rosen is averaging 339.1 yards passing per game, which ranks sixth among FBS quarterbacks, and has thrown 20 touchdowns against eight interceptions.

Whoever plays quarterback for UCLA (4-5, 2-4 Pac-12) will be without his top wide receiver as Darren Andrews suffered a torn ACL at Utah. Andrews, a redshirt senior, had 60 receptions for 773 yards and 10 touchdown catches to lead the team in all three categories.

The accumulation of injuries is reflected in UCLA's downturn in production. After totaling at least 408 yards in each of their first seven games, UCLA had 232 yards against the Huskies and 249 against Utah.

"We've definitely lost some guys, but I think we can get back to that. All the way back? I don't know," Fisch said. "That would be probably not giving enough credit to the kids if we can say we can get right back when we don't have Darren Andrews or don't have Caleb Wilson. Those are two major, major factors for us, but we're going to try to."

Winning its final two home games against the Sun Devils and California likely represents UCLA's best route to six wins and bowl eligibility. That might not be the goal UCLA thought it would be chasing in November, but offensive lineman Scott Quessenberry insists the Bruins are still fighting as hard as if they were chasing a conference title.