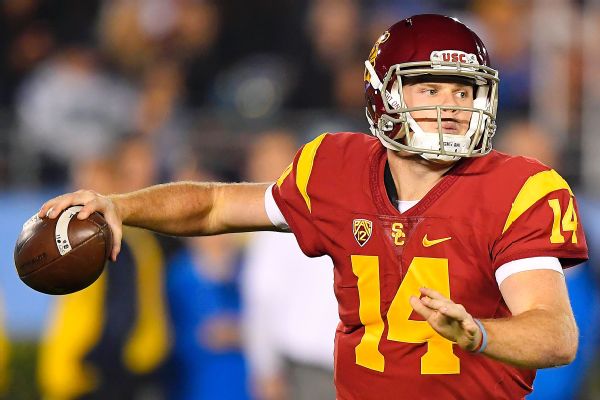 Saquon Barkley of Penn State is the top running back candidate, according to the odds, listed at 20-1. Nittany Lions quarterback Trace McSorley is also 20-1, along with a pair of Alabama stars, quarterback Jalen Hurts and running back Bo Scarbrough.

Darnold took over the starting role for USC after three games last season. After a loss in his first start, he led the Trojans to nine straight wins to close the year. He completed 33 of 53 passes with five touchdowns in USC's thrilling 52-49 win over Penn State in the Rose Bowl. On the season, he completed 67.2 percent of his passes for 3,086 yards with 31 touchdowns and nine interceptions.

In February, William Hill's Nevada sportsbook installed Darnold, Mayfield and Jackson as co-favorites at 7-1. But Darnold has attracted more bets and more money than any other candidate over the last two months at William Hill and emerged as the solo favorite at 6-1. Barkley is second in both tickets and money at William Hill.

Jackson is listed as the favorite at Las Vegas sportsbook operator CG Technology at 7-2.

The Heisman Trophy will be presented on Dec. 9.