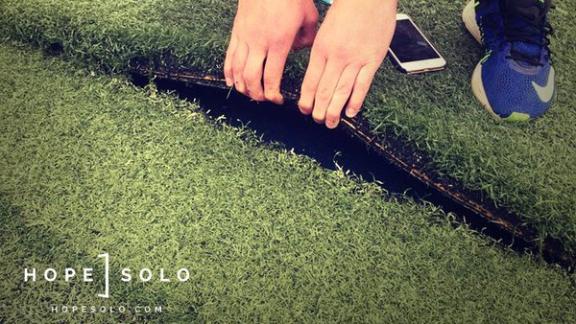 U.S. Soccer has canceled Sunday's women's match against Trinidad & Tobago in Honolulu, saying the artificial turf at Aloha Stadium is "not suitable to hold an international soccer match."

The move comes two days after U.S. women's national team midfielder Megan Rapinoe tore her right ACL while training on a grass practice field that had faced criticism for being in poor shape. Her injury unleashed frustration from U.S. soccer players, who since the World Cup have expressed frustration over the conditions the women play on as compared to the condition of the fields where the men play.

U.S. Soccer said it tested the field Saturday and decided to cancel the match.

"We extend our sincere apologies to those fans who were scheduled to attend the U.S. Women's National Team match in Hawaii," U.S. Soccer spokesman Neil Buethe said in a statement. "Player safety is our number one priority at all times and after a thorough inspection throughout the day, we determined it was in the best interest for both teams to not play the match. We regret not being able to play in front of our fantastic, loyal fans."

Fox Soccer reported that the players decided they wouldn't play because of the field conditions.

Several of the players expressed their concerns via Twitter:

All tickets will be refunded.

The next game of the team's victory tour -- also against Trinidad & Tobago -- is scheduled for 9 p.m. Thursday at the Alamodome in San Antonio.