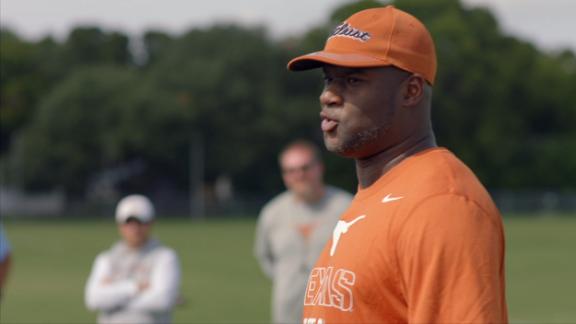 We, as fans and consumers of sports, ask a lot of those we watch.

We want them to be perfect, yet human.

We want them to be ice-cold "gamers," yet still be as emotional about what's happening as those of us who merely watch.

And we really, really want the competitors on the field to be foresworn, natural, fire-breathing enemies, the way we feel about the fans who have the audacity to root for the other side with the same ferocity that we root for ours.

On Jan. 4, 2006, Vince Young and Matt Leinart, the quarterbacks and leaders of the nation's two best college football teams, managed to check all of those boxes ... except for one. They won't ever be checking that one. Not even now, nearly 11 years later, when their teams -- Texas and USC, respectively -- gather for a game and impromptu reunion of those who played in perhaps the greatest game ever played.

"I have never been as focused as I was that night," says Young, who was 22 years old then. Now 34, he can still recall every detail of his second-ranked Longhorns facing the top-ranked Trojans in the Rose Bowl. "But before the game when I saw Matt, I couldn't help but smile. We were both so focused, but even in that moment I was like, 'Wassup, Matt? You ready to play some ball, man?'"

"We were back together just the other day for a TV shoot, just sitting there in the stadium talking for 45 minutes," says Leinart, now he's a college football analyst for Fox Sports. He's also 34. They were born only a week apart in 1983. "I love VY. We'd gotten to know each other in New York at the Heisman ceremony just a month [before the Rose Bowl]. So when we saw each other in Pasadena, it was like, 'Hey man, let's go.'"

The atmospheric molecules that filled the Rose Bowl were in full vibration as kickoff approached. USC had believed that its 30th appearance in the "Granddaddy of Them All" would feel familiarly comfortable. It did not. Texas, having won its inaugural Rose Bowl appearance only a year earlier, believed that experience would dampen the nervousness surrounding this one. The Longhorns were also wrong.

USC was the two-time defending national champion, riding a 34-game winning streak and carrying two Heisman winners, Leinart and the just-crowned winner, running back Reggie Bush. It had survived a nail-biting trip to Notre Dame midseason but had won its other 11 games relatively untested. Texas was riding a 19-game winning streak and was led Young, who'd just finished second to Bush (and one spot ahead of Leinart) in the Heisman vote. It had escaped a first-ever visit to Ohio State with a three-point win but also had won its remaining 11 contests without much of a scare.

"We were watching them all year," Young says of USC. "All the way back in summer practice I would say, 'I'm headed to work out. Anyone who wants to beat USC, come with me.'"

Then-Texas head coach Mack Brown remembers coming into the locker room at Darrel K. Royal Stadium on Oct. 15, 2005, after his team had just disposed of No. 24 Colorado 42-17. His postgame speech was ready to go, but not a single Longhorn was listening. They were crowded around a television, shamelessly rooting for USC to beat Notre Dame.

"They went nuts when USC scored on that play," Brown remembers of the "Bush Push," when Leinart was famously shoved over the goal line by his running back. "They said to me, 'We want them to win all their games, Coach. We want to see them in January.'"

That's when Brown decided to do away with one of the most ironclad rules of coaching.

"You don't ever allow yourselves to look too far ahead," he said. "This particular year, I looked the other way on that rule. This was the game that everyone wanted, and it was certainly the game our two teams wanted. That particular team, that was what motivated them. So, when we got there and the goal was reality, I stood on that sideline before kickoff and I was a total nervous wreck."

Once kickoff occurred, the quarterbacks immediately began fulfilling that first fan demand -- be perfect, but still human. It was an encapsulation of the football legacies of both Leinart and Young: So brilliant, but at times so flawed.

Leinart's first drive was a masterpiece, but the Trojans wouldn't visit the end zone again until the second half. Texas fumbled the ball four times in the game, losing one. A pitch for a touchdown in the second looked as if it should have been brought back because Young's knee had already touched the ground. At the time, it was so controversial that ABC Sports analyst Dan Fouts was incredulous, and a few days later the call was used as evidence to push college football into a standardized set of instant replay rules.

"People forget now that it really took us a half to get going, on both sides," explains Pete Carroll, then-USC head coach, now boss of the Seattle Seahawks. "What people remember is the second half, the fourth quarter. And they should. I remember thinking, 'Man, I think this might be something pretty great we're all in the middle of right now.'"

Which brings us to fan demand No. 2: asking heroes to be impervious to the moment, but also to soak in that moment. Frankly, it sounds impossible. There are only a few times when those on the field admit taking a beat to appreciate their moment in time. In 1975, in the midst of World Series Game 6 (aka the Carlton Fisk home run game), Cincinnati Reds first baseman Pete Rose stunned Red Sox outfielder Dwight Evans when he said, "Dewey, can you believe this game? This might be the greatest game I've ever seen or played in.''

Two years later, Tom Watson famously walked over to Jack Nicklaus in the midst of their "Duel in the Sun" British Open, just prior to teeing off on the 16th hole, and said to his rival, "This is what it's all about, isn't it?" The Golden Bear replied, "You bet it is."

Just one year ago, Clemson head coach Dabo Swinney interrupted his team's huddle to decide the would-be national-title-winning play to say "What a game! Can you believe we get to be here tonight?!"

Such moments don't happen much, as sentiment and emotion are understandably lost in the constant mental resetting that comes with the business of trying to win a championship.

For Young, that moment indeed happened. And it came just before his moment happened.

Having just dashed for a 17-yard touchdown that cut USC's lead to 38-33 with 4:03 remaining, Young stood on the sideline and watched as the Trojans faced a fourth-and-2 at the Texas 45-yard line. Carroll sent in a running play to bulldozer Lendale White, a play that the Horns hadn't stopped all night.

This time, White came up a yard short, giving Young and the offense the ball at midfield with 2:13 on the clock. "Before I could get out there, the defense coming off the field came right for me," Young says. "They grabbed me and said, 'Vince, we got you the ball back. Now take care of business.'"

As he walked out to his position for what he knew would likely be his final drive of the night, Young walked a little slower than normal. He did a soft 360, a little twirl to take in the panorama of college football's greatest coliseum. He wasn't playing the greatest college football game of all-time, not yet. But he knew that if he did what was planning to do, it just very well might become that.

"It was so loud and fans for both teams were so into it, it was like we were all out there together," Young recalls. "I definitely understood that this was a special night. It was just different. We all got it, I think, at that point. But then, the second you clap your hands, it's time to go to work."

History tells us how that work turned out. We can all still hear play-by-play great Keith Jackson: "Fourth-and-5 ... the national championship on the line right here ... he's going for the cornerrrrr ... he's got it! Vince. Young. Scores!"

Forgotten now, lost to the editing of highlight reels, is that there were still 19 seconds remaining.

"People ask me all the time, what was my reaction when VY scored that touchdown, and then the two-point conversion," Leinart says. "I always remind them, I still had work to do, too."

Young needs no reminding: "They've got two Heisman Trophy winners and an offense that averaged 50 points and 500 yards a game. People remember me celebrating that touchdown, but if you watch the whole thing you see me get back to the sideline quick. I had to see what Matt did."

Matt found Reggie, Heisman to Heisman, and had his team well past midfield with eight seconds remaining. But the final play of the game chewed too much time off the clock. The greatest game was over. Texas had won.

That brings us to that third and final fan demand -- the one about the foresworn, natural, fire-breathing enemies. Sorry, folks, that never happened. It's never going to happen.

In his immediate postgame, on-the-field interview, Leinart said something he still regrets. He told reporters that he still thought his was the better team. He says he still receives flak for that to this day. But that's not what Vince Young remembers.

"I was going crazy and then there was Matt. He grabbed my hand was like, 'Man, you can believe that game just now?' And I couldn't. I really couldn't."

Later, after the trophy ceremony was over and confetti cannons were spent, Brown was relieved to finally make it back to his locker room to address his team. But before he could start, someone tapped him on the shoulder. He had two visitors waiting at the door: Reggie Bush and Matt Leinart.

"I just didn't hesitate for one second to go over there and just pay our respect, man. I had nothing but respect for that team and those guys. Our locker room was right there by theirs and we had to let them know," Leinart says. "As tough as it was to swallow, that game, that moment, to be a part of that, it was just too cool. We'd all just experienced that together. We wanted them to know that."

The decade-plus that has followed for Leinart and Young has been like their Rose Bowl performances -- sometimes perfect, sometimes flawed. Both did some time in the NFL, but neither did much. Both took gigs as TV analysts, though Young left his seat at the Longhorn Network to keep pursuing pro football in Canada.

They are now indeed friends. Not the kind of friend you check in with all the time, but the kind you speak with when an occasion arises that provides a nice excuse to pick up the phone or pay a visit. This weekend's game at the Rose Bowl, the first between their schools since Jan. 6, 2006, is the greatest excuse of all, via the greatest game of all.

"No matter what we both do, we'll always be connected by that night," Young says. Then the legend laughs. "And whenever we do get connected, I will always remind him of the final score." 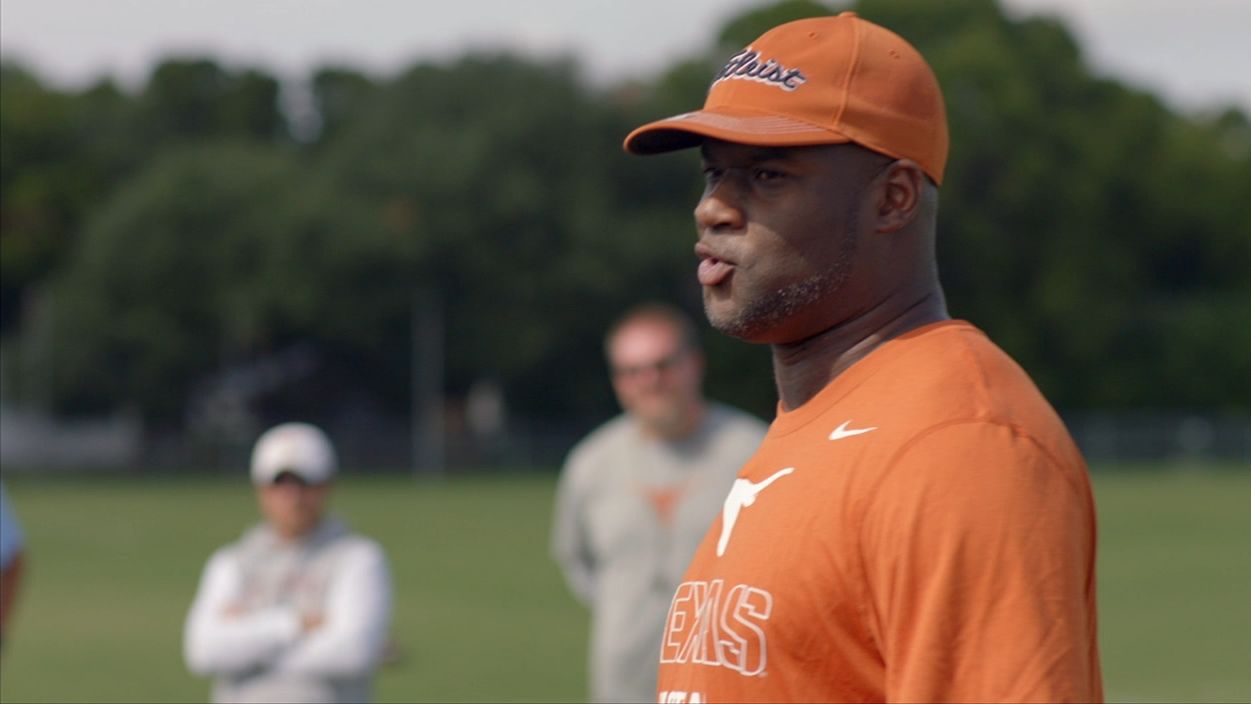 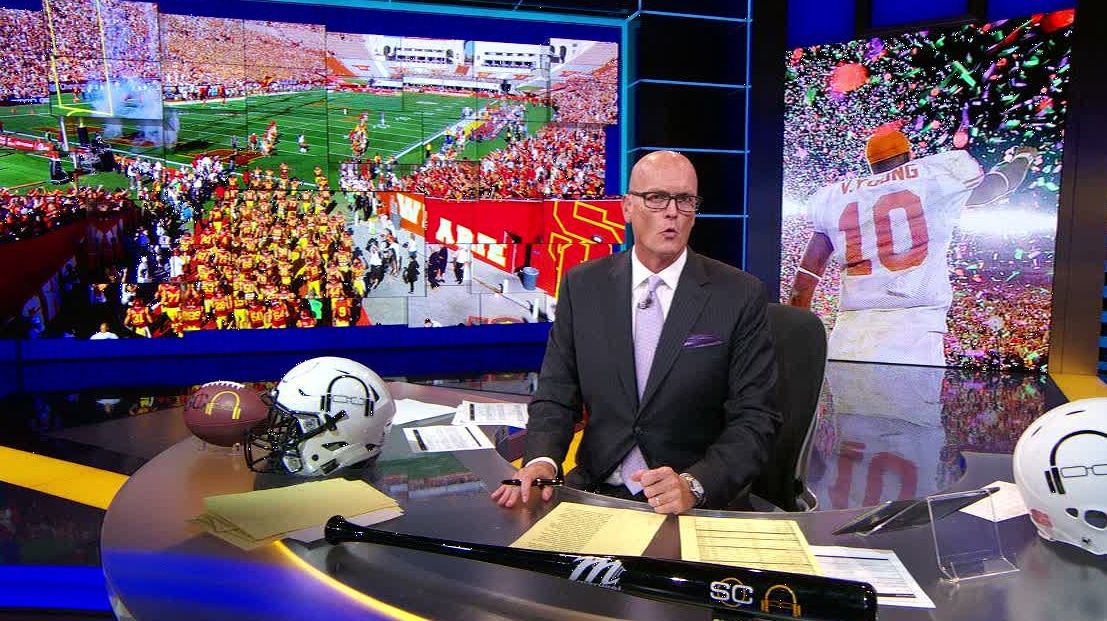