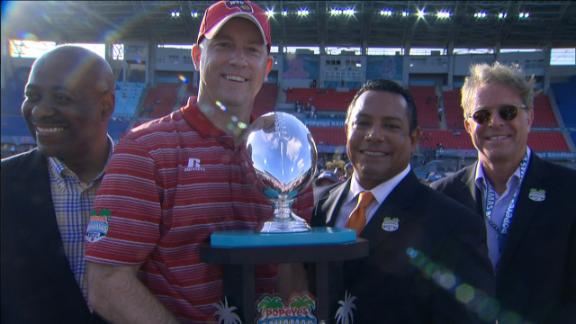 NASSAU, Bahamas -- Western Kentucky knows its defensive blunders on what became the final touchdown of the Bahamas Bowl will stay on highlight reels for a long, long time.

That's fine with the Hilltoppers -- because they found a way to hang on for an unforgettable win.

Wasting nearly every bit of a 35-point lead and giving up the most improbable of touchdowns on the final play from scrimmage, Western Kentucky overcame a record-setting seven touchdown passes from Cooper Rush and beat Central Michigan 49-48 on Wednesday in the first bowl game played outside the U.S. or Canada since 1937.

"There's been a lot of twists and turns to all of our games," Western Kentucky coach Jeff Brohm said.

Central Michigan (7-6) scored the final five touchdowns of the game, including a three-lateral, 75-yard dazzler on the final play where six Chippewas -- one center, one quarterback and four receivers -- touched the ball. Officially, it went down as a touchdown pass to Titus Davis by Rush, his seventh scoring toss of the day, one more than anyone had ever thrown in any bowl game.

Central Michigan went for a 2-point conversion and the win, only to have it broken up by Western Kentucky's Wonderful Terry.

"I want to tell Central Michigan that's one heck of a job by them," Brohm said. "They showed the heart and spirit that this game is all about."

Here's how the miracle happened:

The Chippewas got the ball on their own 25 with a second remaining after a punt, trailing 49-42. Rush threw deep to Jesse Kroll, who caught the ball between three defenders at the 29. Kroll advanced the ball slightly before lateraling to Deon Butler, who got the ball to Courtney Williams just before getting tackled.

Williams then tossed the ball to Davis, who caught it at the 15 and outran three Western Kentucky players to the end zone, reaching to knock over the pylon as he fell out of bounds to complete the bizarre play.

Central Michigan coach Dan Enos said he originally planned to kick the extra point. He then changed his mind, a decision that's surely going to be debated.

"Cooper had thrown seven touchdown passes already in the game, so we figured he was pretty hot," Enos said. "We didn't want to go to overtime because we had trouble stopping them all day. We thought we had momentum so we'd try to win the game."

When the conversion pass hit the ground, only then could the Hilltoppers exhale.

"It was a roller-coaster ride," said Western Kentucky quarterback Brandon Doughty, who threw five touchdowns pass to increase his nation-leading total to 49 on the season. "We were just lucky and blessed that we got the win."

The ending largely overshadowed a huge day by Doughty, who threw for 486 yards.

Rush threw for 485 yards. He never had more than three touchdowns in a college game, and wound up being credited with five in the final 12 minutes for the Chippewas.

The teams finished with 1,254 yards of offense, 647 by Western Kentucky. McNeal caught five passes for 155 yards for the Hilltoppers, who got 95 yards rushing from Wales.

Davis had 147 receiving yards and four touchdown grabs, including the one on the final play, for Central Michigan. The finish was one that Brohm understandably likened to the infamous Stanford-Cal, multi-lateral finish with the Cardinal band already on the field -- known simply as "The Play" that gave the Golden Bears a 25-20 win in 1982.

"This one may have been even better," Brohm said, "other than there wasn't a band on the field."

This game was the first of a planned run of at least six years of bowl matchups in the Bahamas.

They'll be hard-pressed to see another one like this. 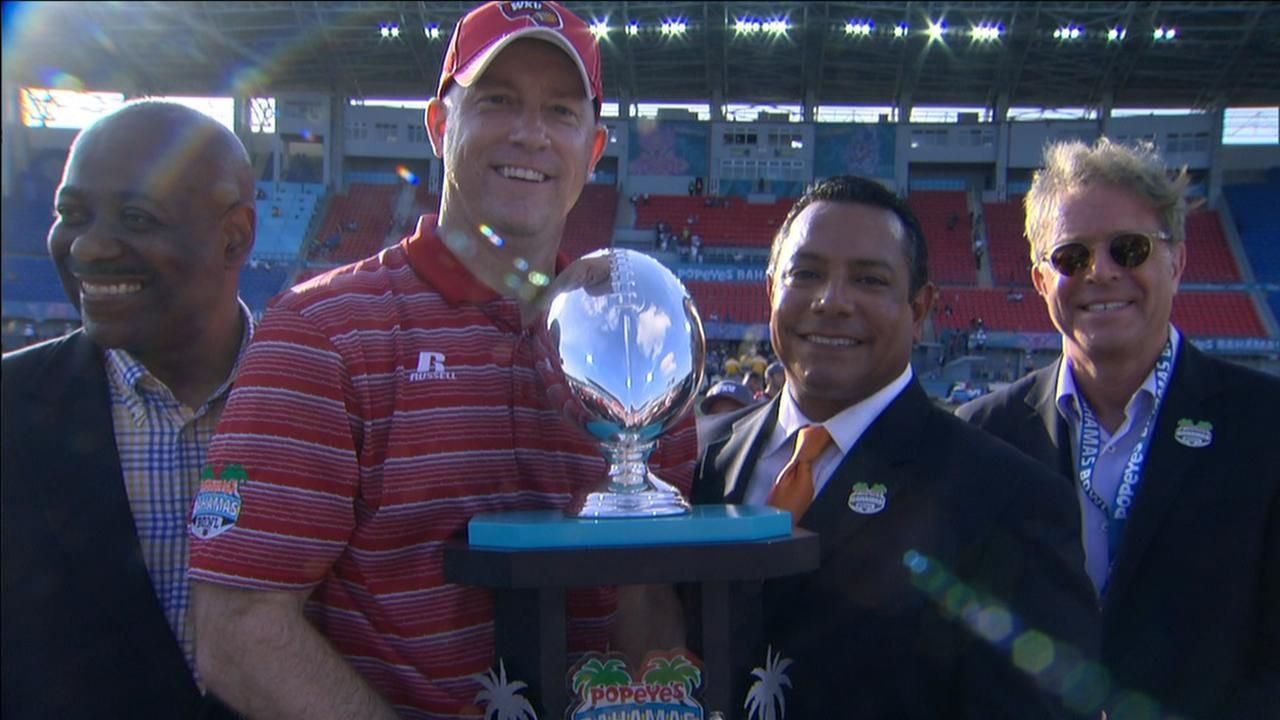 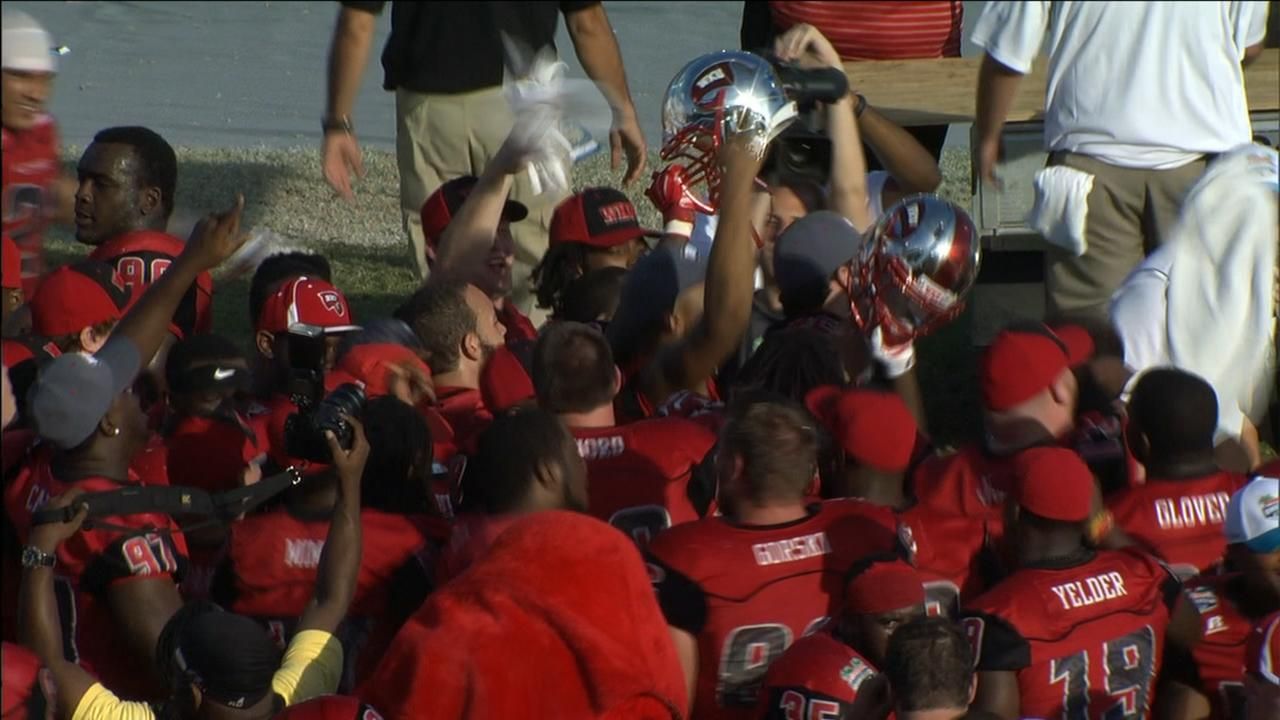 Living Through A Wild Finish
Former Stanford player Rod Gilmore, who lived through the finish of the band on the field play from the 1982 California-Stanford game, compares that game's finish to the final plays from the 2014 Bahamas Bowl.

Central Michigan Pulls Off Wild Hail Mary
Central Michigan QB Cooper Rush threw an 75-yard touchdown pass to WR Titus Davis for an amazing Hail Mary to get within one of Western Kentucky in the Popeyes Bahamas Bowl.

Living Through A Wild Finish
Former Stanford player Rod Gilmore, who lived through the finish of the band on the field play from the 1982 California-Stanford game, compares that game's finish to the final plays from the 2014 Bahamas Bowl.