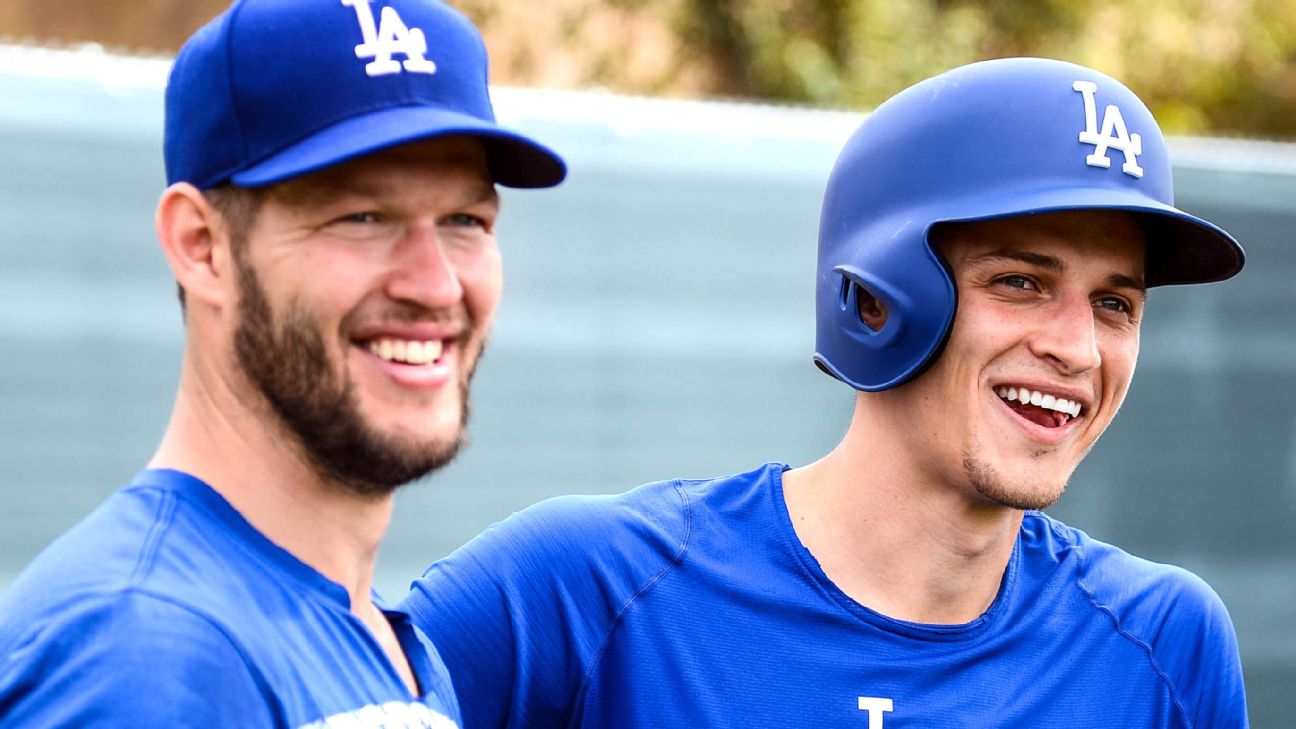 The offseason is always about waiting ... waiting for baseball to be back. But this offseason has had even more waiting than usual, as we waited more than three months for Manny Machado to sign, and we're still waiting for Bryce Harper.

But now the wait is over (sort of). Games will be played throughout Florida and Arizona beginning Friday.

We know one of the big stories of spring: Machado is heading to Peoria, Arizona, suiting up for the suddenly much-more-interesting San Diego Padres. As teams kick into gear this weekend, here are some between-the-lines things to look for over the next 30 days.

Jump directly to: Position battles | Players with something to prove | What we love about baseball!

Seager was one of the best all-around players in the league his first two seasons, finishing third in the MVP voting as a rookie in 2016 and following up with another All-Star season in 2017. He missed most of 2018 after Tommy John surgery and hip surgery that left him on crutches as he watched the Dodgers in the World Series. He's showed up to camp slimmer, having cut dairy from his diet and spent the offseason in Los Angeles working on strength and agility.

What remains to be seen: Can he reclaim his position as one of the best players in the game? Until he cuts loose with the first throw from deep in the hole, we won't really know for sure, and the Dodgers remain noncommittal about whether Seager will be ready for Opening Day. As one of the game's young stars, let's hope he'll be back ... and maybe even better.

Aside from Seager, the Dodgers will have a fascinating camp to watch. Yasiel Puig is gone and so is Matt Kemp. Walker Buehler appears ready to challenge Clayton Kershaw as staff ace. Kenley Jansen is coming off offseason heart surgery (and a season in which his usually lethal cutter sometimes abandoned him). Who will step up in the bullpen? Is Max Muncy the real deal after his 35-homer season from nowhere?

Getting to two consecutive World Series isn't easy. Getting to a third straight will be even harder. As they say, however, it begins in spring.

We might not actually get an answer to this in spring training. Manager Alex Cora said the other day that he'll see who gets the ball March 28 -- Opening Day -- and hopes that will be the person who takes the job, end of discussion. On the other hand, it's certainly possible that somebody could lose the job with a poor spring training. Matt Barnes would seem to be the leading candidate, but Ryan Brasier (dominant in 33 innings last season) and Tyler Thornburg (who was great for the Brewers back in 2016 and is healthy again) also are candidates.

The Brewers re-signed Mike Moustakas, and after they acquired him last July, Moustakas played third and Travis Shaw shifted over to second base. Manager Craig Counsell said the other day, however, that they'll try Moustakas at second to see if he can handle the position. It makes sense for two reasons:

1. Shaw is the better defensive third baseman (plus-18 defensive runs saved the past two seasons compared to minus-5 for Moustakas). If you play Moustakas at third and Shaw at second, in one sense you're making yourself worse at two positions: third base (downgrading from Shaw) and second base (likely downgrading from, say, Hernan Perez to Shaw).

2. With the shift, especially against left-handed pull hitters, teams increasingly feel they can hide somebody at second base.

That doesn't mean Moustakas ends up there. The Brewers might decide the difference there between Shaw and Moustakas isn't worth the risk (and it's not as if Moustakas is terrible at third).

These used to be a rite of spring, but they are pretty rare these days as front offices prefer to have their starting positions locked in and have learned not to overrate spring-training performance. Still, there are a few things we might learn:

Padres outfield. Wil Myers and Manny Margot appear to be locks -- Myers because of the long-term contract commitment and Margot because of his ability to play center. That leaves Franmil Reyes and Hunter Renfroe, two right-handed power hitters, battling for right field. Reyes was the Padres' best hitter in the second half last season as a rookie, while Renfroe hit 26 home runs in 403 at-bats (although with a .302 OBP). Renfroe is the better defender, but Reyes has intriguing upside. Then you have tooled-up Franchy Cordero and speedy backup Travis Jankowski. Look for a trade somewhere here.

Rockies second base. Ryan McMahon enters as the favorite, with Garrett Hampson perhaps settling into a utility role, but don't underestimate the speedy Hampson. Of course, top prospect Brendan Rodgers waits in the wings.

Yankees first base. Don't assume there will be a platoon with Greg Bird and Luke Voit. The way Voit mashed after coming over to the Yankees -- .333/.405/.689 in 148 PAs -- Bird might have to earn that platoon spot.

Indians outfield. A cast of many, none of whom exactly inspires great confidence. Maybe they should trade for one of those Padres guys.

Reds center field. The Reds are trying top prospect Nick Senzel in center field, betting on his athleticism even though he's never played the outfield as a professional. The other options are Scott Schebler, who started 14 games there last season, or Puig, but you hate to move him out of right. Senzel probably starts the season in the minors regardless, but if he can handle center, he should be up quickly.

These two both reached the majors in 2005 and have been two of the best starting pitchers of their generation. Wainwright is 148-85 with a 3.32 ERA and 34.3 career WAR while King Felix is 168-128 with a 3.34 ERA and 51.0 career WAR. This could be the end of the line for both of them, however. Wainwright re-signed with St. Louis on a one-year deal but made just eight starts last season, and his last good season was back in 2014. Hernandez has been unable to adapt to his declining velocity. He went 8-14 with a 5.55 ERA last season and hasn't made 30 starts since 2015.

The Cardinals have backup options in the likes of Alex Reyes, Austin Gomber and Daniel Ponce de Leon, while the Mariners have prospects Justus Sheffield, Erik Swanson and Justin Dunn waiting in the wings. Still, if the Cardinals are to return to the playoffs after missing the past three seasons or if the Mariners are to surprise, they'll need production from the old warhorses.

We will have baseball, in all its beautiful forms. Clayton Kershaw snapping off a curveball and Max Scherzer whipping off a 1-2 slider to make some opposing hitter look silly. Jose Altuve, all 5-foot-6 of him, barreling up a pitch. The phenoms will be in action -- Vladimir Guerrero Jr. and Ronald Acuna Jr. and Juan Soto. We'll see Ichiro Suzuki, 45 years young. Mookie Betts will show us some form of baseball perfection, his attention to detail and practice manifesting itself in games. We can get our first glimpse of Aaron Judge and Giancarlo Stanton, and start projecting their home run totals, wondering if that 50-50 season that didn't happen in 2018 could in 2019.

We'll see players in new uniforms: Paul Goldschmidt with the Cardinals, A.J. Pollock with the Dodgers, Patrick Corbin with the Nationals. And those are just the ex-Diamondbacks. I'm excited to see the Rays, to see how their strong second half pushes them into 2019. I want to see Robinson Cano slashing line drives for the Mets and Jose Ramirez lining smashes for the Indians and Byron Buxton chasing down fly balls for the Twins and Mike Trout just being Mike Trout. 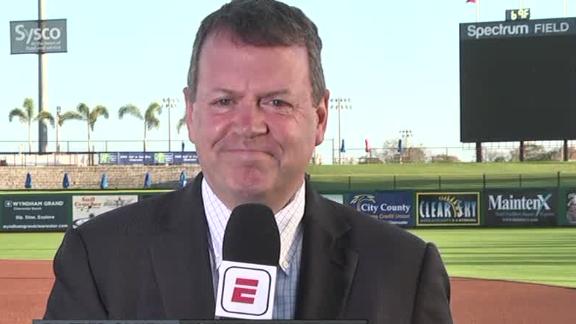